MADRID (AP) — Six Catalan lawmakers were testifying Thursday before a Spanish judge over claims that they ignored Constitutional Court orders and allowed an independence vote in Catalonia’s regional parliament.

The Catalan parliament’s speaker, Carme Forcadell, was the first to be questioned by Supreme Court judge Pablo Llarena and two prosecutors. Together with five other members of the parliament’s governing body, she faces possible charges of rebellion, sedition and embezzlement.

Under Spanish law, the crimes are punishable with up to 30 years of imprisonment.

The judge is set to decide after questioning them if any preventive measures, including ordering them to be taken into custody, are to be applied while the investigation continues.

The Oct. 27 independence declaration in the Catalan parliament was boycotted by most opposition lawmakers but held despite previous court rulings. It was passed by 70 votes to 10 in the 135-seat legislative body.

Shortly after, Spain’s central authorities seized control of the wealthy northeastern region, making it the first time in four decades since the end of Gen. Francisco Franco’s dictatorship that Madrid removed powers from any of the country’s 17 regions. 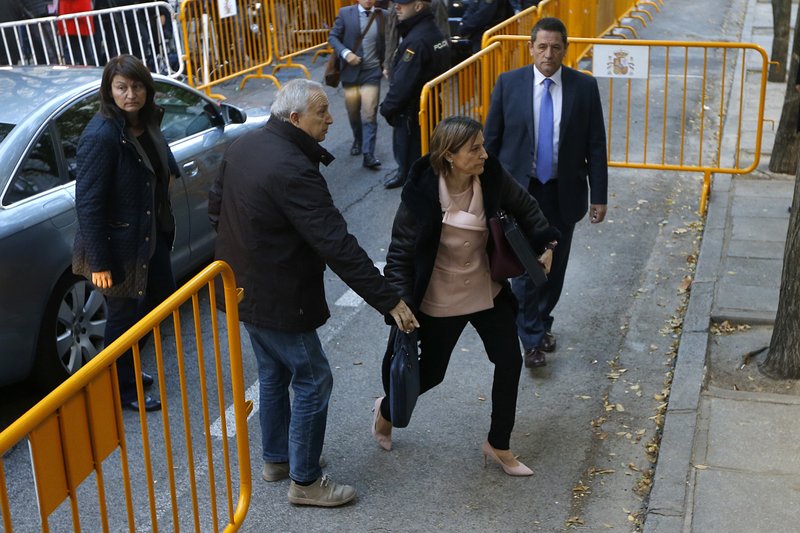 Spain removed the regional government, dissolved the parliament and called a new regional election for Dec. 21.

Forcadell, the speaker, told prosecutors that parliament’s independence vote was merely “declarative and symbolic,” lawyers familiar with the Supreme Court proceedings said. They said her testimony was designed to minimize liability if she is charged for having disobeyed orders from the Constitutional Court.

The lawyers asked not to be named because they weren’t authorized to speak publicly about the court proceedings.

Catalonia’s deposed regional president, Carles Puigdemont, and four of his dismissed Cabinet members fled to Brussels, where they are fighting Spanish arrest and extradition orders.

In a letter posted on social media Thursday, the five made a call for support for pro-secession parties in Catalonia’s upcoming regional election

“It’s time to drive away from the (Catalan) institutions those who want to own them with a coup d’etat,” Puigdemont tweeted, referring to Spain’s decision to take control of Catalonia’s powers.

Puigdemont, who is likely to run as the candidate for his center-right PDeCAT party, says he went to Belgium to rally European support for the Catalan cause and that he’s not trying to evade justice.

Although no country has publicly sided with them so far, their presence in the Belgian capital is sowing divisions among politicians. In Thursday’s letter, the ousted Catalan Cabinet criticized the European Union for turning a blind eye to the Catalonia’s plight.

“The time that we spend behind Spanish bars or in exile won’t be in vain if we remain united in the defense of Catalonia and in denouncing the democratic decadence of Spain,” the letter said.

Spanish Prime Minister Mariano Rajoy said Thursday his government’s policy on Catalonia has the “100 percent backing” of other EU countries.

Rajoy said during a visit to the city of Salamanca, about 220 kilometers (135 miles) northwest of Madrid, that he hopes voters “meet their obligations as Spaniards and Europeans” in next month’s early regional election. He said “a lot will be decided” by the ballot and urged a big turnout. Rajoy believes most Catalans don’t want to break away from Spain. 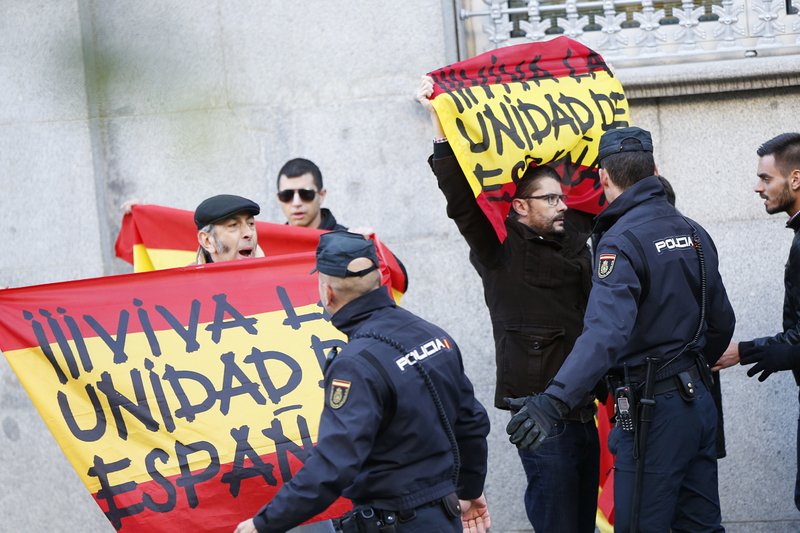 European Commission President Jean-Claude Juncker, who has given Rajoy his public support, said nationalist urges are “a poison” which harm the European Union’s efforts to speak with one voice on the world stage. In what appeared to be indirect rebukes of the effort by some Catalan leaders to achieve independence, Juncker said during a trip to the Spanish city of Salamanca that nobody has the right to undo the EU’s model of coexistence.

Eight members of the now-dismissed Catalan Cabinet and two activists have already been jailed as the country’s National Court studies whether to charge them with various crimes related to an alleged roadmap to achieve secession from Spain.

One more official was released on bail, but remains a suspect in the investigation.

Forcadell remains the parliament’s president, heading a commission of two dozen lawmakers during the transitional period to next month’s polls.

The Supreme Court judge delayed her questioning for more than a week after attorneys argued that they weren’t given enough time to prepare the defense.

Around 100 supporters chanted “You are not alone” as the lawmakers entered the Supreme Court building in central Madrid on Thursday, while police kept at bay a handful of anti-independence protesters carrying Spanish flags and shouting “You don’t fool us, Catalonia is Spain.”

Fina Surina, 48, had traveled overnight for nine hours from the Catalan town of Besalu to accompany the lawmakers.

They “are making a great personal sacrifice in the long-run struggle for independence,” she said.

Catalonia, with 7.5 million people, represents a fifth of Spain’s gross domestic product. Polls shows that Catalans are roughly evenly divided over whether to seek independence or remain part of Spain.