BRUSSELS (AP) — A Belgian prison inmate who killed four people while on furlough committed “terrorist murder” and likely intended to cause more harm, prosecutors said Wednesday as authorities searched for possible accomplices and the Islamic State group claimed responsibility for the bloodshed.

The convict who stabbed two police officers in the city of Liege and used their handguns to kill them and a bystander was a “soldier of the caliphate,” IS said in a brief statement on the site of its Aamaq news agency.

Such wording is typical of the claims IS makes even when slaying suspects have not been linked directly to the terror group. Belgian authorities have not said if they have evidence the inmate had vowed allegiance to IS or was acting on its orders.

Interior Minister Jan Jambon noted that Benjamin Herman, the Belgian national named as the Liege killer, killed a fourth person on Monday night away from the eastern industrial town.

Herman, 31, a convert to Islam, was known to local authorities as a repeat offender involved in petty crime and drugs. He spent most of his time in prison since 2003 and was on a two-day leave when he launched his attack. Police shot him dead not long after. 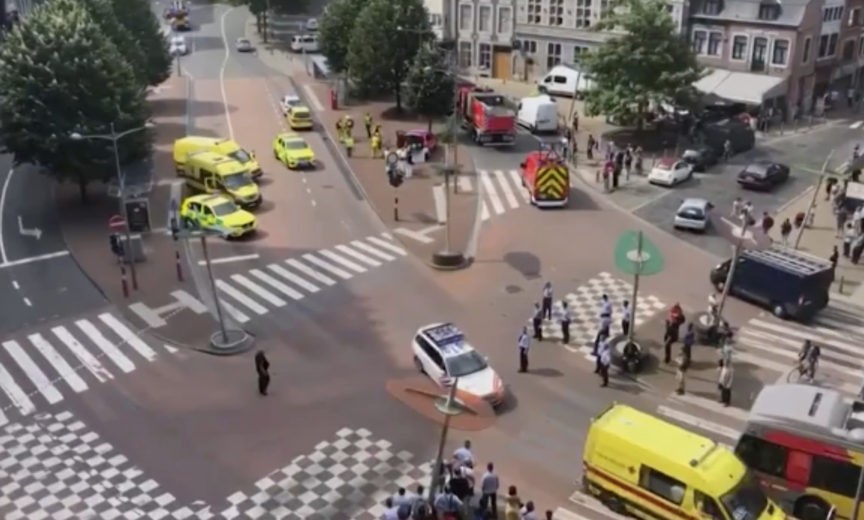 In this grab taking from video Tuesday, May 29, 2018,emergency services arrive at the scene after a shooting incident, in Liege, Belgium. A gunman killed three people, including two police officers, in the Belgian city of Liege on Tuesday, a city official said. Police later killed the attacker, and other officers were wounded in the shooting. (Victor Jay via AP)

Officials said Wednesday that the death toll from the attack outside a Liege cafe might have been higher if the bar owner and a cleaning lady had acted with less skill and courage.

Herman first stabbed the officers repeatedly from behind with a knife, stole their handguns and shot them as they lay on the ground.

The cafe owner quickly hustled patrons out of sight as the gunman went in and out of the establishment.

Herman then took a cleaning woman hostage at a nearby school. Imaankaf Darifa, the hostage, told The Associated Press she tried to keep him away from the children.

“I told him: ‘You are in a school here, you cannot come in a school, it is not right what you are doing,’” Darifa recalled.

She said Herman directed her to ask the police stationed outside the school to leave. When the officers refused to do so, the gunman threw out his identity card.

Then, Darifa said, “he walked out, and I left. Then there was the guns and they killed him.” 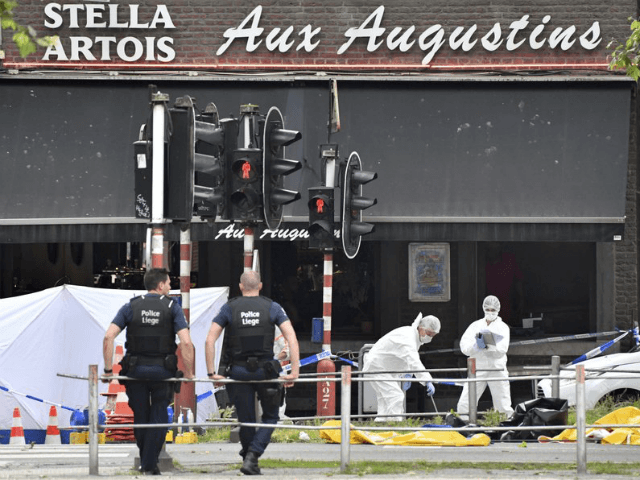 Forensic police, right, investigate at the scene of a shooting in Liege, Belgium, Tuesday, May 29, 2018. A gunman killed three people, including two police officers, in the Belgian city of Liege on Tuesday, a city official said. Police later killed the attacker, and other officers were wounded in the shooting.(AP Photo/Geert Vanden Wijngaert)

Prime Minister Charles Michel and King Philippe visited her in hospital, where she was being treated for shock.

The attack has shaken Belgium. The country’s police and members of the military have worked overtime to guard public buildings since coordinated suicide attacks on the Brussels airport and subway system killed 32 people and injured hundreds on March 22, 2016.

The police officers have been identified as Soraya Belkacemi, 44, and Lucile Garcia, 54. The passenger in the car was named as Cyril Vangriecken, 22, who was preparing to become a primary school teacher.

In Liege, Belkacemi’s mother, Bernadette Hennart, kissed a necklace and laid it over flowers placed at the scene, saying it was important for her and the victim’s brother to visit the place where her daughter spent her last moments alive.

Flags were flying at half-staff on public buildings around the city and people gathered to sign a book of condolences and lay flowers in memory of the victims.

“Every morning I am scared that something like this will happen, and every day it happens closer to home,” Melissa Lamny told The Associated Press after wrapping flowers around a lamppost at the scene of the killings.

Belgian federal magistrate Wenke Roggen said Wednesday that the crimes are being treated as “terrorist murder and attempted terrorist murder.” She said the assessment was based Herman’s actions, which she says mirrors the Islamic State group’s videotaped calls for supporters to attack police with knives and steal their weapons.

His shouts of “Allahu akbar” and contact with people considered radicalized also were factors, the magistrate said.

Prosecutors said Herman had several run-ins with police since he was a minor, including convictions for assault, drugs and insubordination. He left prison early Monday on furlough and should have returned Tuesday evening.

“He also committed a murder the night before,” Jambon, the interior minister, told broadcaster RTL. Jambon said the fourth victim was a former inmate who did prison time with Herman. Herman is alleged to have killed the man on Monday evening by hitting him over the head with a blunt object.

Jambon said Herman “wasn’t part of a network, he didn’t receive instructions from anyone else, so there is no need to raise the terror threat alert level,” which stands at 2 of a possible 4 in Belgium.

Mark Carlson and Sylvain Plazy in Brussels, and Bishr Eltouni in Liege, contributed to this report.