There has been an outcry in France over news that a controversial Muslim rapper behind the album Jihad, whose lyrics include a call to “behead secularists”, will be performing at the Bataclan theatre where Muslim radicals butchered 90 people at a concert in November 2015.

Since the dates for Médine Zaouiche to play two shows were announced Saturday, conservatives in France have been seeking to force the cancellation of the October planned performances, which have been branded “an insult” to Bataclan attack victims’ memory, according to local media.

More than 16,000 people so far have signed a petition against the planned performances, which represent “the height of indecency and submission” according to the Change.org website page.

Set up by patriotic French MPs, the petition points to Zaouiche’s “provocative” Jihad t-shirt, on which the outline of a sword forms the letter ‘J’, and argues it is “very difficult to accept” the rapper’s professed opposition to Islamist violence “in light of the ultra-reactionary and communitarian struggle he evokes in the majority of his lyrics”. 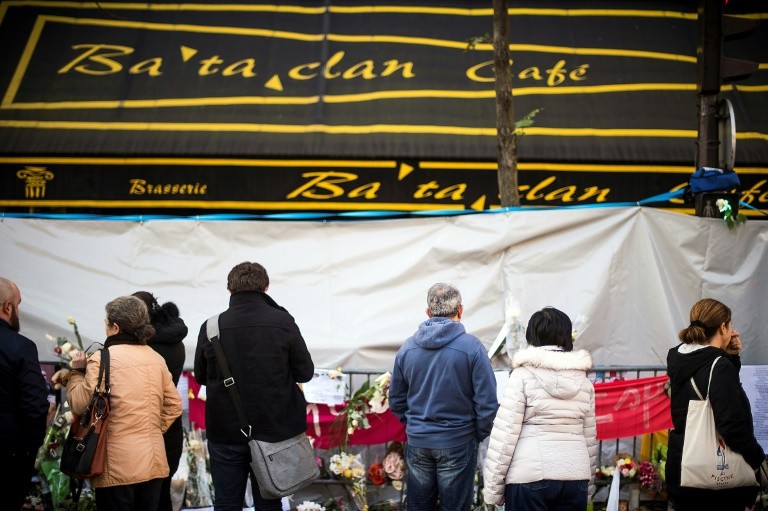 People pay tribute in front of the Bataclan after the November 13, 2015 attack © AFP/File LIONEL BONAVENTURE

Lawyers representing relatives of dozens of the families of people slaughtered in the Islamist attack, Bernard Benaïem and Caroline Wassermann, on Monday declared they would launch legal action in order to get the shows cancelled on the grounds they pose a strong risk of “disturbing the public order”.

As well as populist leader Marine Le Pen, who posted that “No French can accept that this guy is going to be pouring his filth at the very place of #Bataclan carnage”, numerous politicians from the centre-right Les Republicains took to social media to express anger at the upcoming shows.

Chairman of the conservative party, Laurent Wauquiez, opined on Twitter that plans for the rapper to perform at the venue represent “sacrilege for the victims”, and said they bring dishonour for France.

Criticism was not restricted to the right, with MP Aurore Bergé from France’s ruling En Marche party tweeting to denounce the shows as “an insult” to Bataclan victims, describing Zaouiche’s anti-secularist lyrics as “no more, no less than incitement to murder”.

In addition to railing against secularism and warning he would “put a fatwa on the heads of idiots”, a number of Zaouiche’s songs are filled with lyrics which are anti-French, declaring that third world mass migration to the “racist” and “apartheid” country is payback for its native population having “plundered” African resources.

As Breitbart London reported last week, authorities in France have banned the showing of World Cup 2018 matches on large screens in public places due to the ongoing threat of terror attacks, despite Western leaders’ insistence that Islamic extremism must not be allowed to “change our way of life”.

Figures released last summer revealed the number of radicals tracked by French intelligence officials had jumped 60 per cent in less than two years since the Bataclan attack, rising to 18,550 people on the nation’s Terrorist Prevention and Radicalisation Reporting File (FSPRT).