MILAN (AP) — Students across Italy demonstrated against the government’s education funding plans, in the first widespread show of dissidence against the new populist government.

Students demonstrated in 50 cities, including some 3,000 who ended their protest outside the Education Ministry in Rome. Hundreds gathered in the northern city of Turin, where protesters burned effigies of deputy premiers Matteo Salvini and Luigi Di Maio.

A student leader told Radio 24 that the education ministry had not accepted their request to meet.

“We reject the ‘savings’ campaign regarding schools,” said Giammarco Manfreda, a protest leader. “If the government isn’t afraid of change, show it by investing in education.”

Students were critical of a lack of funds for textbooks, transport and improvements to school buildings, many of which have not undergone serious upgrades in years due to spending cuts. Students also protested for the right of children of foreigners born in Italy to be granted automatic citizenship, and not wait until their 18th birthdays to apply, and against suggestions by Salvini to restart the draft.

Salvini reacted angrily to the protests, saying that burning effigies and hanging them on street lamps “is disgusting.” 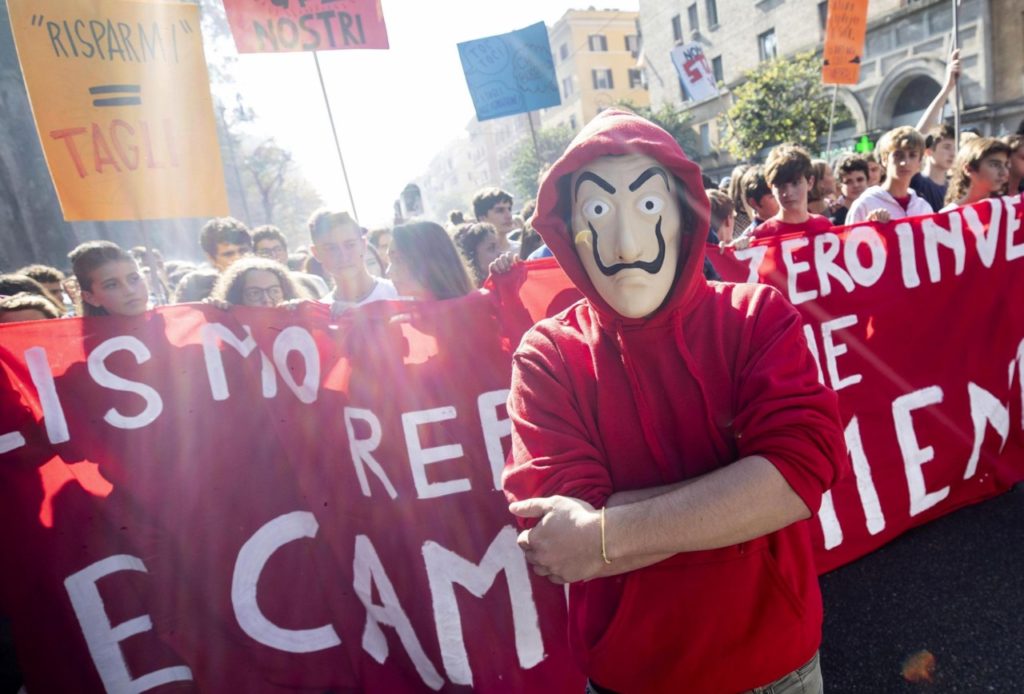 Students march during a protest in Rome, Friday, Oct.12, 2018. (Massimo Percossi/ANSA via AP)

“These ‘democratic’ students, coddled by social centers and by some professors, need many lessons in civic education,” Salvini said on Twitter.

Di Maio, who is economic development and labor minister, responded by saying that the ministry’s doors were open. “Let’s build a new school together,” he said.

The Italian parliament has approved the government’s spending plan, which includes money to roll back a pension reform, to offer a basic salary to some job-seekers and to lower taxes. All of these measures were top campaign promises.

The government calculates that the boost in spending will increase its deficit to 2.4 percent of GDP, which has worried investors and other countries that share the euro as a currency with Italy.

Italy’s economy minister has been attempting to reassure international partners, most recently meeting with the U.S. Treasury Secretary on the sidelines of an IMF-World Bank meeting in Bali.

The Economics Ministry said in a statement Friday that Giovanni Tria told his U.S. counterpart, Steven Mnuchin, during a meeting in Bali that the aim of the 2019 budget is “to reinforce growth in the Italian economy.”

The statement said Tria also “underlined the determination to follow a path to reduce the debt-to-GDP ratio, and he confirmed the intention to continue constructive dialogue with the EU commission and eurozone countries.”

Italy’s plan to boost spending has created concern that the eurozone’s third-largest economy won’t be able to bring down its high debt. Italy insists that the measures will boost economic growth, eventually bringing the deficit back down, but investors appear skeptical. They have pushed up Italy’s borrowing costs in bond markets, a sign of caution.

With the spending plan approved by Parliament, the government’s next move is to outline a draft budget to send to the EU headquarters by Monday. The EU Commission is expected to push back on the budget.