California’s world-famous theme park, which reopened after an unprecedented 13-month closure, is admitting only state residents and operating under a limited capacity for now.

Once inside, guests decked in Disney gear waved excitedly at employees tidying up the park’s hallmark Main Street, which was lined with hand sanitizing stations and signs reminding people to wear face coverings.

After spending the year mostly teaching her third-grade class from a tent in her backyard, Libby Birmingham was thrilled to be there. The 38-year-old, who attended the park regularly before the pandemic with an annual pass, took the day off work to make the trip down from Pasadena with friends.

“Disneyland is like my happiest place, to be totally honest,” she said. “It’s one of those places that I can always enjoy, and it lets me be the kid — not always be in charge of the kids.” 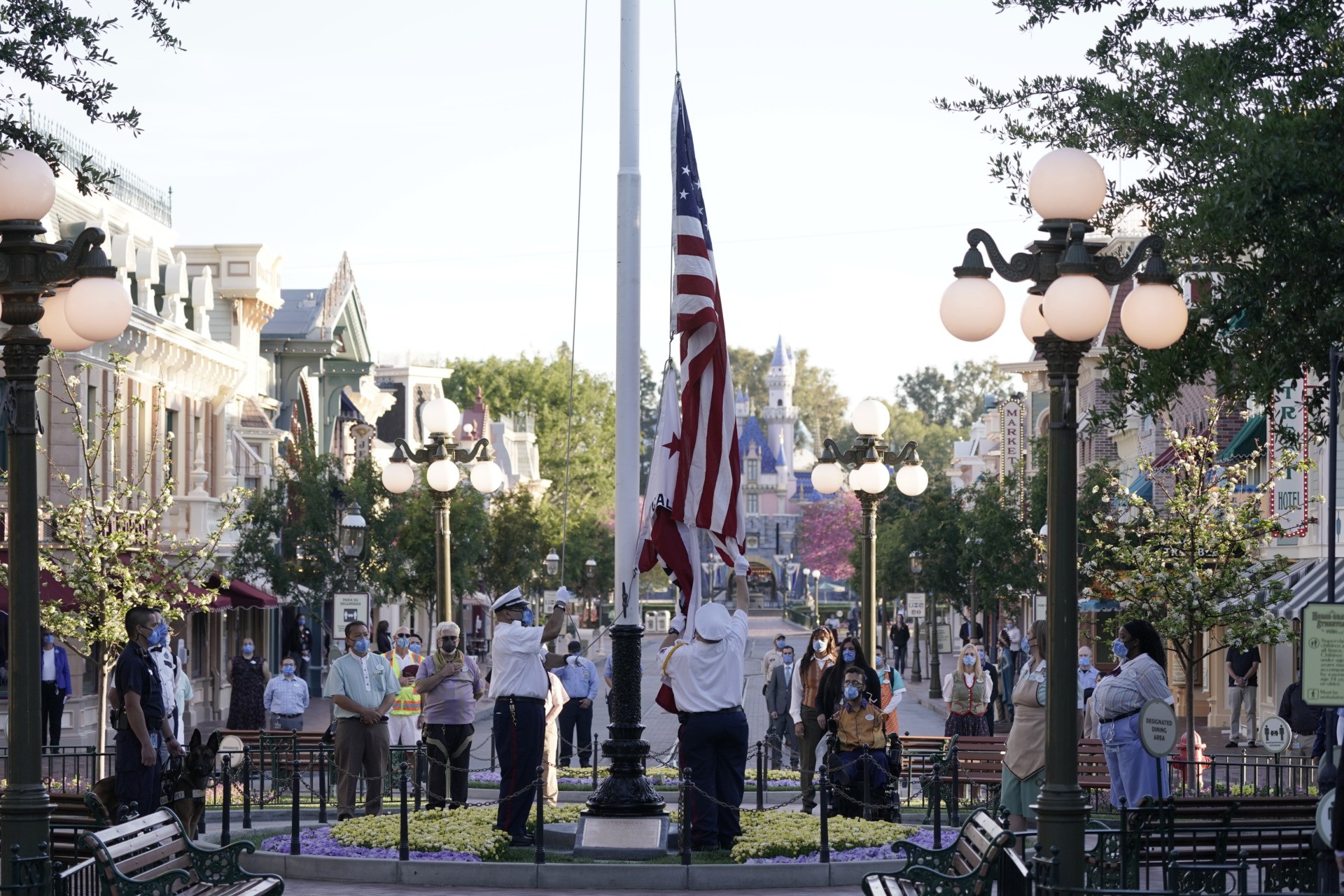 The flag is raised at Disneyland in Anaheim, California, Friday, April 30, 2021, as the iconic theme park opened for the first time since the pandemic lockdown. (AP Photo/Jae Hong) 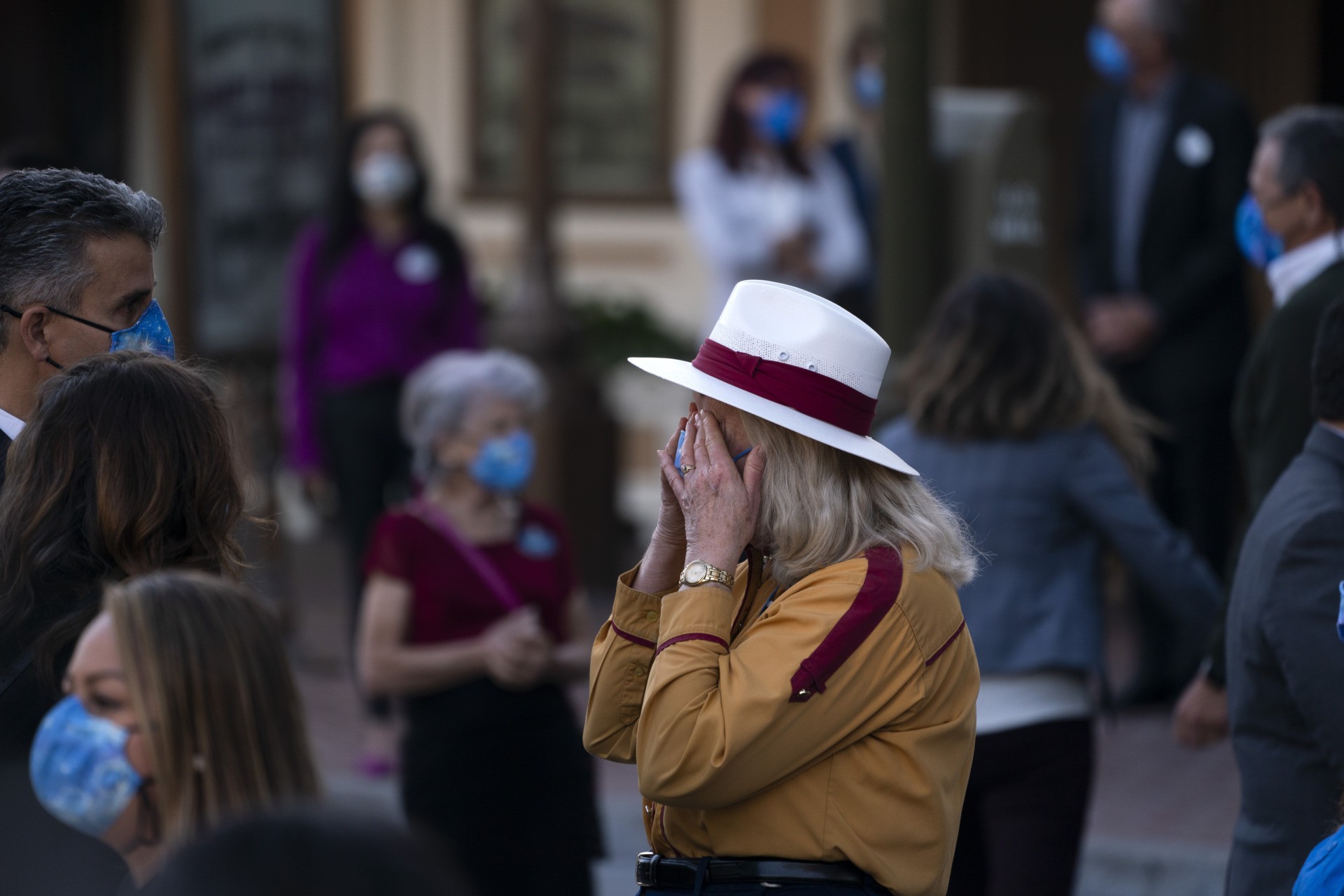 Employee Diane wipes her tears after the flag raising ceremony at Disneyland in Anaheim, California, Friday, April 30, 2021, as Disneyland reopened for the first time since the pandemic. (AP Photo/Jae C. Hong) 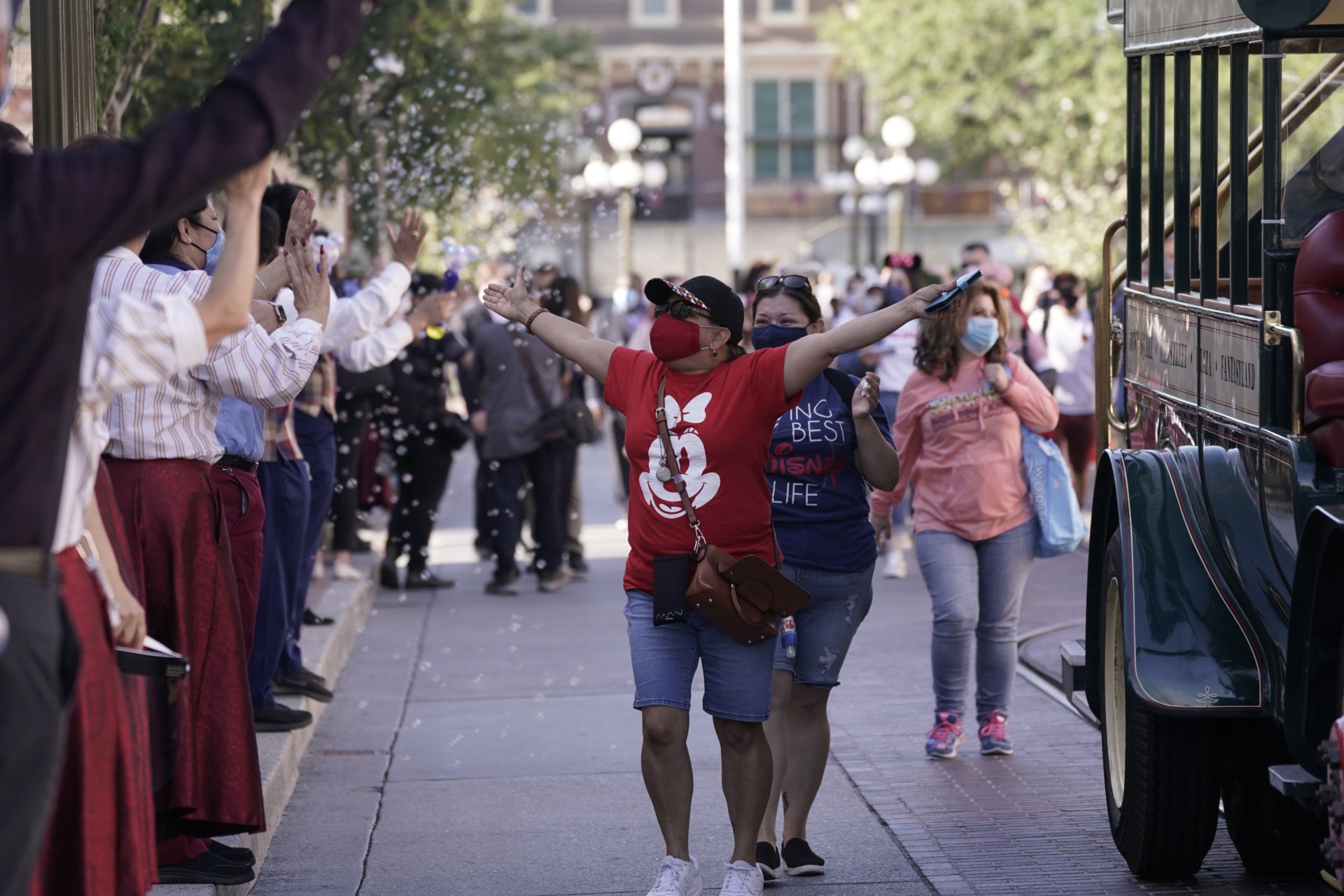 Guests walk down Main Street USA at Disneyland in Anaheim, California., Friday, April 30, 2021. The iconic theme park in Southern California that was closed under the state’s strict virus rules swung open its gates Friday and some visitors came in cheering and screaming with happiness. (AP Photo/Jae Hong) 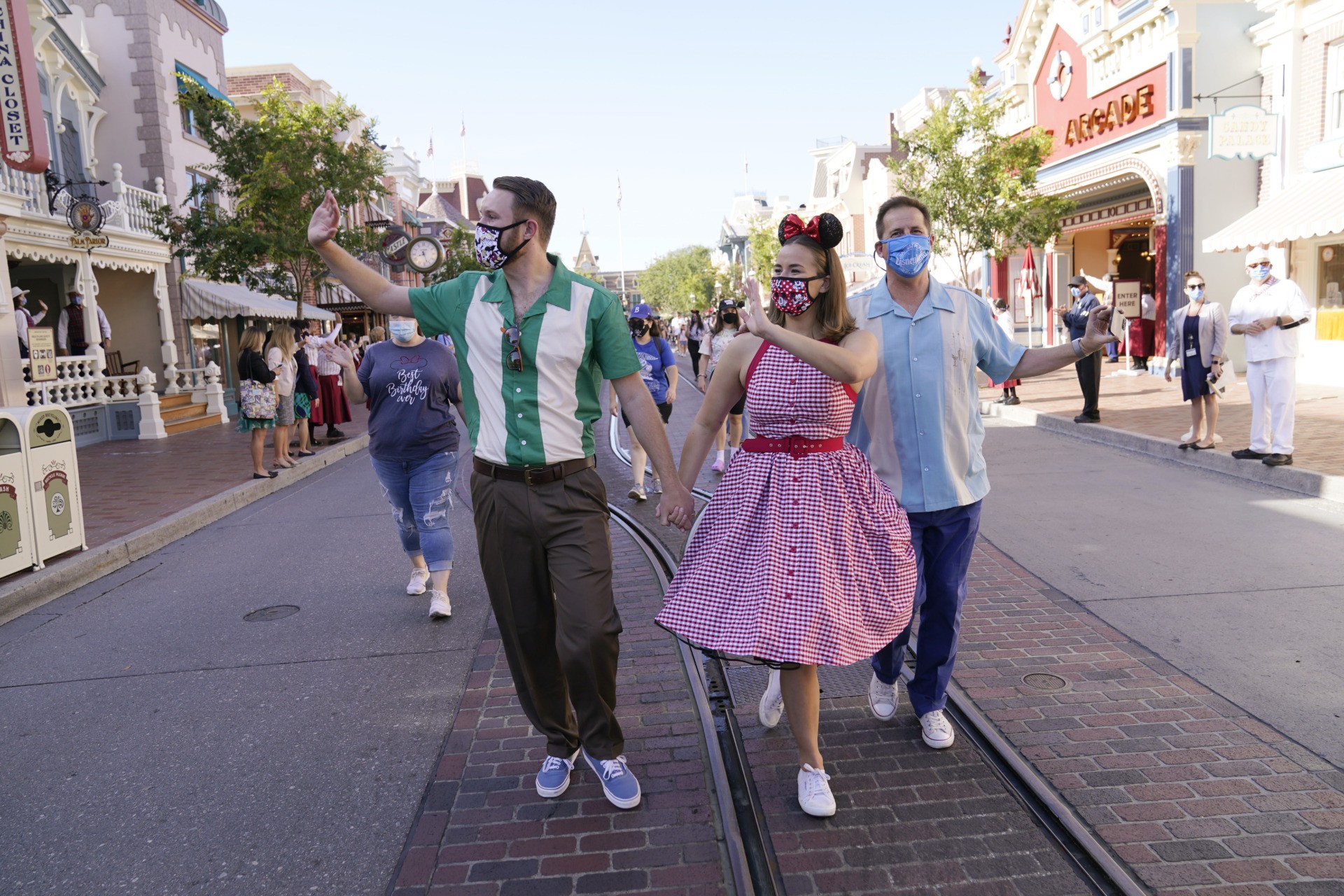 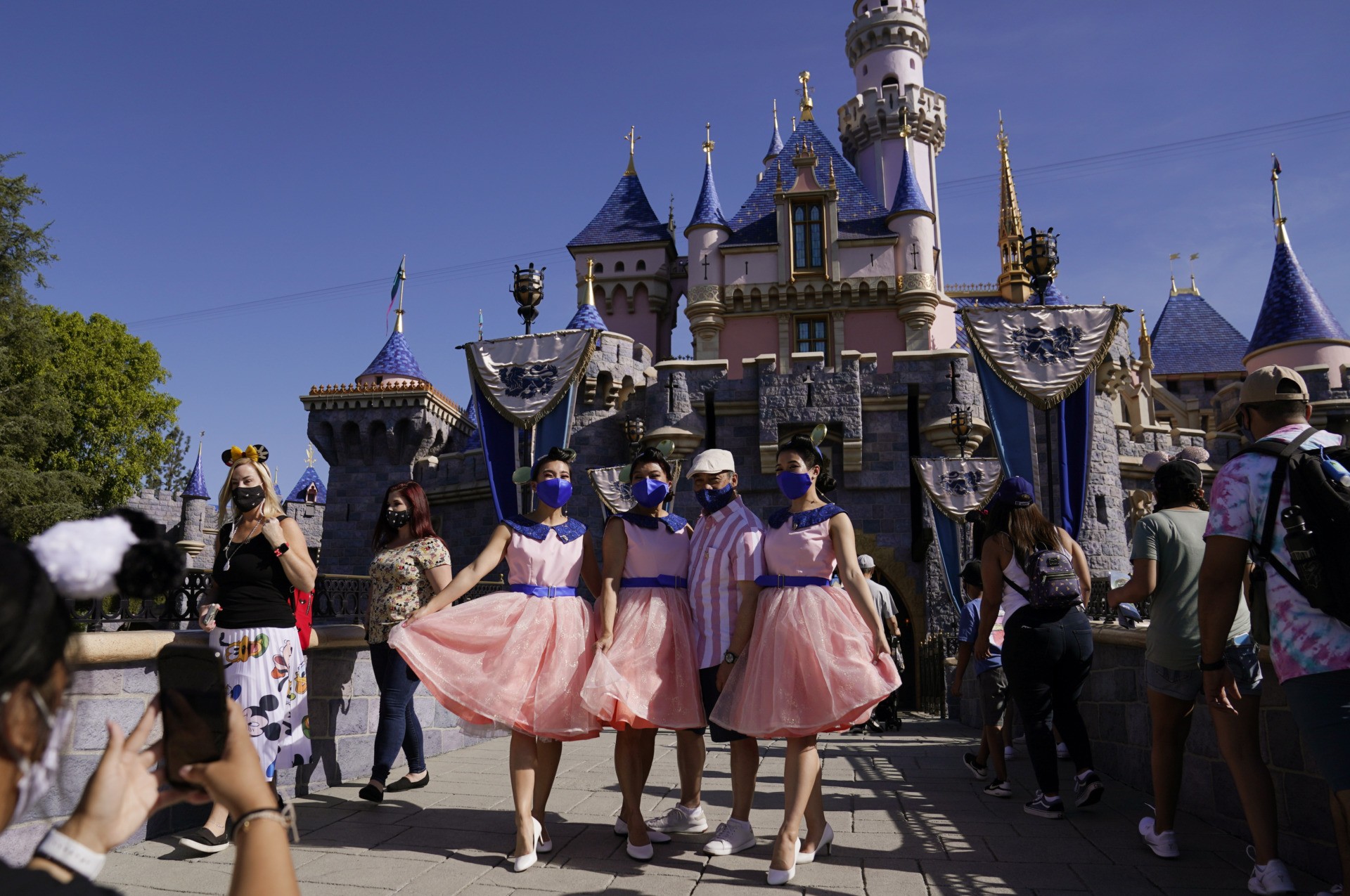 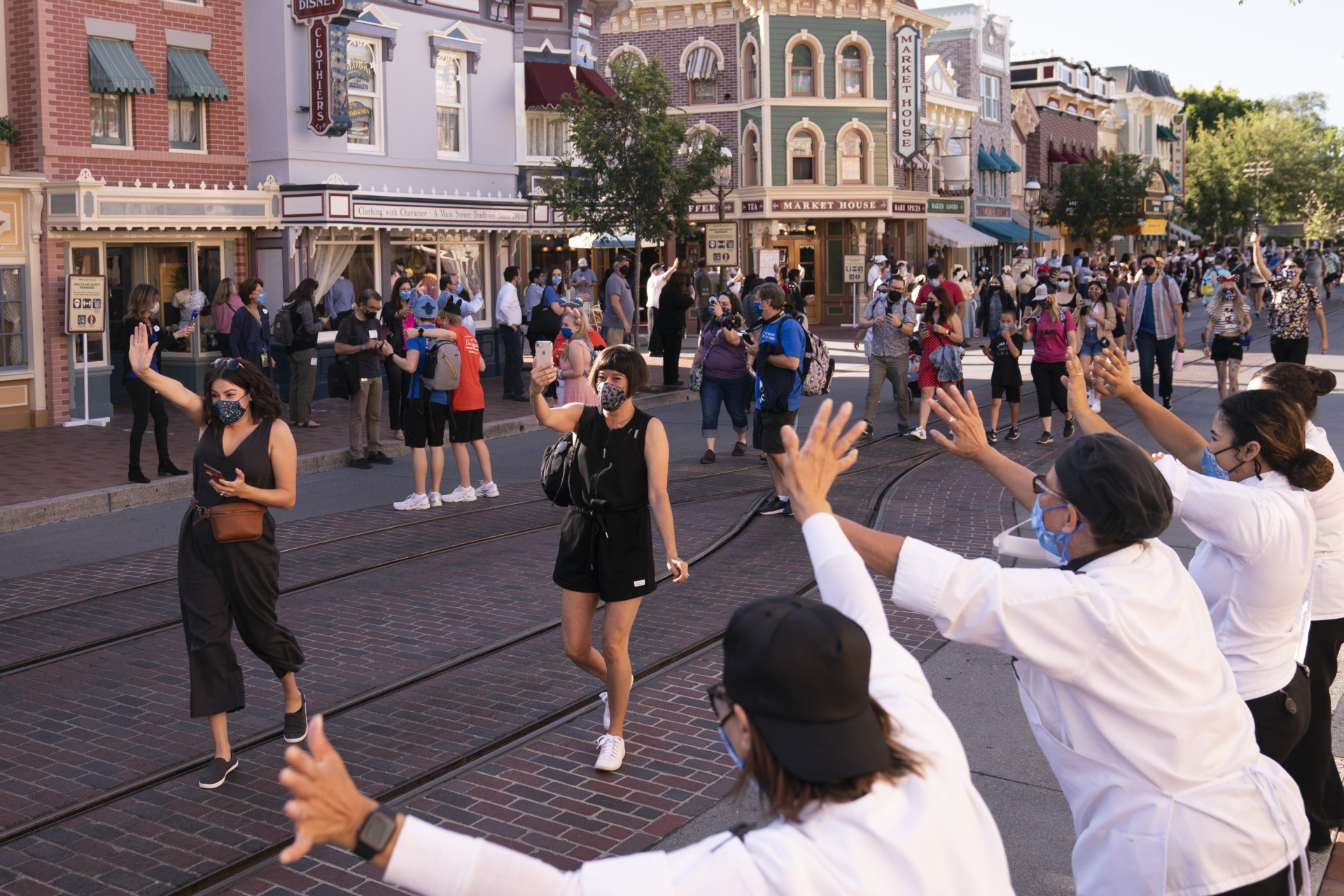 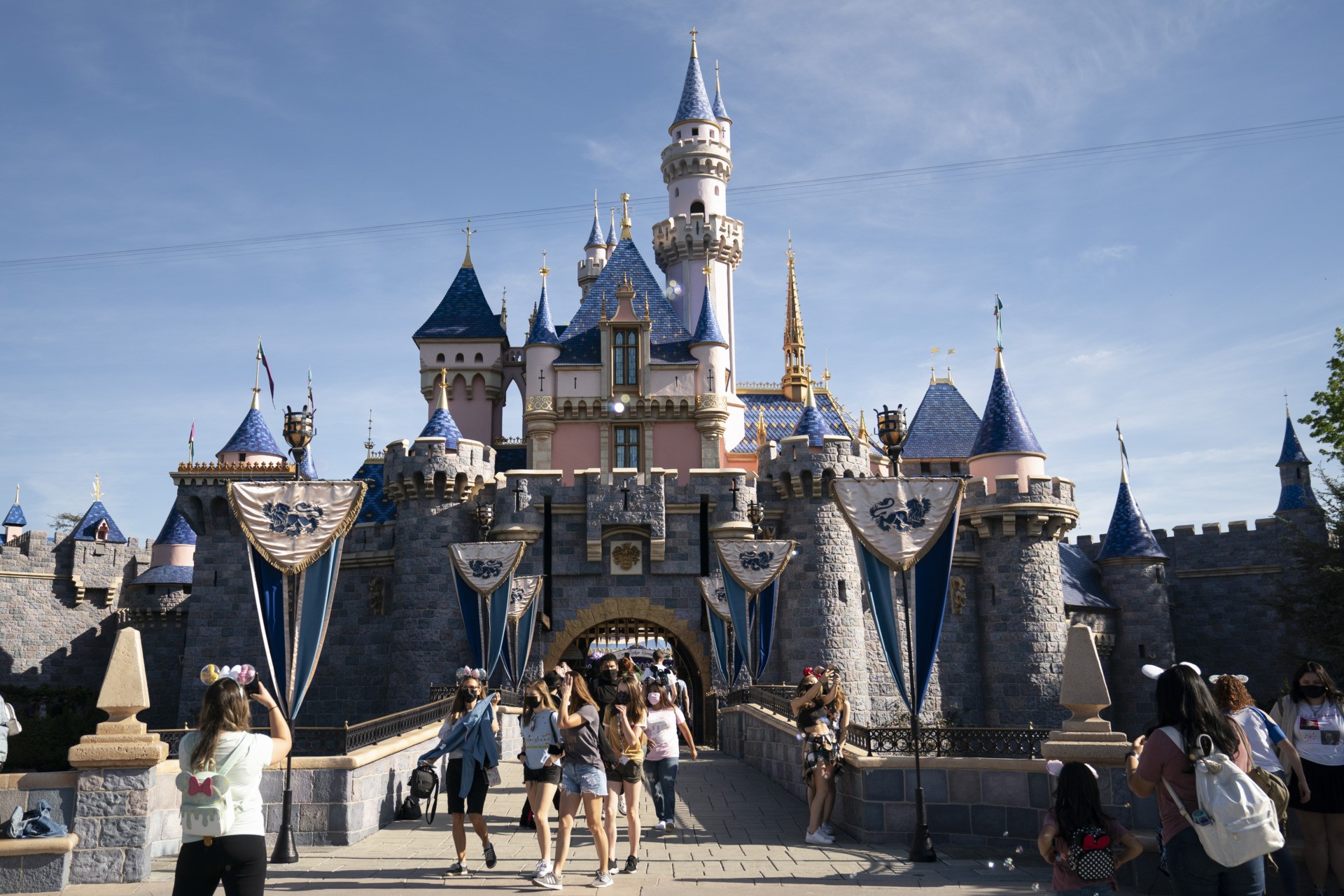 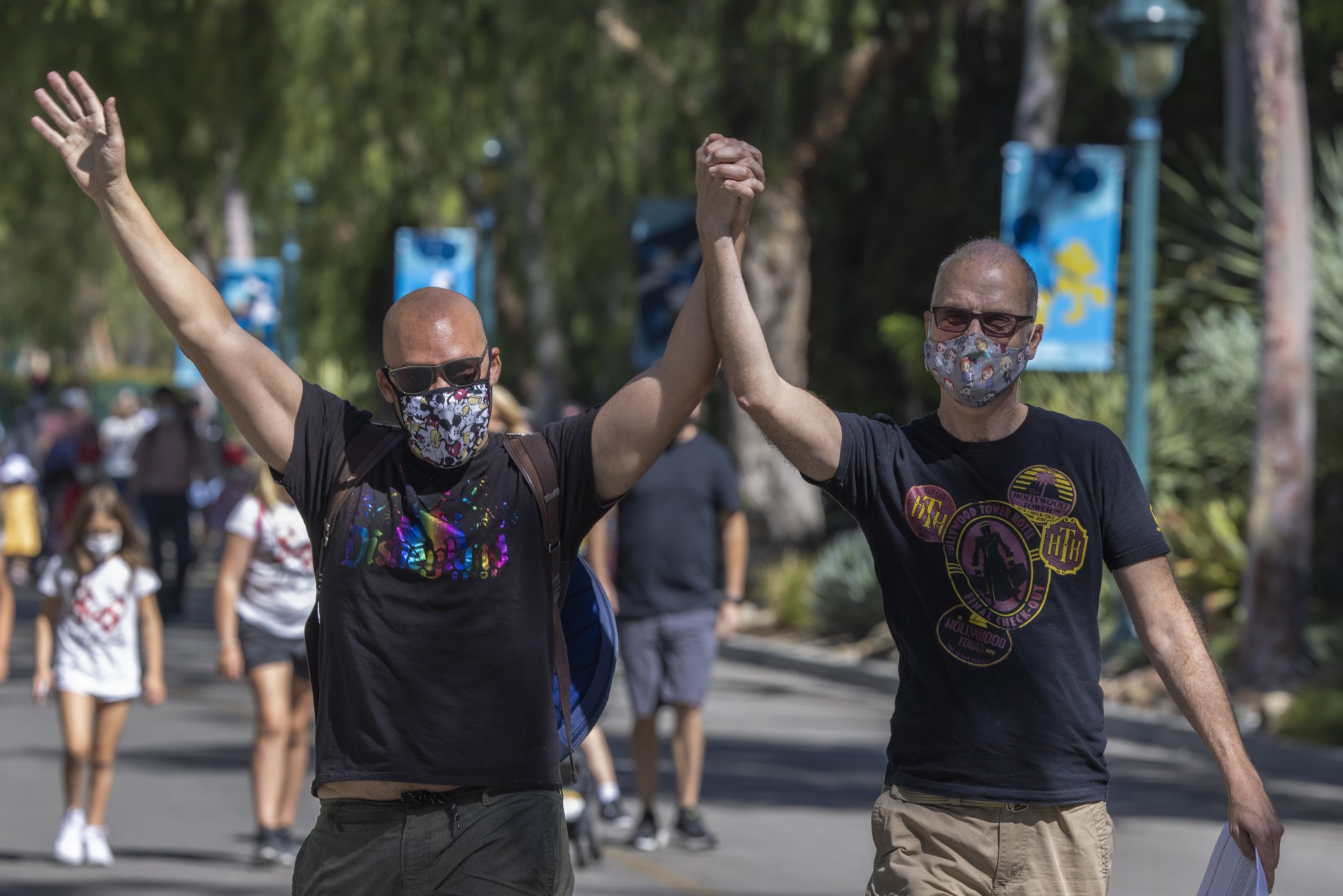 The reopening highlights a big shift for the nation’s most populous state from just months ago when COVID-19 cases were surging, hospitals were running out of ICU beds, and hundreds of people died from the virus each day.

Now, California boasts the country’s lowest rate of confirmed coronavirus infections and more than half of the population eligible for vaccination has received at least one dose. Children have been returning to in-person classes, shops and restaurants are expanding business, and Gov. Gavin Newsom set June 15 as a target date to further reopen the economy, albeit with some health-related restrictions.

“It has such a symbolic nature to really quantifying that we’re finally rolling out of COVID,” said Caroline Beteta, president and CEO of state tourism promoter Visit California.

Theme parks were among the last California businesses allowed to reopen, in contrast to states with fewer restrictions such as Florida, where Disney World’s Magic Kingdom resort has been up and running, though at lower-than-usual capacity, since July. Another major U.S. amusement park, Ohio’s Cedar Point, opened last summer and will do so again for the upcoming season — only this time, it won’t require masks on rides.

At Disneyland, visitors must wear masks and can remove them to eat only in designated areas. Hugs and handshakes with characters are off limits, and parades and fireworks shows have been shelved to limit crowding.

On Friday, an updated Snow White ride drew throngs of visitors who were methodically spaced out in a winding outdoor line to prevent congestion indoors. Other areas of the park had fewer people. In a section devoted to Star Wars, there was ample space for children to run freely, and visitors waved from a distance to Rey, who flashed a smile and waved from a platform overlooking the park.

Outside a popular boat ride, Allison Sanger and her 4-year-old daughter, Emily, stopped by a cordoned-off patio to chat with a parasol-twirling Mary Poppins and Bert. The 28-year-old said she was glad her daughter could get close enough to see the characters and snap photos even with the new rules.

“We honestly have so many memories here,” she said. “We missed our memories and our magic.”

There was even a marriage proposal.

Zach Bolger, 35, said he met his girlfriend, Mackenzie Brown, 26, some three years ago at Disneyland trading collectible pins. The couple returned to the park Friday, and Bolger pulled out a ring box near Snow White’s wishing well. Brown cried tears of joy. 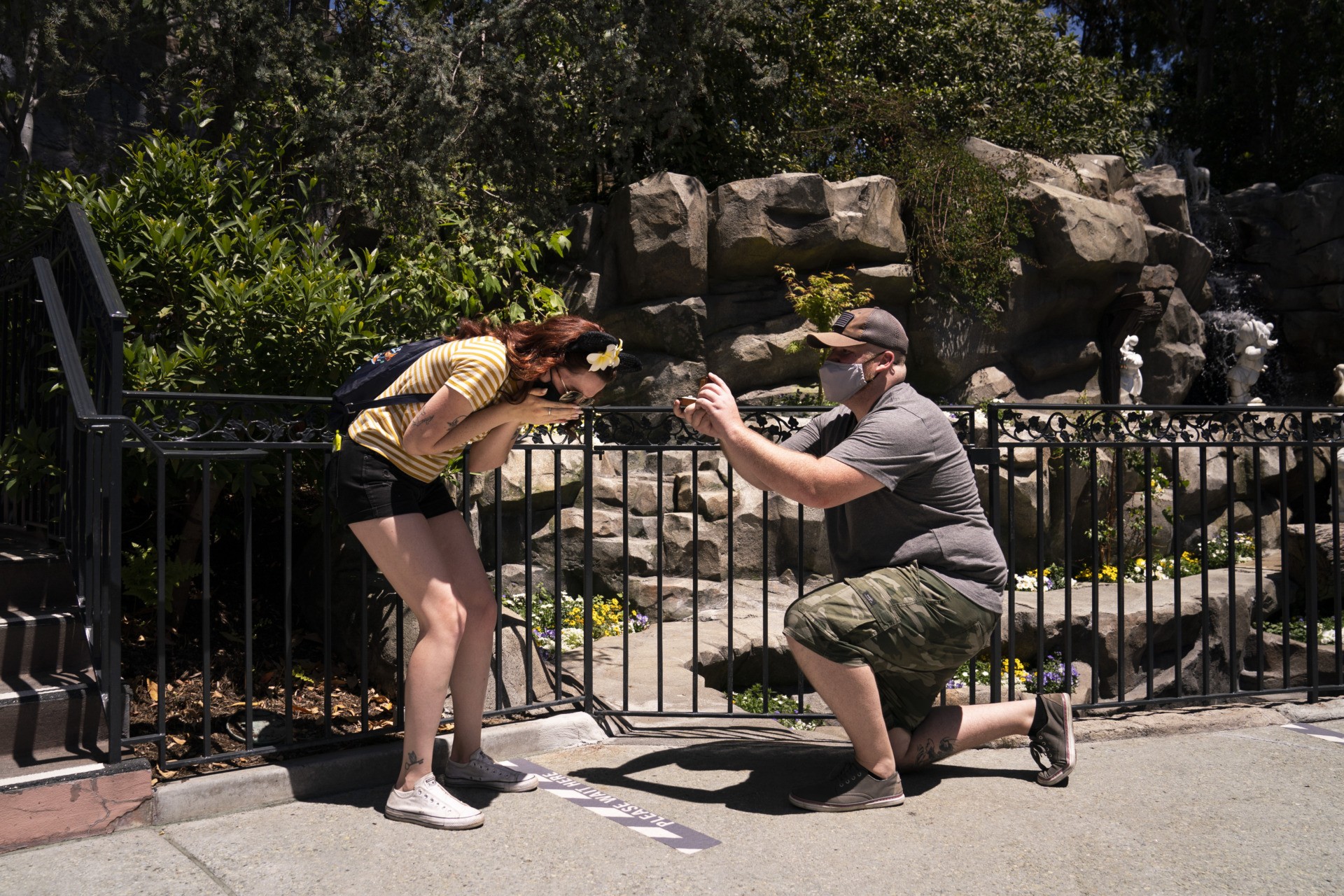 Mackenzie Brown, 26, left, covers her face in surprise and joy as boyfriend Zach Bolger, 35, kneels to propose to her at Disneyland on its first day of reopening in Anaheim, California, Friday, April 30, 2021. Bolger said he met his girlfriend some three years ago at Disneyland trading collectible pins. On Friday, the couple returned to the park and right near Snow White’s wishing well he paused, pulled out a ring box, and she started crying. (AP Photo/Jae C. Hong)

While California continues to “strongly discourage” anyone from visiting the state as tourists, the travel industry is banking on pent-up demand from its own nearly 40 million residents for a comeback. An advertising campaign encourages Californians to travel within the state, mirroring a pitch made after 9/11.

In a state with so many people shut in for so long, even in-state tourism could be a huge boost. Disney’s California parks have long had a loyal local fan base while its Florida locations rely more heavily on international tourists, said Carissa Baker, assistant professor of theme park and attraction management at University of Central Florida’s Rosen College of Hospitality Management.

Disneyland is a major economic engine in California, drawing nearly 19 million in attendance the year before the coronavirus struck, according to the Themed Entertainment Association. It and other such attractions were shuttered in March 2020 as Newsom imposed the nation’s first statewide shutdown order.

For now, the park and neighboring Disney California Adventure are restricted to operating at 25% capacity under state health rules. Disney is only taking reservations from state residents, though California also allows fully vaccinated out-of-state visitors to attend theme parks.

The reopening was also welcomed by park employees eager to get back to work and owners of hotels and shops in the surrounding city of Anaheim. The city’s convention center saw more than 300 cancellations since the pandemic and so far has rebooked a quarter of them, said Jay Burress, president of Visit Anaheim. 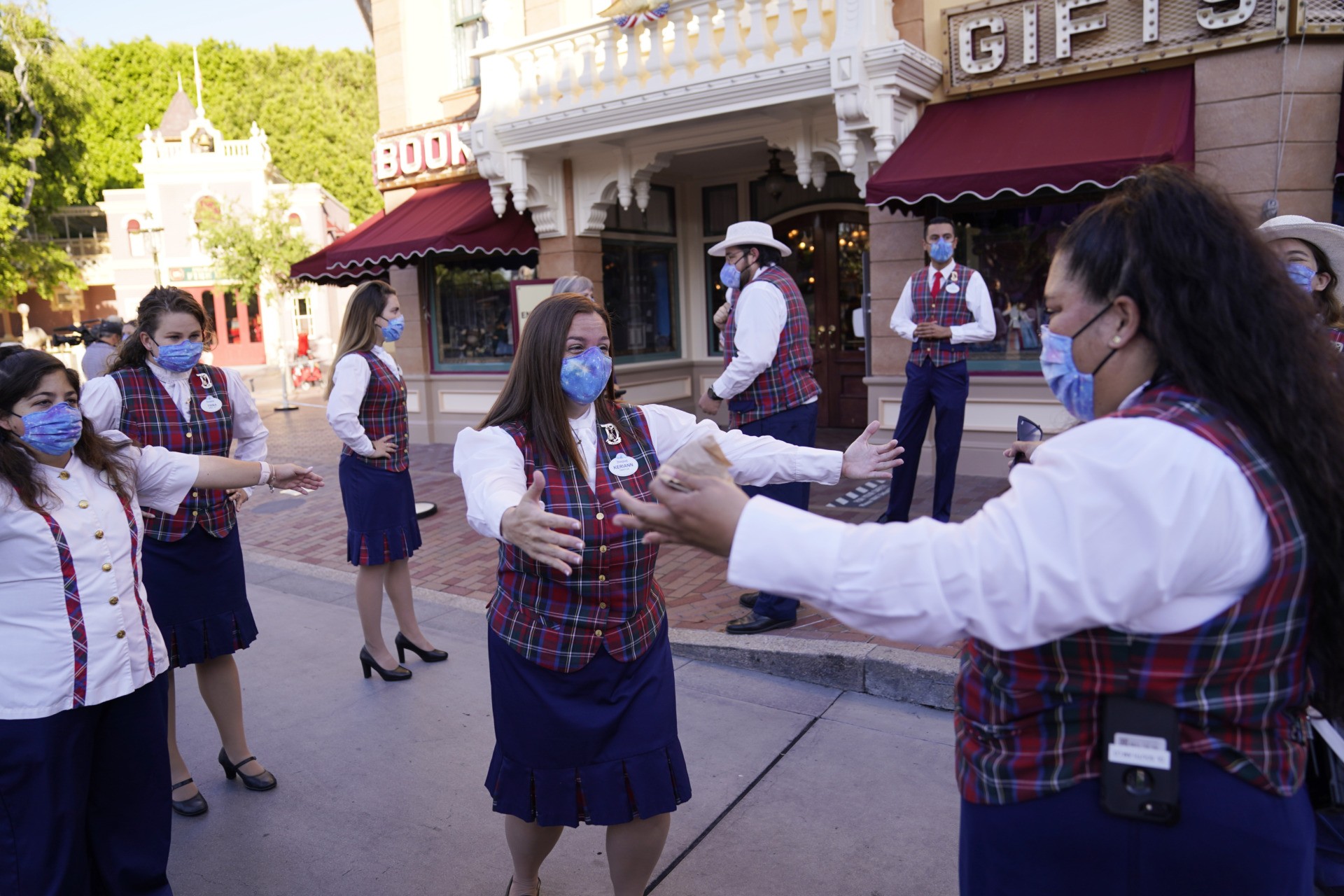 Employees air hug before the gates open at Disneyland in Anaheim, California, Friday, April 30, 2021, for the first time since the pandemic shutdown.(AP Photo/Jae Hong) 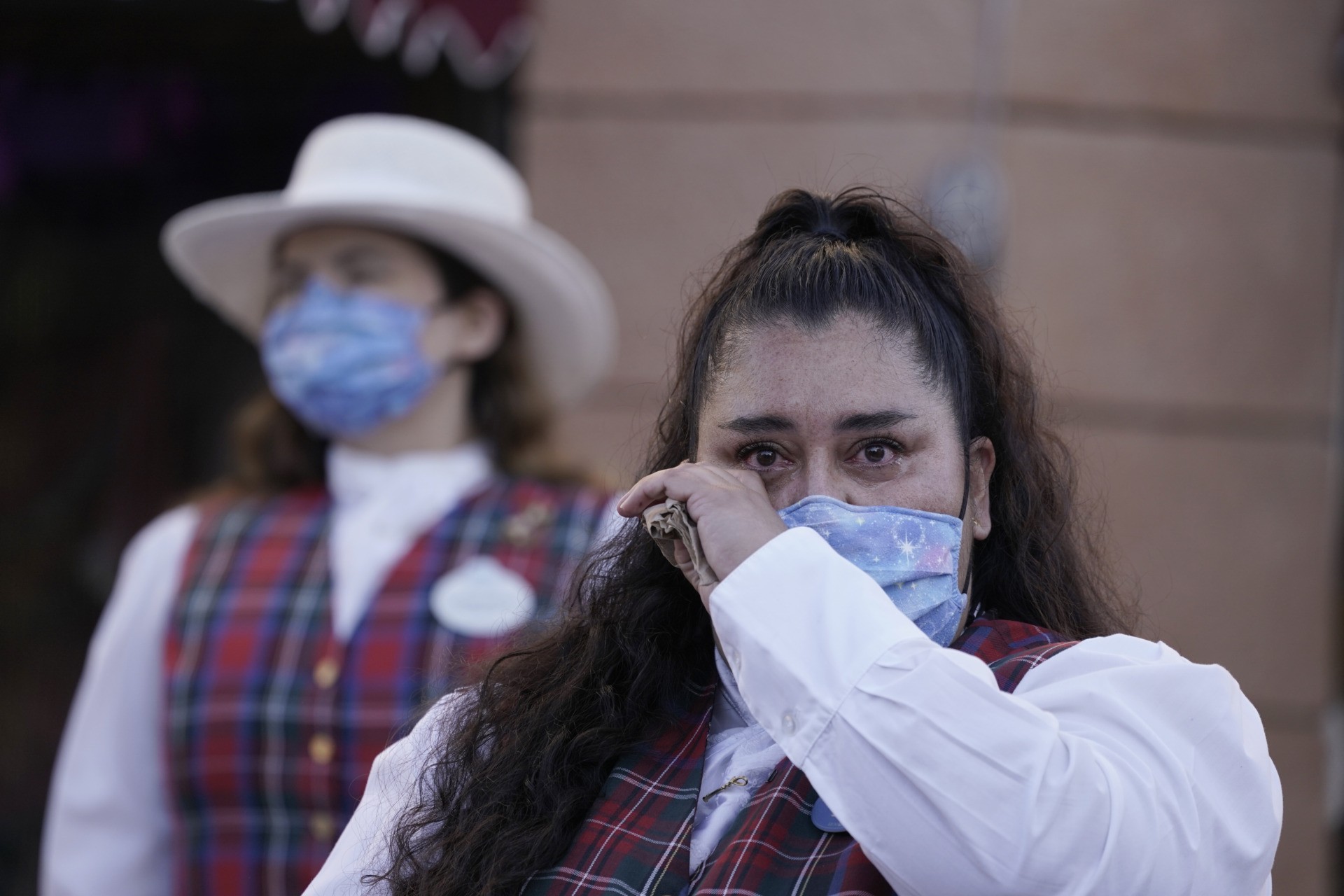 A Disneyland employee sheds a tear as they prepare to open the gates at Disneyland in Anaheim, Calif., Friday, April 30, 2021. (AP Photo/Jae Hong) 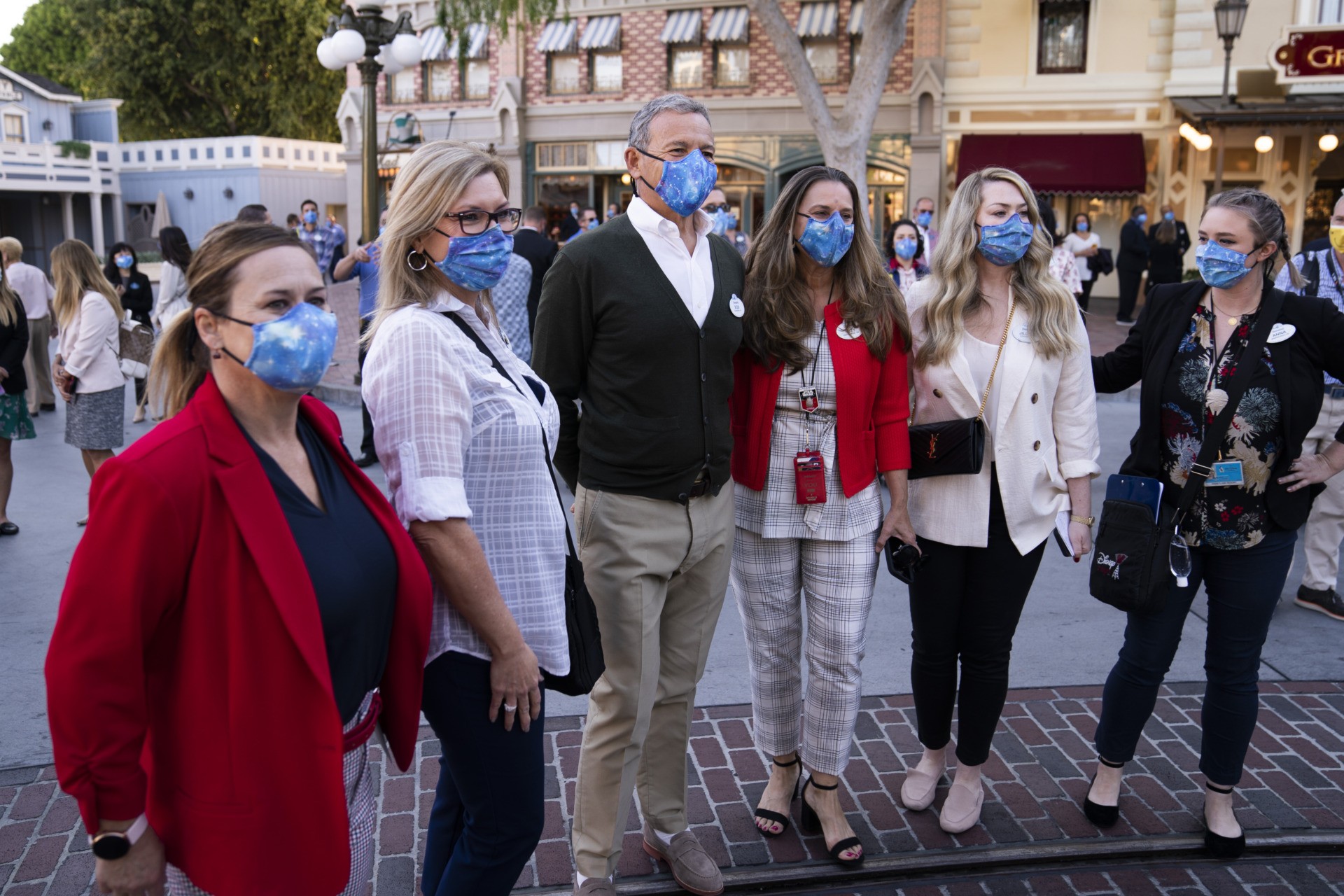 At an early morning flag ceremony, Disney chief executive Bob Chapek thanked the park’s employees, many who greeted each other with fist-bumps and bright-eyes, though their smiles were concealed by constellation face masks. He asked them to “bring the magic back” for visitors who were kept away during the 412-day closure.