Defence secretary Michael Fallon has indicated he will be deploying re-enforcements to the British islands in the South Atlantic in the face of continued sabre-rattling from rival claimant Argentina. 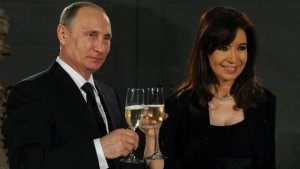 Details of the Falklands deployment are expected in the House of Commons this evening. Fallon has been on the airwaves this morning to flag the move, appearing on BBC Breakfast and the Today Programme. Although he did not raise it himself, Fallon didn’t deny the re-enforcements might have something to do with a proposed defence deal between aggressors Argentina and Russia.

Breitbart London reported last year on the oft-discussed but yet to be confirmed deal, in with the two nations could cooperate on matters of trade for mutual benefit. Russia is still learning to cope with the export bans placed on food by the European Union and Argentina has never militarily recovered after defeat at the hands of a British task-force in 1982. Taking advantage of Russia’s enormous surplus of military equipment, and Argentina’s bountiful supply of food, the two nations have discussed trading – beef and wheat for long range, all-weather fighter bombers.

Speaking on television this morning, Fallon said: “We have been reviewing our defence arrangements of the Falklands where there is obviously a continuing threat even 30 years after the Falklands war. I’m going to be announcing in parliament how we are going to beef up the defence of Falkland Islands – obviously I can’t go into details before I tell parliament.”

The announcement comes as the commons defence select committee delivers its damning verdict on the future of British defence, noting the dwindling expenditure on the military – which is due to drop below the bare-bones level of two percent of GDP after the election, and the changing global threat picture. Committee chairman Rory Stewart had led the calls, remarking that the world is now more dangerous than it has been at any time since the end of the Cold War, and that British soldiers lack the right training to fight a conventional war against an advanced nation – such as Russia, reports the Daily Mail.

Pointedly, the committee notes that while Russia is ready to deploy 150,000 men at 72 hours notice, it would take the whole of NATO six months to work up a force of that size.

After a decade of counter-insurgent warfare the British armed forces have lost many skills and capabilities core to fighting conventional warfare. The report said: “The UK must rebuild its conventional capacities eroded since the Cold War.

“This will involve demonstrating a conventional and nuclear capacity and determination to deter any further threats to the European order.”