India Muslims attacked and lynched by Hindus over cow slaughter 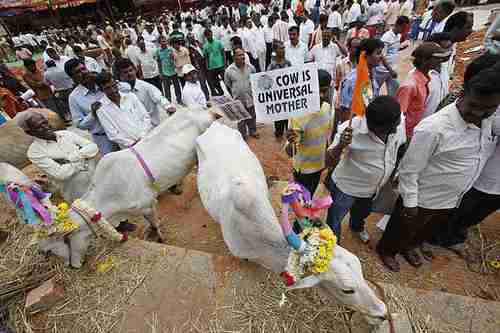 Two people were arrested on Saturday after Hindu demonstrators protesting cow slaughter set police jeeps on fire and damaged several other vehicles, following the allegation of a Muslim slaughtering a cow in the village of Mainpuri in the Indian state of Uttar Pradesh.

In another incident in Uttar Pradesh, a mob of 500 people armed with bamboo sticks and iron rods thrashed two Muslims suspected of slaughtering a cow and set fire to some dozen Muslim-owned shops, before police dispersed the mob using tear gas.

Two weeks ago, a Muslim in the nearby village of Dadri was lynched by a Hindu mob on allegations that he ate beef.

The cow is considered a sacred animal in the Hindu religion, and eating beef is forbidden. Not surprisingly, this means that cow slaughter is one more reason for conflict between Muslims and Hindus, and has been for centuries.

Cows are not slaughtered across the Islamic world, but the reason cows are slaughtered mostly in the Indian Subcontinent is because Indian Islamists introduced the practice of cow slaughter here as a challenge to the Hindu religious practice of worshiping cows.

Cow slaughter is illegal in many parts of India, and so Muslims eating beef can be subject to arrest, or the target of protests by Hindus.

Cow slaughter has also spread to Pakistan, for a similar reason, according to another analyst:

In the current areas [that constitute] Pakistan, cows were not sacrificed in large numbers [before Pakistan was created in 1947]. When the Mohajirs [Indian Muslim immigrants] came to Pakistan after the Partition, they also brought the tradition of cow slaughter along with them. It was under the impact of the immigrant Islamic organizations such as Jamaat-e-Islami and the people arriving from there [i.e. from the regions that remained a part of India]… that a tradition of sacrificing the cow became strong…

New Delhi Television and MEMRI and AFP and MEMRI

The rioting and lynching described above occurred in villages near New Delhi in India’s northern state of Uttar Pradesh (UP).

In 2015, the number of cases under the law prohibiting cow slaughter has doubled this year from 2011. Hindu activists have been campaigning against “illegal slaughter houses,” especially in western UP. “We have got illegal slaughter houses in eastern UP closed, but there are several functioning in the west. Beef is easily available in cities like Aligarh and Meerut. Our activists have already been told to keep an eye. Recently, they stopped a vehicle of animal traffickers in Ghaziabad.”

According to another Hindu activist:

We have a goal of getting cow slaughter banned and getting cow the status of national animal. Our followers paint slogans to make people aware of the atrocities on cow. One slogan is kati gai kare pukaar, bandh karo yeh atyachar (cows being slaughtered plead an end to this atrocity). Another is Modiji vaada nibhao, gau mata ki jaan bachao (Modiji [Indian prime minister Narendra Modi], fulfil your promise, save the life of mother cow).

There is renewed faith in our campaign, so a large number of people are getting attached. This is the first time that everyone is talking about it. […]

We are not in favour of using force [as happened in Dadri]. Those who eat meat have bad habits like infants who eat soil. We have to help them get rid of this habit with persuasion, not by beating them or beating ourselves.

Although cow slaughter is an issue in other parts of India, the issue in Uttar Pradesh may be serving as a proxy for anger against the government, in an Indian state that is desperately poor with a government that desperately corrupt.

As an example, the Uttar Pradesh government placed an advertisement for 368 jobs as peons — low-level jobs such as serving tea. A staggering 2.32 million applied for these 368 jobs, including 25,000 applicants that had Masters degrees. Indian Express and Hindustan Times

Those who, like me, have been into chess in the past are familiar with the name Garry Kasparov as a former world chess champion during the days of the Soviet Union. In recent years, Kasparov has become highly visible political opponent of Russia’s president Vladimir Putin. He appeared Paul Gigot’s Wall Street Journal report on Fox News, and gave his analysis of Putin’s strategy in Syria.

He said that Putin had expected east Ukraine to be an easy victory, but it turned out to be much harder than expected because there were too many Russians in Ukraine who sided with the Ukraine government:

Ukraine proved to be much tougher than he expected. He thought ethnic Russians in southeast Ukraine would embrace Russian gangs. … Most of them subscribe to Ukraine army and we saw in east Ukraine was more or less a civil war between pro-European Russians that made the majority between the army and Putin force. So too much for Putin to push forward.

Rather than continue with Ukraine, Putin saw a vacuum in Syria that Russia could fill:

[O]ne of the side effects of Putin’s attacks in Syria and his support for Bashar al Assad, of his regime, is a way for refugees. There are hundreds of thousands, now, potentially, millions of refugees fleeing into Europe… With more refugees there, you can see the ultra-right wing Nationalist parties gaining ground, and they are all allies of Vladimir Putin and eventually, when in March of 2016, the E.U. has to decide on sort of sanctions, whether to prolong them or to leave them, Putin expects the allies in Europe will help him to get rid of sanctions.

So, Putin hopes to use the millions of refugees to blackmail Europe into lifting sanctions. But there’s a second objective in Syria as well:

But also there’s still hopes that Russian presence there and combine assault with Russian, Iranians, Assad forces could create sort of a major war in the Middle East. Because for Putin to influence oil prices which are vital for [Russia’s economy]… He must put oil prices up because with $50 a barrel, maybe for two years, but Russian economy will go [down]. […]

Dictators, strong, successful dictators, they do not play games. It’s all about survival. Putin thinks one or maximum two moves ahead. ‘I have to survive today. I have to win this battle. We’ll see what happens the next day.’

That’s why he needs instability because in the situation in which instable, without rules, so he always dominated the game because he doesn’t have to go to Congress, the parliament, he doesn’t care about public opinions. He has an advantage of moving swiftly.

I have written several times that Putin’s actions in Syria are insane because they’re going to trigger a war. According to Kasparov, Putin actually wants to trigger “some sort of major war in the Mideast,” in order to cause oil prices to rise, saving Russia’s economy.

To summarize, Putin’s actions in Syria have two objectives, according to Kasparov: Create millions more Syria refugees in order to weaken Europe; and trigger a major war to raise oil prices.

Putin undoubtedly believes that any war that Russia triggers can be contained, just as previous Mideast wars have been contained. From the point of view of Generational Dynamics, what Putin does not understand is that as the world goes deeper into a generational Crisis era, as the few remaining survivors of World War II die off, as the horrors of WW II are no longer remembered, the chances of “containing” a new Mideast war become smaller and smaller. The next Mideast war could finally be the one that is not “contained.”

Kasparov concluded that Putin may not stop with Syria. Putin perceives Obama as being very weak, and knows that the next administration could be very different, so he’ll “try to gain maximum ground as long as Obama is in office.”

Putin’s next move could be in another direction:

I would watch another destination. Look at Putin’s preferences, oil, deep water ports, chaos, instability, Benghazi. … The way Putin thinks, I think Benghazi [Libya] is probably one of the spots on the map that is just bringing his attention.

Once again, there would be two objectives in intervening in Libya: Take control of Libya’s oil exports, and generate another flow of refugees into Europe. Fox News