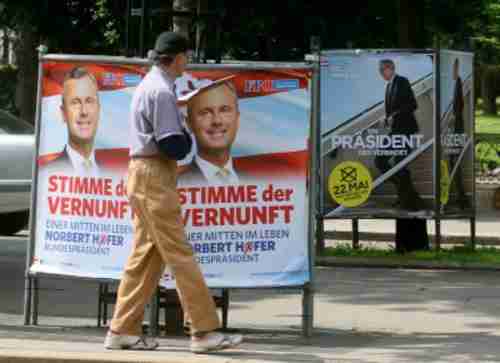 As of this writing on Sunday evening, Austria’s electorate is deeply polarized between two candidates who split the vote almost evenly in an election on Sunday. The postal votes will be counted on Monday, to decide the actual winner.

The two candidates are Norbert Hofer of the far-right Freedom Party versus Alexander Van der Bellen of the left-liberal Green Party. Both are considered to be fringe parties. What’s perhaps most remarkable is that the two main centrist parties, the center-right Austrian People’s Party (ÖVP) and the center-left Social Democratic Party of Austria (SPÖ) have both been shut out, for the first time since 1945, the end of World War II. This rejection of established politicians is similar to what has been happening in American politics.

There were 4.48 million people voting directly on Sunday, giving right-wing candidate Norbert Hofer has 51.9% of the vote, and left-wing candidate Alexander Van der Bellen has 48.1% of the vote. However, there are 700,000 absentee ballots, or 13.5% of the total ballots, and so it’s quite possible that the postal votes will change the result quite significantly, giving the victory to either candidate.

Austria’s politics have been strongly affected by the migrant crisis. About 90,000 people claimed asylum in Austria last year, equivalent to about 1% of the Austrian population, and the Freedom Party ran an anti-immigration campaign. Last year, Austria followed Hungary in closing the border to migrants passing through from Greece to Germany. Then last month, Austria’s parliament voted to close border with Italy to slow refugees.

A victory by Hofer would give momentum to anti-migrant and eurosceptic parties in other EU countries. Moves to the right have already occurred in several countries, including France, Germany, Hungary and Denmark. BBC and The Local (Austria) and Reuters

I’ve been writing about the worldwide increase in nationalism and xenophobia for years. This is a feature of every generational Crisis era, and we’re seeing a repeat of many things that happened in the 1930s.

In 2008 in South Africa, tens of thousands of immigrants were forced to flee for their lives from their homes and businesses, often with no time to collect their belongings before their homes and businesses are looted and destroyed. The xenophobic violence and looting were generally perpetrated by young South Africans from the Zulu and Xhosa tribes. At first, refugees from Zimbabwe were particularly targeted, but later any foreigner was targeted, forcing the government to set up refugee centers housing some 70,000 refugees. ( “South Africa will create ‘temporary shelters’ for migrants, not ‘refugee camps'”)

I’ve written many times about anti-immigrant, anti-Roma, and anti-Muslim xenophobia in Europe. For example, in 2009 I wrote about xenophobia in Switzerland ( “Switzerland shocks itself by passing a ban on minarets.”). Other examples include mutual xenophobia between China and its neighbors, Japan, Philippines, and Vietnam.

So what we’re seeing today is not something that’s suddenly sprung up. It’s part of a growing trend that’s slowly but surely been gathering power since the generational Crisis era began around 2003.

There’s another side to this, however, that we haven’t really yet seen yet, but certainly will — something corresponding to the 1930s rise of the radical left — Socialism and Communism — as a countervailing force to the rise of the radical right. Early signs of this are already evident in America in the candidacies of Donald Trump and Bernie Sanders.

It’s worth recalling something Donald Trump has said. He’s said repeatedly some variation of the following: “My wife has told me to act more presidential. If I did that, then there would be only ten people in this audience instead of 2000. So I’m not going to become presidential until I have to be.” The clear implication is that Trump is like any other politician, just telling his supporters what they want to hear.

As I’ve written many, many times, it’s a core principle of generational theory that, even in a dictatorship, major decisions are made by masses of people, by generations of people. The attitudes of politicians are irrelevant, except insofar as they represent the attitudes of the people. The Holocaust and World War II would have occurred with or without Adolf Hitler.

So we’ve been seeing the same phenomena in both America and Austria: Complete rejection of established politicians by young Millennials, and deep polarization as large segments of the population move to the far left, while other segments move to far right. This is what happened in the 1930s, leading to World War II. And it’s what’s happening today, and will lead to the approaching Clash of Civilizations World War that I’ve been writing about for years. The Local (Austria) and Guardian (London) and Washington Post