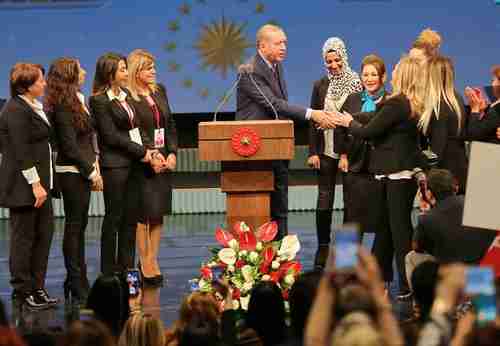 For the first time in the history of the republic, we are changing our ruling system through civil politics…

There are those who are belittling the result. They shouldn’t try, it will be in vain. It’s too late now.

Erdogan’s remarks reflect how deeply split the country is. Those who support Erdogan often consider him to be close to a god, or at least the savior of Turkey, following last year’s coup attempt, much like Mustafa Kemal Ataturk, who founded modern Turkey in 1924, following the collapse of the Ottoman Empire.

However, Erdogan’s opponents say they are deeply worried that, far from being a savior of Turkey, Erdogan is turning the country into a dictatorship. They refer to the failed coup attempt on July 15 of last year as a “gift” to Erdogan, because it permitted him to institute a devastating purge of over 100,000 of his political opponents, who were arrested or fired with virtually no evidence. Erdogan declared a state of emergency and then used the emergency powers under the declaration to conduct a sweeping purge of the military, judiciary, and civil service.

Erdogan’s supporters claim that the purges were necessary following the coup attempt, but opponents point out that Erdogan had already begun the first purges before the coup attempt.

The most dramatic example occurred on March 5 of last year, months before the coup attempt, when Erdogan ordered a government takeover of the only major opposition media publishers in Turkey, the Zaman media group, publishers of Turkey’s most popular newspaper, Today’s Zaman. On that day, Turkish police forcibly entered the Zaman building, firing tear gas and rubber bullets to disperse protesters who had gathered outside, and forcibly took over the publisher, as we reported at the time.

After the coup attempt, Erdogan arrested and jailed hundreds of additional reporters, creating an atmosphere where any reporter that opposes Erdogan can be immediately accused of treason and jailed.

And yet, despite those and other overwhelming advantages, Erdogan was only able to win by one of the slimmest of margins. Furthermore, opponents point to examples of voter fraud and say that they’ll demand an investigation, but their demands are not likely to be heeded.

The referendum makes historic changes to Turkey’s government. Turkey’s parliament will be largely sidelined. The prime minister and Cabinet will be abolished, and ministers will be directly appointed by the president and accountable to him. The president also will set the budget. The president will have the power to dissolve parliament and declare a state of emergency, and will have enhanced powers to appoint judges to the high court and constitutional court. Opponents claim that once these powers become effective in 2019, Erdogan will be able to use these powers to gain even more power, to the point of becoming a total dictator. Hurriyet (Ankara) and VOA and AP

Turkey’s referendum results will be closely scrutinized by Europe

Following the referendum results on Sunday, politicians in the European Union expressed dismay. One said, “Strange to see democracy restrict democracy,” referring to the view that Turkey will be a far less democratic country than it used to be, replacing the democracy with an autocracy.

Organization for Security and Co-operation in Europe (OSCE) was responsible for observing the election and will issue a report soon on possible election irregularities. Until then, many EU politicians are withholding comment.

A statement issued by the European Commission warned that since Turkey is a member of the Council of Europe, Turkey’s implementation of the referendum must meet the standards of the European Union:

We take note of the reported results of the referendum in Turkey on the amendments to the Constitution, adopted by the Turkish Grand National Assembly on 21 January 2017.

We are awaiting the assessment of the OSCE/ODIHR International Observation Mission, also with regard to alleged irregularities.

The constitutional amendments, and especially their practical implementation, will be assessed in light of Turkey’s obligations as a European Union candidate country and as a member of the Council of Europe.

We encourage Turkey to address the Council of Europe’s concerns and recommendations, including with regards to the State of Emergency. In view of the close referendum result and the far-reaching implications of the constitutional amendments, we also call on the Turkish authorities to seek the broadest possible national consensus in their implementation.

Officially, Turkey is still a candidate for becoming a member nation of the European Union. However, relations between Turkey and the EU have been increasingly hostile, and few people still believe that Turkey has any chance of becoming an EU member in the near or intermediate future.

In his victory speech on Sunday, Erdogan told his cheering supporters that he would like to reinstate the death penalty. The death penalty in Turkey was ended in 2003 as part of the process to get approval for membership in the EU. Reinstituting the death penalty would end Turkey’s bid for EU membership once and for all, but Erdogan presumably believes that it doesn’t make any difference.

Another issue hanging in the balance is the refugee deal signed early last year by the EU and Turkey. Under the deal, Turkey agreed with the EU to take back all migrants and refugees who cross to Greece illegally. In return, Turkey would receive financial aid, visa-free travel for all Turkish citizens in Europe’s Schengen Zone, and an acceleration of negotiations for Turkey to join the EU.

The deal has been successful in that the number of refugees crossing the Aegean Sea to enter Greece and the EU has been reduced from thousands a day to dozens a day. However, visa-free travel has never been implemented as promised, and negotiations for Turkey to join the EU have almost completely ended.

If the Council of Europe recommends any sort of sanctions on Turkey because of the implementation of the referendum, the Turkey may follow through on its repeated threat to rescind the EU-Turkey deal, and allow the free flow of refugees across the Aegean Sea.

However, some analysts have said that the deal is no longer even necessary because all the routes through Central and Eastern Europe are now being blocked by fences and barbed wire, so refugees know that if they cross the Aegean, then they won’t get any farther than Greece. Statement by European Commission and New Europe and Middle East Eye and National Interest