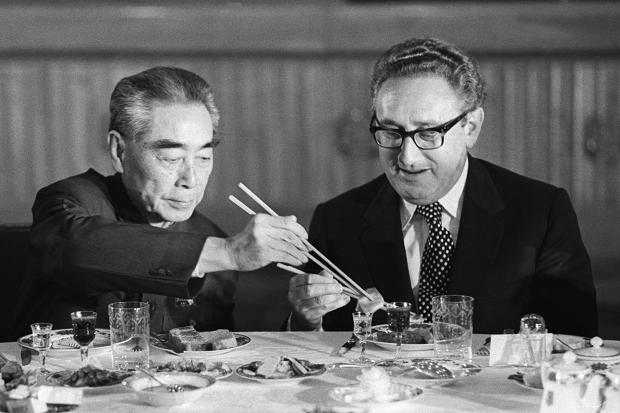 According to an interview in Bloomberg Businessweek, Steve Bannon and Henry Kissinger have had several meetings and are preparing a project to sound the alarm about what Bannon views as the primary economic threat to America:

If we don’t get our situation sorted with China, we’ll be destroyed economically. The forced technology transfer of American innovation to China is the single biggest economic and business issue of our time. Until we sort that out, they will continue to appropriate our innovation to their own system and leave us as a colony — our Jamestown to their Great Britain, a tributary state.

This is a bit of hyperbole, referring to England’s Jamestown Colony of Virginia, formed in 1607, but it illustrates the fear that Bannon is presenting of a reversal of roles between China and America, with China becoming the dominant world economic power.

Henry Kissinger, 94, was the Secretary of State in the administration of Richard Nixon whose “secret meeting” with China in 1971 permitted Nixon to “open China to the West” and invigorate US-China relations. As an international consultant, Kissinger has visited China more than 80 times since then. He is considered by many to be the most brilliant geopolitical strategist of our time. Most recently, Bannon met with Kissinger twice in September at Kissinger’s country home in Connecticut.

Both Bannon and Kissinger are experts on world and military history, and Bannon is also an expert on Generational Dynamics, so he understands that a new war between China and the US is approaching. As regular readers know, I’ve worked with Steve Bannon off and on for almost ten years.

Bannon frames the conflict with China in economic terms. He says that China is harming the U.S. by engaging in unfair trade practices, such as the forced transfer of U.S. technology to Chinese companies. According to Bannon, China’s historical disposition toward trading partners is exploitative and potentially ruinous:

There have been 4,000 years of Chinese diplomatic history, all centered on ‘barbarian management,’ minus the last 150 years.

It’s always about making the barbarians a tributary state. Our tribute to China is our technology — that’s what it takes to enter their market, and [they’ve taken] $3.5 trillion worth over the last 10 years. We have to give them the basic essence of American capitalism: our innovation.

What does Henry Kissinger think of all this? As it happens, Kissinger spoke at a Columbia University conference earlier this week. Possibly with his meetings with Bannon in mind, his speech emphasized that America and China must have been economic relations to avoid World War III and global destruction:

China’s Belt and Road Initiative, in seeking to connect China to Central Asia and eventually to Europe will have the practical significance of shifting the world’s center of gravity from the Atlantic to the Pacific and will involve the cultures of Eurasia, each of whom will have to decide what relationship to this region they will see, and so will the United States.

It is said by many scholars that never before has a power grown in one region as China is doing and that its interaction will lead to tensions and maybe even war. We do not have this choice. That would be a road to the disaster and would do to the world what World War II did to Europe.

Bannon and Kissinger share the view that China and America are headed for a world war, and both are them are (in my view) desperately looking for a way to avoid it, by means of an economic alliance.

From the point of view of Generational Dynamics, avoiding this world war is impossible. In every century for millennia, every continent of the world has had massive wars that have killed half the population. In the last century, there were two world wars, plus additional massive wars in Africa, China, South America and South Asia. That this will happen in this century is 100% certain. Bloomberg Businessweek and South China Morning Post (Hong Kong)

Lai, 57, took office on September 8. His long-held views on Taiwan’s independence from China were certainly well known to Taiwan’s president Tsai Ing-wen when she appointed him, and it’s even possible that the timing was chosen now, just before the Party Congress, to annoy Xi Jinping.

Lai delivered his first policy report to the legislature on Tuesday and said:

We are already an independent sovereign nation called the Republic of China. We don’t need a separate declaration of independence.

There was immediately a great deal of media speculation, in Taiwan and in China, as to what this means, and whether it indicates a change in Taiwan policy.

President Tsai Ing-wen issued a statement saying that her administration has never changed its position that “the Republic of China is a sovereign independent country,” nor has it changed its dedication to peace in the region and maintaining stability in the Taiwan Strait.

However, both Lai and Tsai have refused to endorse the “One-China policy,” also called the “1992 Consensus,” which states that there is only one China, and leaves some ambiguity as to what that means. Furthermore, Tsai has said in the past that “We won’t allow our sovereignty to be challenged or be exchanged for anything.” It was Tsai’s implicit support for independence that allowed her pro-independence Democratic Progressive Party (DPP) to win decisively in January 2016.

The mainland and Taiwan belong to China, and their relations are never state-to-state relationships, nor one China, one Taiwan. As an inseparable part of the Chinese territory, Taiwan is never a country, and can never become one.

Taiwan is an inseparable part of Chinese territory, has never been a country and can never become a country.

The mainland side resolutely opposes any form of ‘Taiwan independence’ words or action, and will never allow the historical tragedy of national separation to repeat itself. The consequences will be reaped for engaging in Taiwan independence separatism.

This threat of “consequences” is based on China’s “anti-secession law.” This law, passed by the Chinese Communist Party in 2005, requires China to invade Taiwan if Taiwan makes any move toward independence, whether by word or by deed. Arguably, the preconditions for such an invasion have been met repeatedly since Tsai took office.

As the 19th Party Congress approaches, Xi Jinping has suffered several recent humiliations and setbacks, including the decision for China’s army to stand down from invading Bhutan’s Doklam Plateau, rather than risk a war with India at this time. Perhaps even more significant, the belligerent actions by North Korea have forced Xi to take actions that support the United States over North Korea. This new humiliation over Taiwan certain cannot be pleasant, and he may feel forced, after the Party Congress, to take some action over the political need to score a win. Reuters and Xinhua and South China Morning Post (Hong Kong) and China Post (Taiwan) and New Bloom (Taiwan)