U.S. will move its Israeli embassy to Jerusalem on May 14 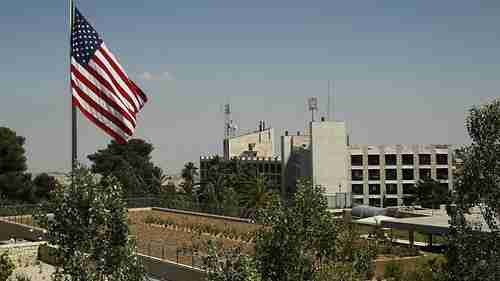 U.S. Consulate General in Jerusalem, to be used as interim embassy after May 14 (YNet)

The U.S. State Dept. announced on Friday that the U.S. will move its official embassy in Israel to Jerusalem from Tel Aviv on May 14, commemorating the 70th anniversary of the founding of Israel. The move had not been expected until the end of 2019, so this announcement caught many Israelis and Palestinians by surprise.

At the same time, a search will begin for the site of a new U.S. embassy building in Jerusalem. This search will be fraught with problems, according to the opinion of an Israeli analyst forwarded to me by a reader. The problems include the following:

YNet and Reuters and Newsweek

A big problem facing a new embassy building in Jerusalem is the cost, expected to be into the hundreds of millions of dollars.

The State Department attorneys are looking into the legality of accepting private donations to help pay for the construction of the new embassy. The question is being discussed because Sheldon Adelson, a pro-Israeli billionaire who has contributed tens of millions of dollars to the Republican Party, has offered to pay for some or all of the embassy costs.

Whether it is legal to allow one private individual to pay for the building costs of an official government building is currently being discussed, as it would be a significant departure from historical practice. In one possible scenario, the administration would solicit contributions not only from Adelson but potentially from other donors in the evangelical Christian and American Jewish communities, too.

Allowing Adelson to contribute would also raise national and international political issues in a situation where just the decision to move the embassy has already proved highly controversial. It could also raise new, unexpected issues. For example, would Adelson’s name be on the building? AP and VOX

Donald Trump’s December announcement that the embassy would move from Tel Aviv to Jerusalem, seeming to preclude having East Jerusalem as the capital of a Palestinian state, has infuriated Palestinian leaders, who said that the announcement proves that the US under Donald Trump is not an honest mediator, but is clearly biased in Israel’s favor.

Jerusalem is not off the negotiations table, rather the U.S. is outside the international consensus.

Those who say that Jerusalem is off the table are saying that peace is off the table. The holy city is in the hearts of each and every Palestinian, Arab, Christian and Muslim, and there will be no peace without East Jerusalem being the sovereign capital of the State of Palestine.

Trump could buy many things with his money, but he won’t be able to buy the dignity of our nation.

With Friday’s announcement moving up the date to May 14, an advisor to Palestinian Authority President Mahmoud Abbas said:

We know the Americans are coordinating every step with (Israeli President Benjamin) Netanyahu, but they do not do the same with President Abbas. In the end this is not good for peace, and no good for themselves, their own standing.

What we want is a clear statement that will allow the Palestinians to have a state of their own, independent, within the 1967 borders, with East Jerusalem as its capital.

What is particularly infuriating to Palestinians is that May 14 is “Naqba Day” – the “Day of Catastrophe” – the day that the Palestinians commemorate every year for the founding of Israel.

Saeb Erekat said that the move is a violation of international law:

The American administration’s decisions to recognize Jerusalem as Israel’s capital and choose the Palestinian people’s Naqba as the date for this step is a blatant violation of international law. [The result will be] the destruction of the two-state option, as well as a blatant provocation to all Arabs and Muslims.

May 14, the Day of Catastrophe (Naqba) is an extremely bitter day among Palestinians, not only because it was the day of Israel’s independence, but because the “catastrophe” refers to the Arabs’ catastrophic loss to the Jews in the Arab-Israeli War of 1948, a loss that many Arabs blame on themselves.

According to Palestinian narratives, between 1947-49, Israelis ethnically cleansed and destroyed about 530 Palestinian villages and cities, and killed about 15,000 Palestinians in a series of mass atrocities, leaving 750,000 Palestinians from a 1.9 million population without a home.

Israelis respond that the clashes were launched by Arab Liberation Army volunteers who attacked Jewish cities, settlements and armed forces, followed by an invasion by Arab armies from Lebanon, Transjordan, Syria, Iraq, Egypt, and Saudi Arabia.

However much Arabs are angry at Israelis for winning the war, many Arabs are even angrier at Arab leaders of the time for losing the war. Arab armies that attacked Israel expected an easy victory within a day or two over a tiny, fledgling country that was not perceived as a serious threat. They vastly underestimated the abilities of the Jewish militias in Palestine, who were well-prepared and well-organized and had many experienced fighters who had served in units of the British Army during World War II.

But the strongest Arab condemnations of all are that the Arab armies fought among themselves almost as much as they fought against the Jews. While Arab leaders claimed to be fighting for Palestine, they were actually fighting each other in a war of individual interests and conflicting goals. The rivalries between the Arab militias and armies contrasted with the much more unified Israeli militias and armies.

But the Arabs’ previous generational crisis war was World War I and the collapse of the Ottoman Empire. Just as the United States fought the Vietnam War half-heartedly during its Awakening era in the 1960s, the Arabs fought the 1948 Arab-Israeli war half-heartedly in its Awakening era. This generational timeline difference in public mood appears to have been the major factor in the Israelis’ victory over the Arabs. Haaretz (25-Jan) and USA Today and Al-Jazeera and AFP and Al-Jazeera (13-Jul-2009)