IRVINE, California — On Sunday, a group of roughly 50 Iranians gathered in Orange County Great Park for a “choose peace” rally to support the Iran deal.

The event, staged partly to generate images for social media, was organized by a group called OC4Peace, which is run by a team of volunteers from the National Iranian American Council, which has been described as a pro-regime lobby group.

Although the event was held to support the recent nuclear agreement, not all the Iranians present supported the deal.

Breitbart News spoke with a handful of Iranians standing silently on the sidelines as observers. Three college-aged men, who had moved from Iran to America three years ago, were among them. One man, named Kia, told Breitbart News, Wwe aren’t here to support the deal. We are just here for fun.” When asked about the likelihood that Iran will cheat, he told Breitbart News “If you ask me, I think Iran will definitely break the deal… and I think they already have [the] bomb.”

People gathered wearing blue t-shirts emblazoned with a white dove holding an olive branch in its beak. Underneath the image were the words “choose peace” followed by the hashtag #Irandeal. 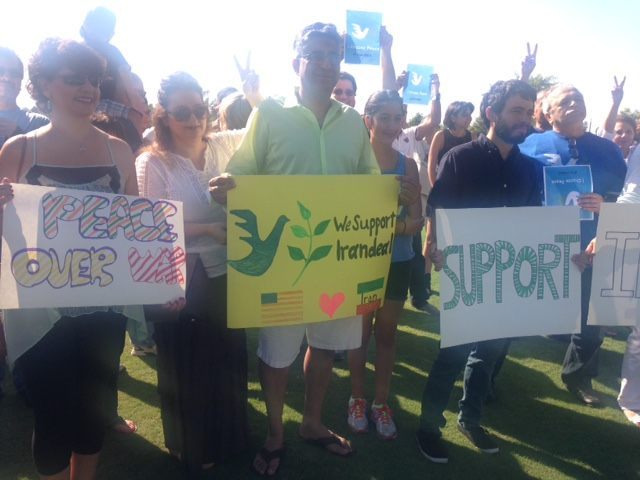 A man with the surname Adel spoke with Breitbart News about his support for the nuclear accords. He said he does not think the Iranian regime will be pursuing nuclear weapons–this time around. “No. They did that during Adhmadinejad. To tell the truth, they were pursuing that and that’s why they got crazy with the centrifuges and spent billions of dollars, wasted all of that technology.”

When pressed further about economic sanctions, Adel admitted that “the sanctions really worked. They came to their knees. They really crippled them.” Adel said the Iranian people are “happy…they are in the streets dancing and the hardliners are upset.”

Many people at Sunday’s “peace” event have family living in Iran. One woman told Breitbart News that while she has hope for Iran’s people, she believes the only individuals the deal would benefit are those who have the means to leave her nation.

“Iranians who are able to will escape to America with that money. Otherwise, they will suffer.”

A larger event and rally for individuals who support the Iran deal will be taking place in Los Angeles on August 15.