A new advertisement for Republican presidential candidate Ted Cruz highlights Cruz’ epic woodshedding of the leftist media for its bias on display during the CNBC GOP Presidential Debate, and the CNN Democratic debate. The ad shows the record-setting positive reaction to Cruz during the debate, and the robust favorable review on Twitter during and after the debate by nationally-known conservative radio hosts, television personalities, and writers of top-tier media outlets.

Titled, “When the Media Attacks, Ted Fights Back!,” the ad shows video where Senator Cruz goes on the offensive against the left media’s bias on display during the CNBC debate between the Republican presidential candidates. One candidate after another was asked agenda-driven questions that were biased and demeaning. When the time came for Cruz’s turn in the barrel, he turned the table and eviscerated the moderators from the CNBC panel.

The ad features Cruz’s response to their line of questioning. “Let me say something at the outset. The questions that have been asked so far in this debate illustrate why the American people don’t trust the media. This is not a cage match,” he said. “And, you look at the questions – Donald Trump, are you a comic book villain? Ben Carson, can you do math? John Kasich, will you insult two people over here? Marco Rubio, why don’t you resign? Jeb Bush, why have your numbers fallen? How about talking about the substantive issues people care about?”

He then compared the questions asked at this debate to those asked during the Democrat debate. “The contrast with the Democratic debate,” Cruz described, “where every fawning question from the media was – ‘Which of you is more handsome and wise?’” 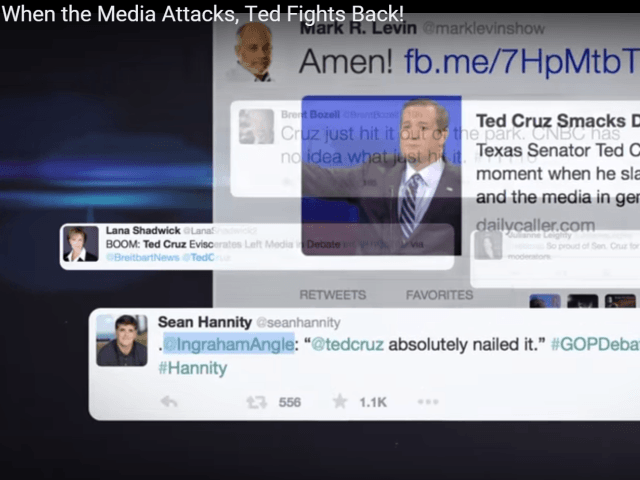 “BOOM. Ted Cruz Eviscerates Left Media in Debate,” Shadwick tweeted, attaching her Breitbart Texas article bearing the same title as her tweet. Her tweet appears at about the 56 second mark in the ad video above.

The Cruz ad shows Luntz on CBS This Morning saying, “It did the best of anything that I have tested since I started doing debate testing in 1996.”

The Cruz ad winds up with his quote from the debate where he praised his fellow Republican candidates. “The men and women on this stage,” Cruz began, “have more ideas, more experience, more common sense than every participant in the Democratic debate.”

“That debate reflected a debate between the Bolsheviks and the Mensheviks,” Cruz concluded in a quote that sent many scrambling to Google for clarification.