A Job Creators Network billboard in Times Square is calling out Rep. Alexandria Ocasio-Cortez (D-NY) for her “fuzzy math” after the left-wing Democrat took credit for Amazon’s decision to open a new office in Manhattan that will bring 1,500 new jobs to New York City.

“Although the jobs are welcomed, the new development doesn’t undo the harm sparked by Rep. Alexandria Ocasio-Cortez (AOC) earlier this year. Her vocal opposition to Amazon HQ2 in Queens led to the loss of 25,000 jobs in the city,” Job Creators Network, one of the country’s largest pro-jobs grassroots organizations, said in a statement. 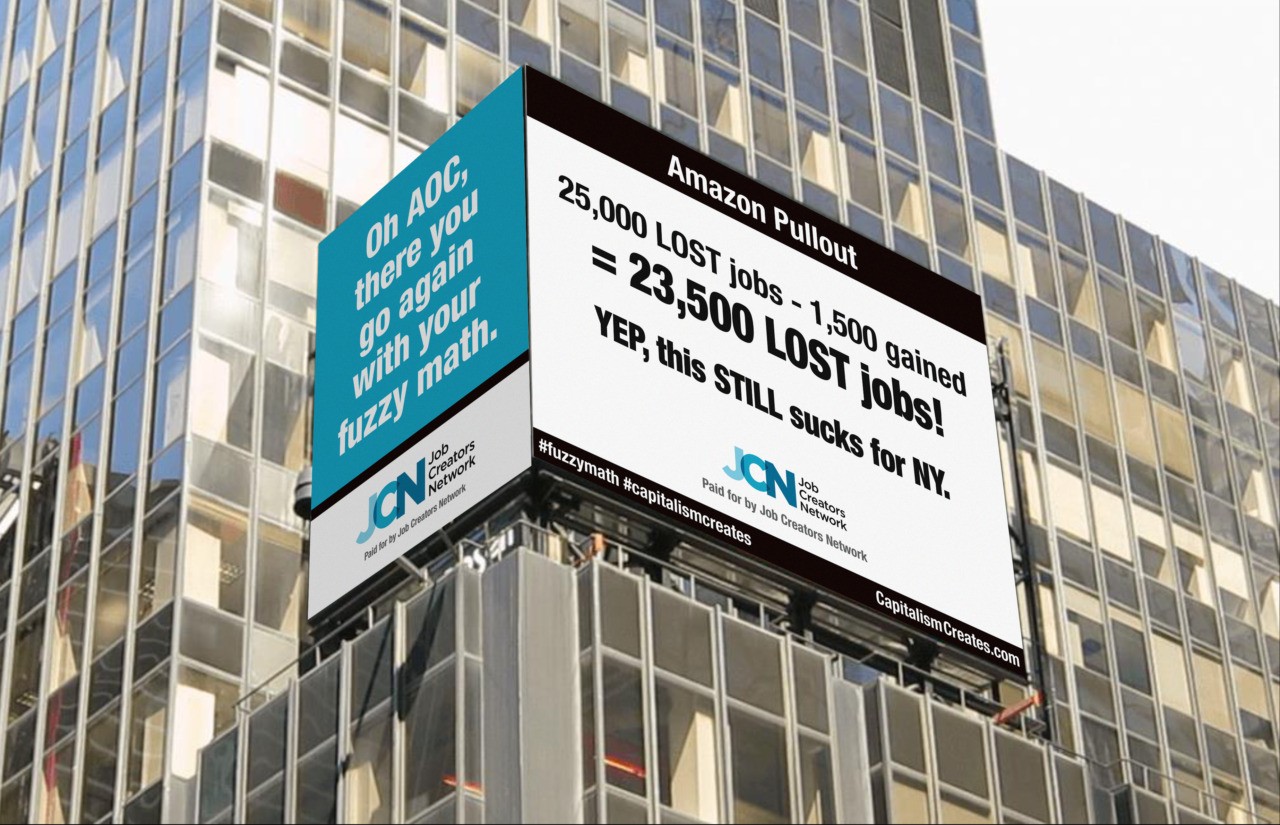 Indeed, Ocasio-Cortez helped kill Amazon’s plan last year to build a headquarters in New York City in exchange for an estimated $3 billion in tax breaks and state and city subsidies. The move, according to the company, would have created between 25,000 and 40,000 news jobs.

“Anything is possible: today was the day a group of dedicated, everyday New Yorkers & their neighbors defeated Amazon’s corporate greed, its worker exploitation, and the power of the richest man in the world,” Ocasio-Cortez said after Amazon pulled out of the deal.

“Me waiting on the haters to apologize after we were proven right on Amazon and saved the public billions,” Ocasio-Cortez said, celebrating herself.

Me waiting on the haters to apologize after we were proven right on Amazon and saved the public billions https://t.co/AC64pG0nZI pic.twitter.com/xzCepkX4AV

JCN, though, is pushing back on Ocasio-Cortez’s “fuzzy math.”

“More jobs are always a good thing, which is why we applaud Amazon for bringing 1,500 new jobs to New York City,” said Alfredo Ortiz, President and CEO of the Job Creators Network.

“However, as our billboard located in the heart of Times Square shows, the creation of 1,500 new jobs does not undo the economic harm sparked by Rep. Alexandria Ocasio-Cortez earlier in the year: a loss of 25,000 jobs and $12 billion in economic activity for Long Island City. AOC is expecting an apology, but what she really deserves is a failing grade in basic math.”