Karen Graham, a “misinformation process manager” at Facebook, tasked with managing what the platform deems to be “misinformation,” is openly playing partisan politics by using her Linked In profile to demonstrate her support for the radical Black Lives Matter movement.

Prior to working at Facebook, Graham spent over fifteen years at the CIA as an operations officer with the Agency’s Directorate of Operations. Her career at the CIA spanned the years 2004 – 2020, encompassing the entirety of John Brennan’s tenure as Director.

Her LinkedIn profile currently sports a picture of a giant “Black Lives Matter” street mural that was recently imposed upon Washington D.C. at the order of the Democrat Mayor, Muriel Bowser. 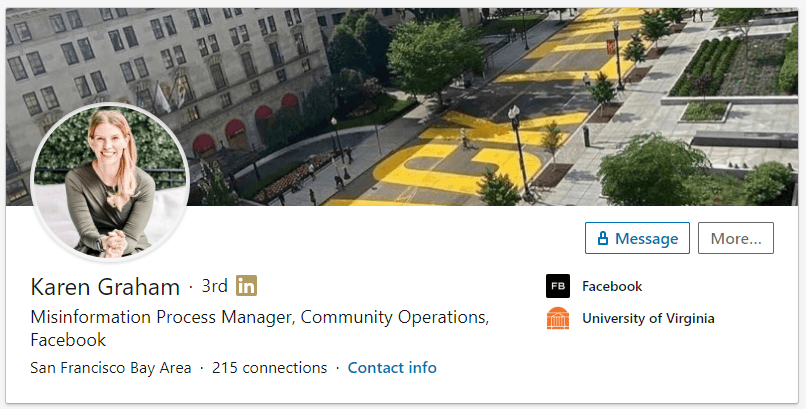 The DC BLM street mural has become an overtly partisan political symbol, as Bowser–DC’s mayor– even appeared during the opening night of the virtual Democratic National Convention (DNC) on Monday evening with it in the background. Mayor Bowser also created a specific exception for Black Lives Matter, allowing the group to paint its slogan on D.C’s streets but denying the opportunity to others.

“While we were peacefully protesting, Donald Trump was plotting,” Bowser said during her DNC speech pushing Democrat presidential candidate Joe Biden over the current president, Republican Donald Trump, with the mural as her background. “He stood in front of one of our most treasured houses of worship and held the Bible for a photo op. He sent troops in camouflage into our streets. He sent tear gas into the air and federal helicopters, too. I knew if he did this to D.C., he would do it to your city or your town. And that’s when I said enough.”

That makes Graham having such an overtly political message on her page even more curious. As a “misinformation process manager,” Graham is involved in an area of Facebook’s operations that has been used to censor conservative publications.

“Misinformation” is a highly flexible word that can be used to cover all sorts of claims and arguments that are politicized or in dispute.

Facebook CEO Mark Zuckerberg has personally intervened to prevent criticism of Black Lives Matter within the tech company, scolding employees in 2016 for replacing “Black Lives Matter” slogans with “All Lives Matter” on a shared company wall. The company has not replied to a Breitbart News request for comment on Graham’s political statements.