The anti-Christian CNN chose to cover Friday’s Values Voters Summit with a chyron that blasted the three-day gathering of social and religious conservatives activists as “anti-gay.” Unless there is something else going on I’m unaware of, CNN is smearing this organization as anti-gay based only on their opposition to same-sex marriage — a position President Obama held until last year: 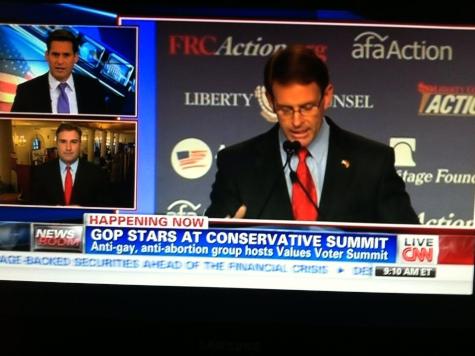 CNN’s hostility towards Christianity has been well-documented over the years. Late last year, the left-wing network blamed Christianity for teen suicides and earlier this year CNN’s Erin Burnett attacked the Catholic Church during a bizarre, concern-trolling editorial.