President Trump blasted the left-wing Washington Post’s Dave Weigel after the reporter taunted him with a fake photograph that falsely depicted a mostly empty auditorium at the president’s Friday night rally. After receiving an apology, the president said Weigel “should be fired.”

Although everyone knows (and any exceptions do not include political journalists) that Trump’s Friday night rally in Pensacola, Florida, was another jam-packed event with a near-capacity crowd of 12,000,  Weigel appeared to be under the impression that the media has not already suffered enough of a black eye this week.

There is no other way to explain why Weigel would use his verified Twitter account to openly taunt Trump with photographic fake news: 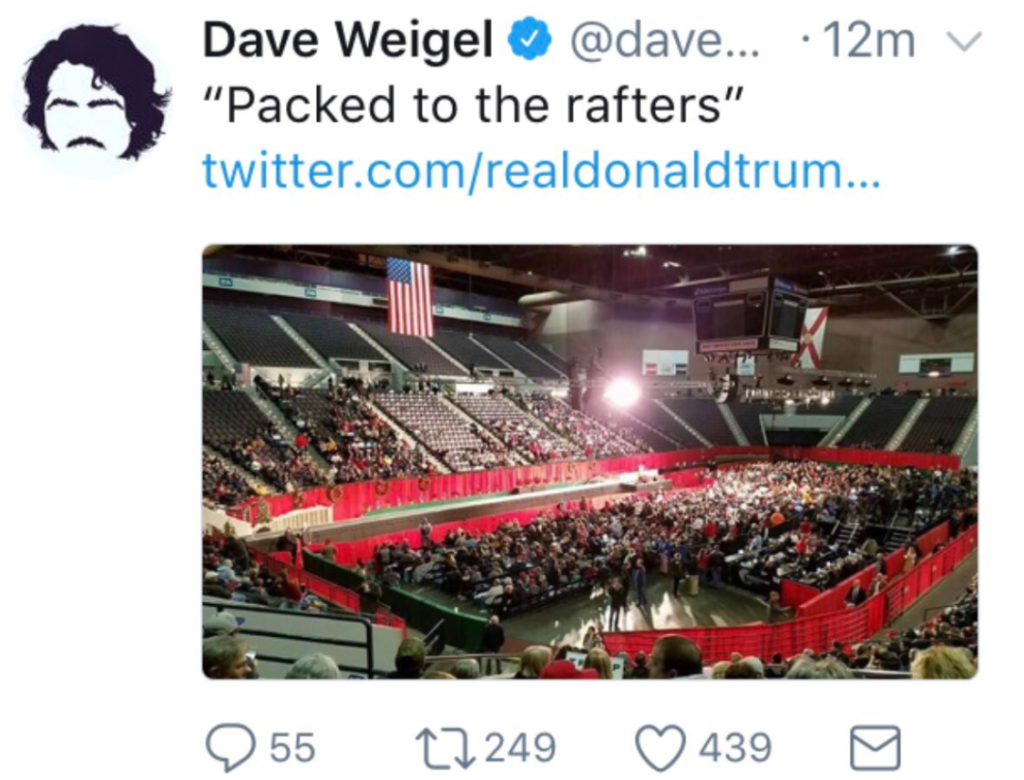 The context here is crucially important…

1) The photo Weigel published was taken before the Trump rally began. And, as you will see below, Weigel knew he was publishing a photo not taken during the actual rally.

2) Weigel, who identifies as an objective reporter, is not only publishing a misleading photo, but the link at the top of his now-deleted tweet proves that he is responding directly to one of Trump’s tweets — in other words, he is publicly heckling the president personally.

3) By responding directly to the president in this way, Weigel is openly taunting Trump, even going so far as to troll the president with his own “packed to the rafters” comment.

Even if the photo had been a legitimate representation of the crowd-size, directly jeering the president in this way is still outrageous behavior from anyone who describes himself as a legitimate journalist.

The only problem is that Weigel’s photo was not legitimate, and Trump called him out on it:

.@DaveWeigel @WashingtonPost put out a phony photo of an empty arena hours before I arrived @ the venue, w/ thousands of people outside, on their way in. Real photos now shown as I spoke. Packed house, many people unable to get in. Demand apology & retraction from FAKE NEWS WaPo! pic.twitter.com/XAblFGh1ob

Weigel responded quickly with an apology, the claim that he had already deleted tweet, and the excuse that he “was confused by the image of you walking in the bottom right corner” — which only proves that Weigel knew the photo was not taken during the rally.

Sure thing: I apologize. I deleted the photo after @dmartosko told me I'd gotten it wrong. Was confused by the image of you walking in the bottom right corner. https://t.co/fQY7GMNSaD

Weigel is claiming that in his fake news photograph, this is Trump: 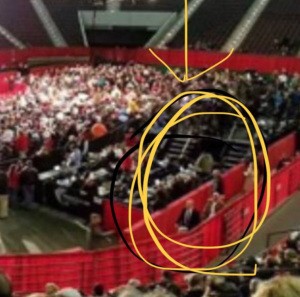 Well, even if that is Trump, it is a backstage photo. Therefore, Weigel has no idea what time that particular photo was taken, and no one with any sense of ethics or concern for accuracy would judge crowd size based on any photograph without Trump standing at the podium.

Trump was not interested in Weigel’s apology, and fired back with “FAKE NEWS, he should be fired.”

.@daveweigel of the Washington Post just admitted that his picture was a FAKE (fraud?) showing an almost empty arena last night for my speech in Pensacola when, in fact, he knew the arena was packed (as shown also on T.V.). FAKE NEWS, he should be fired.

Naturally, the elite media responded — not by admonishing Weigel over his inexcusably inaccurate trolling — but with their favorite claim that Trump is the one man in America who does not have the First Amendment right to criticize the media:

The president calling for a journalist to be fired seems like a public threat to the First Amendment. https://t.co/Vx4csNtIP4

And apologized as Trump demanded. And then Trump said that’s not enough. Almost feels like wanting the apology wasn’t the point. https://t.co/v3dwtpC8Gr

The best reporters make errors; @daveweigel is a great reporter who made a mistake and corrected it, only to end up bullied by the president of the United States, who has a lengthy record of false statements and a nonexistent record of correcting them.

But how do Weigel’s elite colleagues respond? No reprimands. No embarrassment. No reaction that indicates in any way that they are concerned with holding on to whatever residual integrity might remain in their discredited institution. Instead, they all make excuses for the inexcusable and attack the president as though he does not have his own free speech rights, as though the elite media is exempt from criticism.

If you wanted to destroy the media by planting confederates in newsrooms all around the country, over this last week, none of your saboteurs could have been anywhere near as effective as the self-destructive Weigel, Maggie Haberman, Brian Ross, Alisyn Camerota; and everyone at CNN, the Washington Post, Reuters, and PolitiFact.