#USBP Laredo North agents working at the I-35 checkpoint, intercepted two human smuggling attempts within hours of each other. Agents apprehended 22 illegal aliens that were concealed in the sleeper compartments and discovered a loaded revolver. #BorderSecurity @CBPSouthTexas pic.twitter.com/c0e7KCmzsA

Agents responded and, with the help of a CBP Air and Marine Operations helicopter aircrew, located a group of five migrants walking a trail in the brush.

The agents conducted a search of the migrants and found a backpack that contained a loaded shotgun. 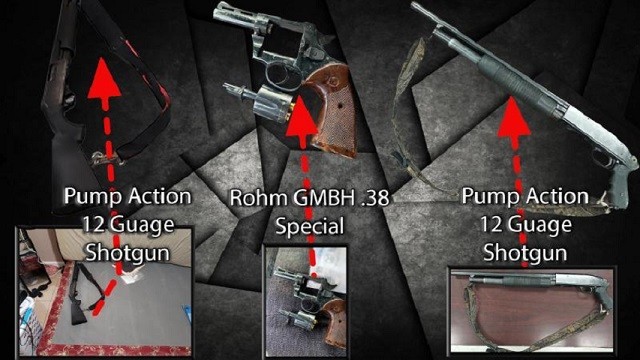 An immigration interview identified all five of the migrants as Mexican and Guatemalan nationals —  all illegally present in the United States, officials stated.

The team conducted a “knock and talk” at the residence and discovered a group of nine people being warehoused in the house located on Zapata Highway in south Laredo. Agents conducted an immigration interview and identified the nine people as illegal immigrants from Mexico and Ecuador. They also arrested a U.S. citizen in the home who is suspected of being involved in the human smuggling incident.

During a search of the residence, agents recovered a stolen shotgun and rounds of ammunition.

The following day, Laredo North Station agents assigned to the Interstate 35 immigration checkpoint observed a tractor-trailer approaching for inspection. During the initial inspection, a Border Patrol K-9 alerted to a scent it is trained to detect. The agents referred the driver to a secondary inspection station.

A search of the tractor led to the discovery of 12 people hiding in the cab. Agents identified all 12 as illegal immigrants, officials said. An immigration interview concluded that the migrants came to the U.S. from Guatemala and Mexico.

The agents conducted a background check on the driver, a U.S. citizen, and discovered an active warrant for Contempt of Court from a court in Loving, New Mexico. A search of the tractor led to the discovery of a loaded handgun.

“Human smugglers are willing to use illegal weapons to conduct human smuggling events of individuals in groups without PPE that not only endangers the people being smuggled but the safety of our Nation,” Laredo Sector officials said in a written statement.