The Police Service of Northern Ireland (PSNI) are appealing for witnesses after they arrested a 32-year old Somalian man on suspicion of murder in Belfast yesterday. 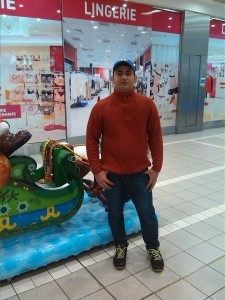 Victim Bhatti poses in Belfast, in a picture from his Facebook profile.

Although little is presently known of the victim, 29 year old Pakistani national Mohsin Bhatti, his surname is common among Sikh and Hindi families in the Pakistani borders and Punjab region of Northern India. The Belfast Telegraph reports his killer shouted ‘pro-Islamic slogans’ Bhatti was stabbed to death, but police said they were not treating the killing as a ‘hate crime’.

A PSNI spokesman said: “The victim had been stabbed a number of times and he died at the scene as a result of his injuries. We are following a number of lines of enquiry but we are keeping an open mind about a possible motive.

“We have recovered two knives from the scene. These are currently being examined as part of the investigation. A second scene has been established in a flat at 18 India Street, a short distance from where the victim was found”.

The suspect has now been transferred to a secure mental health unit.