He may have managed to find a few of his favourite Ferrero-Rocher chocolates, but from his twitter account it seems that former Morrisons security guard turned jihadi is not being spoiled.

Omar Hussein, who left home where he lived with his mother, his having real difficulty living the life of a jihadi fighter – struggling even to take care of his personal admin let alone join front line fighters in trying to bring about a repressive, violent Islamic caliphate, the Daily Mail reports.

His social media timeline demonstrates that while others are engaged in a fight to the death in the terrorist occupied lands, Hussain is struggling to even wash his own clothes and admits in one tweet it took him almost an hour to peel potatoes for his dinner.

The hapless Hussein moaned that he was too tired after his monumental task of peeling tatties to even chop them: 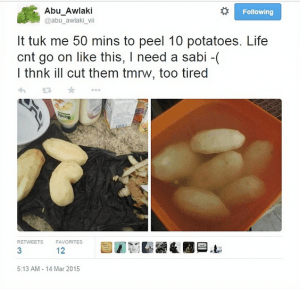 The updates show a bored, lonely man who doesn’t go anywhere near the front line, but just scrounges off the others.

He has shown off his attempts at cooking, saying he was ‘what the Oxford dictionary defines as, a Chef! Tuk! (sic) before posting a photo of some brown slop and telling his followers is took him 27 minutes to make two servings.

Most recently he has struggled washing his clothes, saying he gets flustered when it begins to rain and his washing is still out on the line.

But it’s not all domestic drudgery: he has also posted a picture of a local gym he once visited as well as photos of himself sunbathing by a pool in Syria. And the chocaholic was delighted when he managed to find himself a Ferrero-rocher, saying ‘chocolate can do wonders when ur feeling lonely, lol. And he was delighted when he managed to secure himself a packed of jaffa cakes, saying he hadn’t had one in a year.

Hussein has also posted a picture of his local gym, which he appears to have once visited. He also showed off his photos of himself lazily lounging by a swimming pool in Syria.

But his piety was brought into question by his love of decadent western luxuries:

The 27 year old, originally from High Wycombe, first came to prominance when he appeared in a propaganda video for IS, urging the west to send troops and vowing, ”we’ll send them back one by one in coffins.’

And in August last year he appeared on BBC’s Newsnight, saying: ‘I hate the UK, the only reason why I would intend to return to the UK is when I want to come and plant a bomb somewhere.’

But Awlaki’s messages did not fall on sympathetic ears with the site’s other users sending him suggestions including coming home to Britain to enjoy the company of fellow prisoners.

@abu_awlaki_vii I read you tweet about loneliness with great sadness. Come to England where you'll find plenty of company in prison.

And others simply saying ‘good I hope you die alone’