The British Hindu Temple’s Presidents Conference 2016 has been cancelled after a sustained and aggressive campaign by far left activists who took offence at the fact that Tommy Robinson, an organiser of PEGIDA UK, had been invited to speak and engage in dialogue with the Hindu community.

The General Secretary of the National Council of Hindu Temples (NCHT), Satish K Sharma, told Breitbart London that blogger and journalism lecturer Sunny Hundal had “spread nonsense on Facebook” about the event and compared some “aggressive” far left activists involved in the campaign to the far right.

Mr. Robinson claimed that the “event has been cancelled after threats instigated by Sunny Hundal”, a well know Twitter activist who has argued that, “the far-right is using ‘divide and rule’ between Sikhs and Muslims”.

“Individuals opposing Tommy Robinson have threatened to directly disturb the tranquillity of the Temple Venue,” Mr. Sharma added. Mr. Robinson described the attacks as “another nail in the coffin of free speech”.

Glad the National Council on Hindu Temples realised that inviting a guy who used to head up a neo-Nazi group wasn’t good PR for them.

Sikh Twitter users also blasted Mr. Hundal, with one stating: “Sunny caused threats to that Hindu temple and shut down free speech. He’s an embarrassment and no Sikh at all” and another saying: “Sunny hundal hates Hindus, no wonder he threatened to run ruckus inside Hindu temple”.

Mr. Sharma also slammed the left wing groups for not trying to contact or “engage” with him before beginning their campaign. The only one that called him was Hope Not Hate, a Wall Street hedge fund backed group that has recently implied that anti-Sharia Muslims are extremists.

Sunder Katwala, Director of the EU and hedge-fund backed British Future group, accused the NCHT of having a “penchant for extremism”. An e-mail circulated by a different left wing group attacked the NCHT’s decisions as “disgusting”, accusing Mr. Robinson of being “racist scum” and inciting readers to act.

“Tommy Robinson reached out to us last year”, he explained. “We weren’t aware of his peppered passed at first, but we are always open to hearing new perspectives.”

The anti-Islamisation campaigner had been due to speak at the event, one of the largest events on the British Hindu calendar, this February, at Southall Hindu temple in West London. Also on the bill was Dr. Subramanian Swamy, a famous Indian politician, economist and a former government cabinet minister.

In a statement Mr. Sharma said that hosting Mr. Robinson, “is quintessentially Hindu, to see him as flawed as we all are, as a flawed young man struggling on a life journey like the rest of us, is essentially Hindu and it was he who first extended a desire to engage.”

He highlighted how Mr. Robinson had been given a platform at Oxford University, and said that “our youngsters are already engaging with him, are aware of him and several have expressed a desire to debate with him directly.” 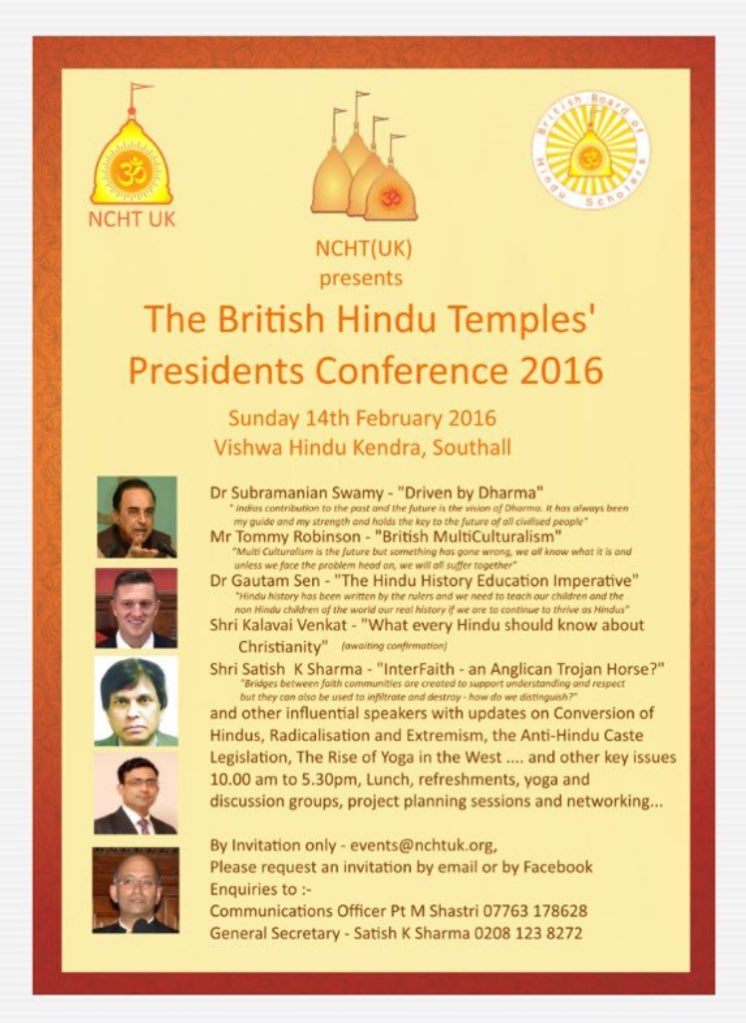 Mr. Robinson has been building strong relations with the patriotic British Hindu and Sikh communities for a decade. There was a Sikh ‘division’ in the English Defence League (EDL), his old organisation, and he has shared platforms with members of both communities many times before.

Hindu and Sikh girls have been badly affected by Muslim grooming gangs — both here in the UK and in India — and it is Mr. Robinson work in tackling the problem that has often brought the groups together.

At the cancelled event, Mr. Robinson was due to talk about the successes and failures of multiculturalism in the UK, and was quoted on the poster as saying: “Multiculturalism is the future but something has gone wrong, we all know what it is and unless we face the problem head on, we will all suffer together”.

Mr. Sharma said that all too often, “Hindus & Sikhs are targeted and attacked because we are all ‘Asians’”, giving multiple example of Hindu temples being desecrated and elders threatened.

Explaining that it, “is tragically probable that extremist attacks in Europe are going to increase, it is predictable that the uninformed far right will respond with uncontrolled rage as we are already seeing now in France, and whenever this happens, they do not ask whether that young brown person is Hindu or Muslim or Sikh…”

“I will continue to reach out to Sikh & Hindu minorities & make sure working class communities understand just how great these minority groups have integrated into Britain”, Mr. Robinson told Breitbart London in a statement.

“For too long these groups have been attacked and tarred because of the hatred coming out of the Islamic community. Muslim crimes are NOT Asian crimes”, he said.

Mr. Sharman was keen to emphasise that his organisation is “a spiritual one, not a political one” and stressed that he does not want to become embroiled in a media spat. He said it was “depressing that the tranquil sanctuary” of the Temple had become the target of a “political campaign”. He also mentioned that the Temple has been targeted by Awaaz protesters, who projected a Nazi swastika onto the British Parliament on Remembrance Sunday to highlight Prime Minister Narendra Modi’s visit to London. Campaigners branded Mr. Modi a new “Hitler”.

“So we have a situation where allegedly Hindu groups and individuals, purporting to be the ‘Voice’ of British Hindus, trumpeting their desire to defend Hindus from the far right, themselves openly threatened to disturb the sacred tranquility of a Hindu Temple, and in doing so prevented a dialogue, carefully cultivated specifically to challenge attacks on Hindu temples and places of religious worship, attacks perpetrated by the far right. Irony indeed”, he wrote.

Concluding: “The questions which are left are for all to consider. Who is the aggressor in this instant, whose behaviour is consistent with the changing needs of the times, whose actions have caused real harm to inter-community dialogue and who are the real losers. Perhaps all of us.”

They warning of Cologne-style “mass, planned rape and sexual assault”, urging the British government to disregard “political correctness”, learn lessons from Rotherham and crack down on Muslim violence against white and Asian non-Muslim women.