SOUTH THANET, United Kingdom – The theme from the Great Escape started to boom from the speakers of the open-top, UKIP Battle Bus as it turned the corner onto Ramsgate Harbour. It was all too familiar a sight, for me at least, to see UK Independence Party leader make his way along the Port of Ramsgate, chatting to locals, asking them for their vote in the upcoming referendum.

I was with Mr. Farage, albeit on the other side of the camera when he challenged the establishment in the South Thanet seat in 2015. We lost, as you’re probably aware, though we had a massive 27 per cent swing in our favour. Now it is becoming increasingly clear that the Conservative Party may have cheated with their spending last year, and it’s the talk of the town. That and the referendum. 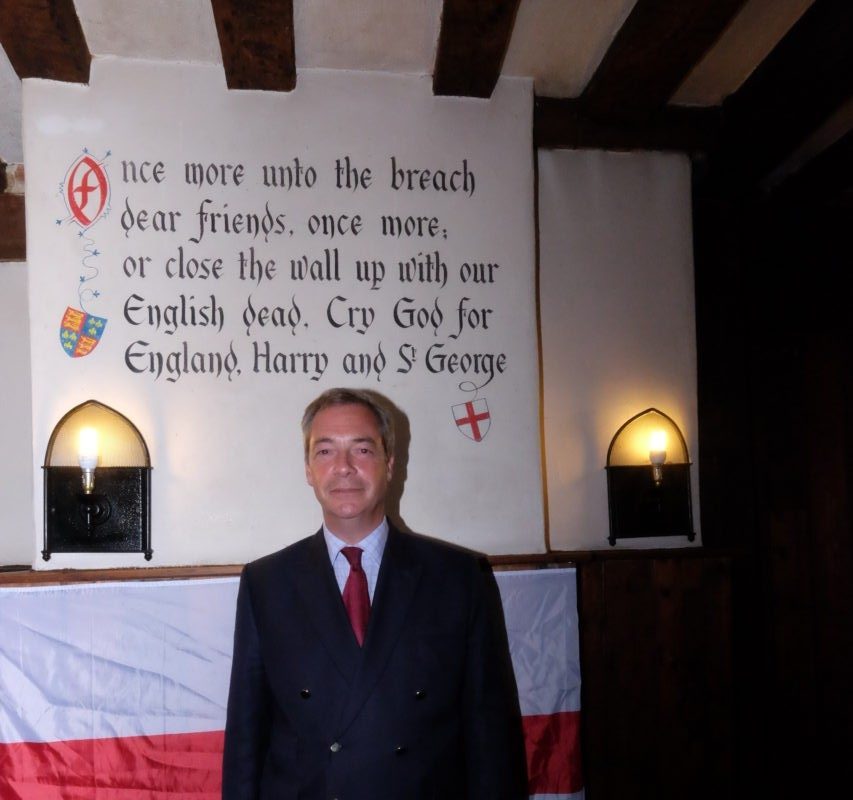 “Once more unto the breach”

So once more unto the breach for Nigel as he toured the town centre: “Bringing back memories is it, Raheem?” he said. And it indeed it did.

But it was also an interesting journalistic endeavour to have been on one side, and watch them from the outside now.

“Raheem, where do we go?” they asked, unsure of the lay of the high street, and wary that some “antis” – Hope Not Hate activists – would turn up and ruin their fun. Nigel was too busy shaking hands and popping into local shops to notice.

“Are we voting Leave?” he asked four men outside the Village Grill cafe. “Absolutely,” they replied, before going onto joke that they had only arrived in town “for a quiet cup of tea” before being dazzled by dozens of cameramen, activists, and well-wishers.

Ramsgate felt different yesterday. There weren’t the throngs of Labour supporters hurling abuse at the UKIP leader. There wasn’t the faint sense that “we might lose”. Ramsgate and indeed South Thanet are most definitely voting to Leave the European Union.

Behind the UKIP bus was a slightly more modern, air-conditioned, sleek coach. A perfect analogy, really. It belonged to Geenpiel, the Dutch activists who forced a referendum on the European Union in the Netherlands – and won – using modern media, online activism, and even drones. Nigel kept recalling to me the drones from when he visited during the Dutch plebiscite. 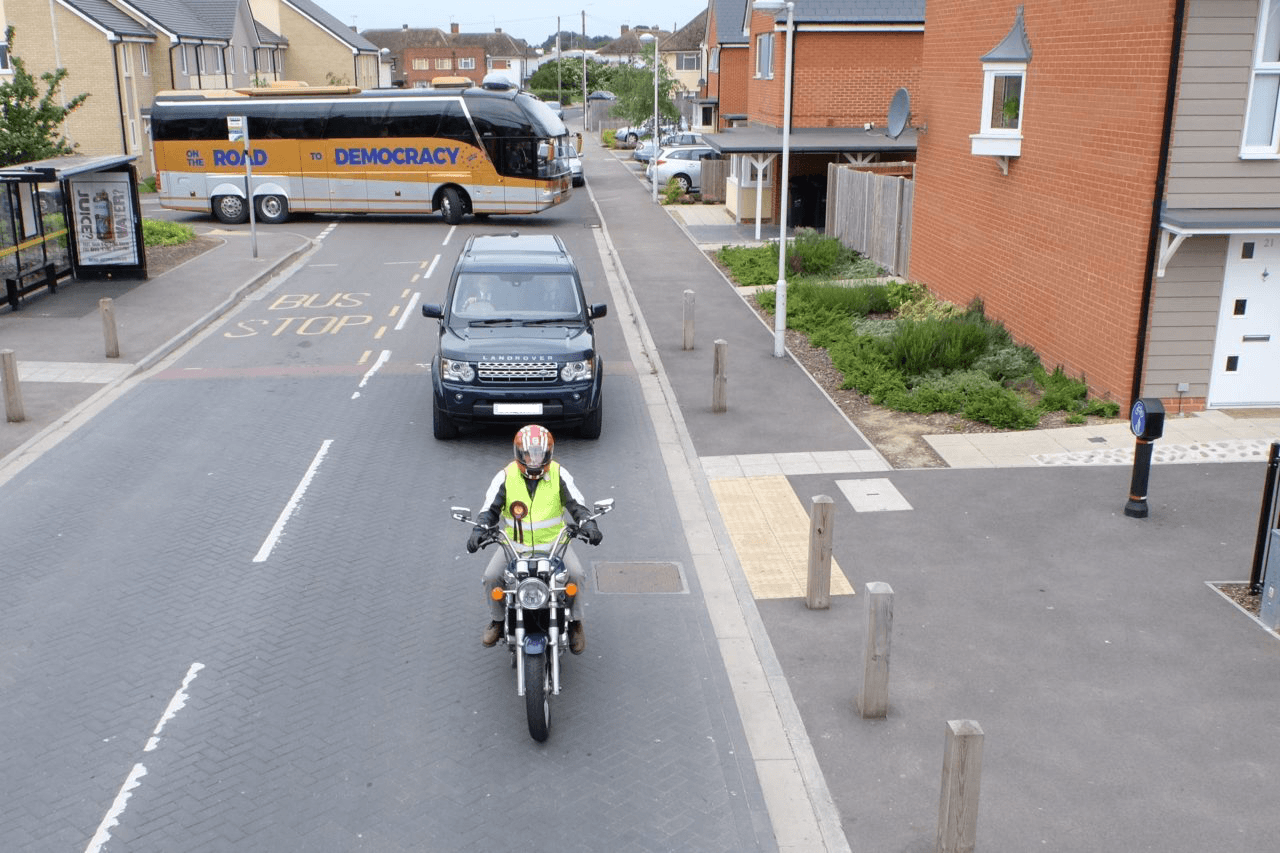 The GeenPeil bus, with UKIP outrider, navigates the tight roads in South Thanet

“I’ve never shot a drone,” he mused on several occasions.

Emblazoned on the side of the GeenPeil coach are the words: “On The Road To Democracy”.

“We’re here to return the favour of Nigel coming to the Netherlands,” they told me.

It is evident to me, as ever, that the UKIP campaign is hardly the slickest, most organised in the world. But there’s a charm to that hodge-podge, “where do we go now?”, minimal-itinerary approach. It may not be the best use of Nigel’s time, but there are some in UKIP who wouldn’t have it any other way. And it keeps the “antis” on their toes. Despite a call to action against Farage yesterday, they were unable to locate or disrupt him.

And Nigel and co were fully aware that while we’re moving into a “get out the vote” part of the campaign – with just over eight days to go until the referendum – they still had minds to change. The butchers he visited were sceptical, clearly what we’d call “Soft Leavers” who might return to the status quo at the last minute, in the polling booth, voting for the status quo in the face of uncertainty or risk. But Farage set them right. 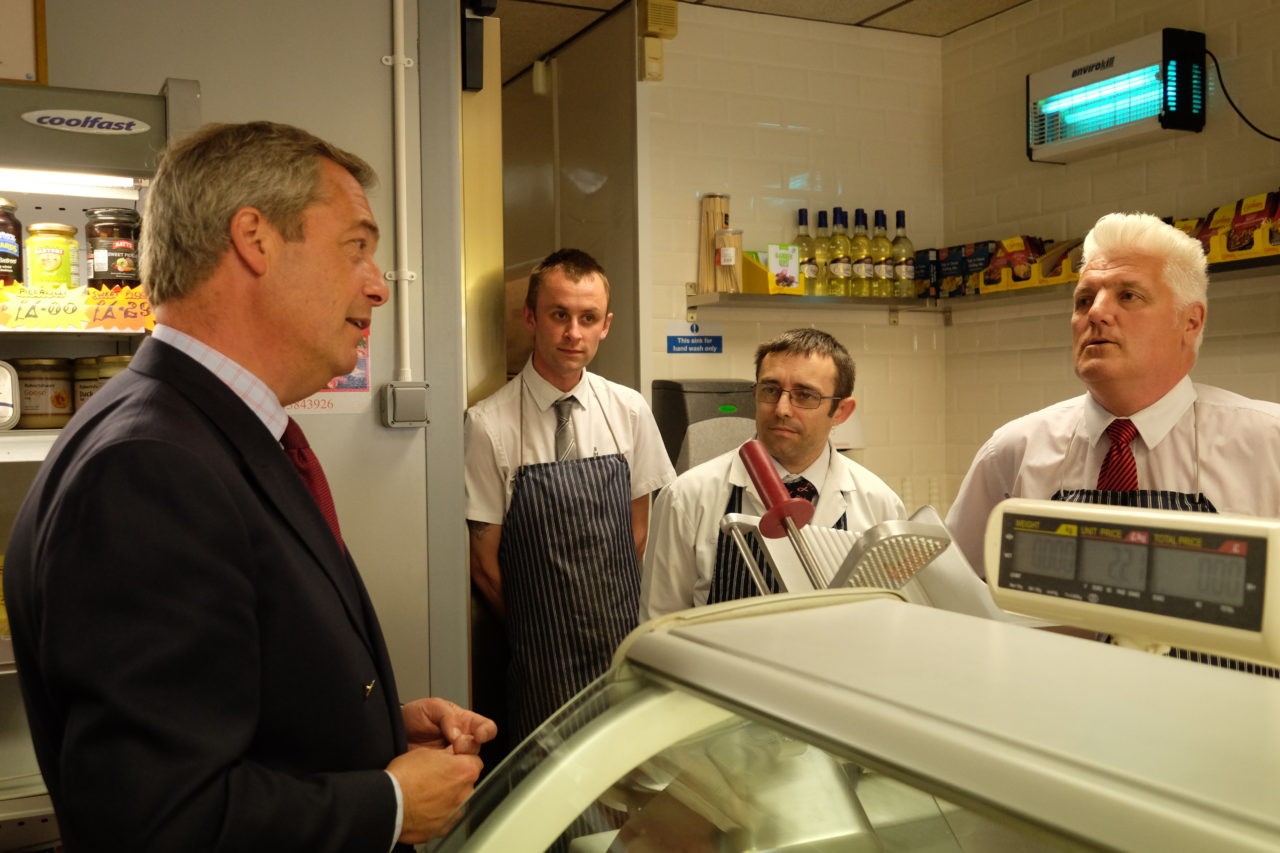 “All I’ve ever known is in,” said the proprietor, to which Nigel replied, “The key is we will be in charge of our own destiny… to be honest, what our forebears fought for. So that we could be a free, independent nation.”

Indeed it is these arguments, about sovereignty, about democracy, and about national identity that are ringing true the most which Britons up and down the country. 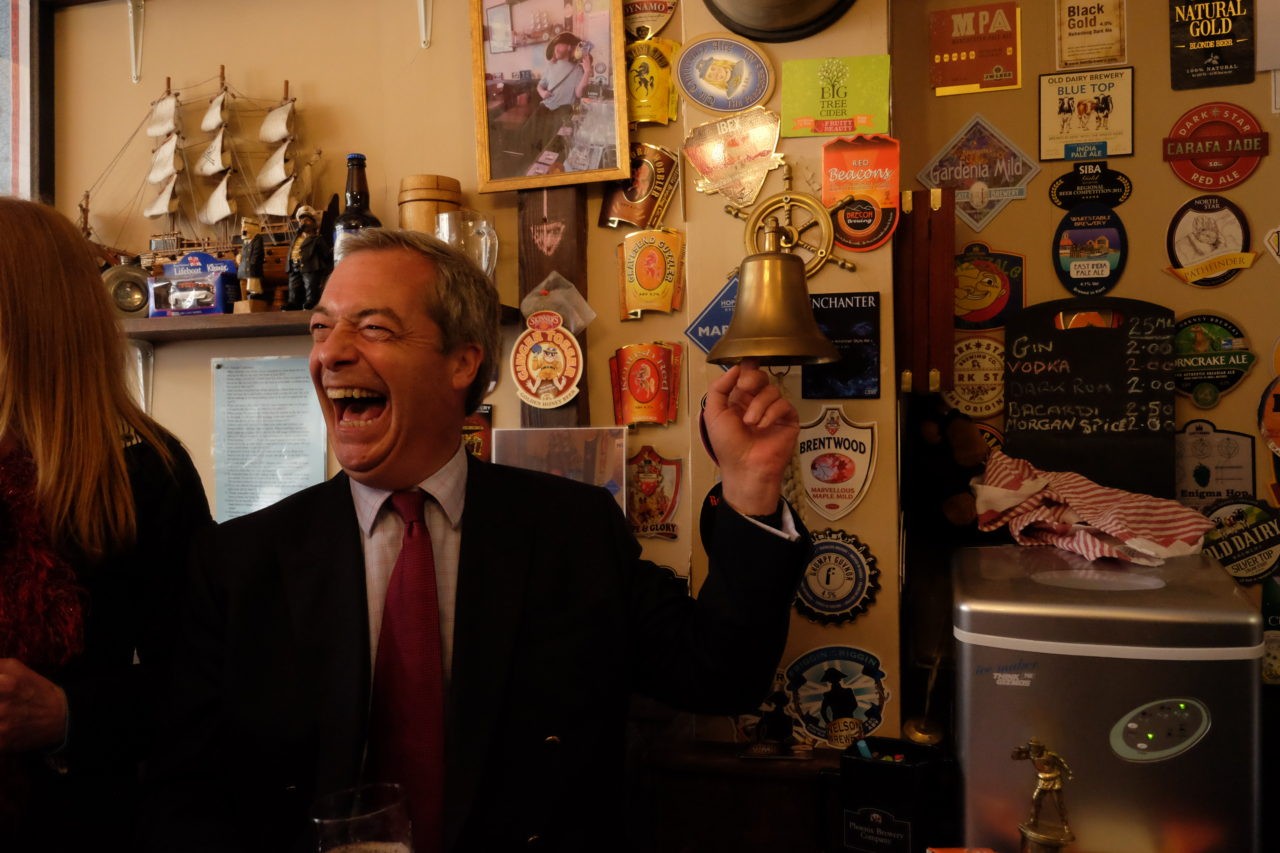 “I am calling time on our membership of the European Union!”

Vote Leave – the official campaign designated by the Electoral Commission – were insistent that this should not form the crux of the campaign. But in the past two weeks they too have come around to Farage’s message, and now all the polls point to leaving.

The second best response to yesterday’s tour was in Birchington – an area which saw two Tories and three UKIP councillors elected in 2015. 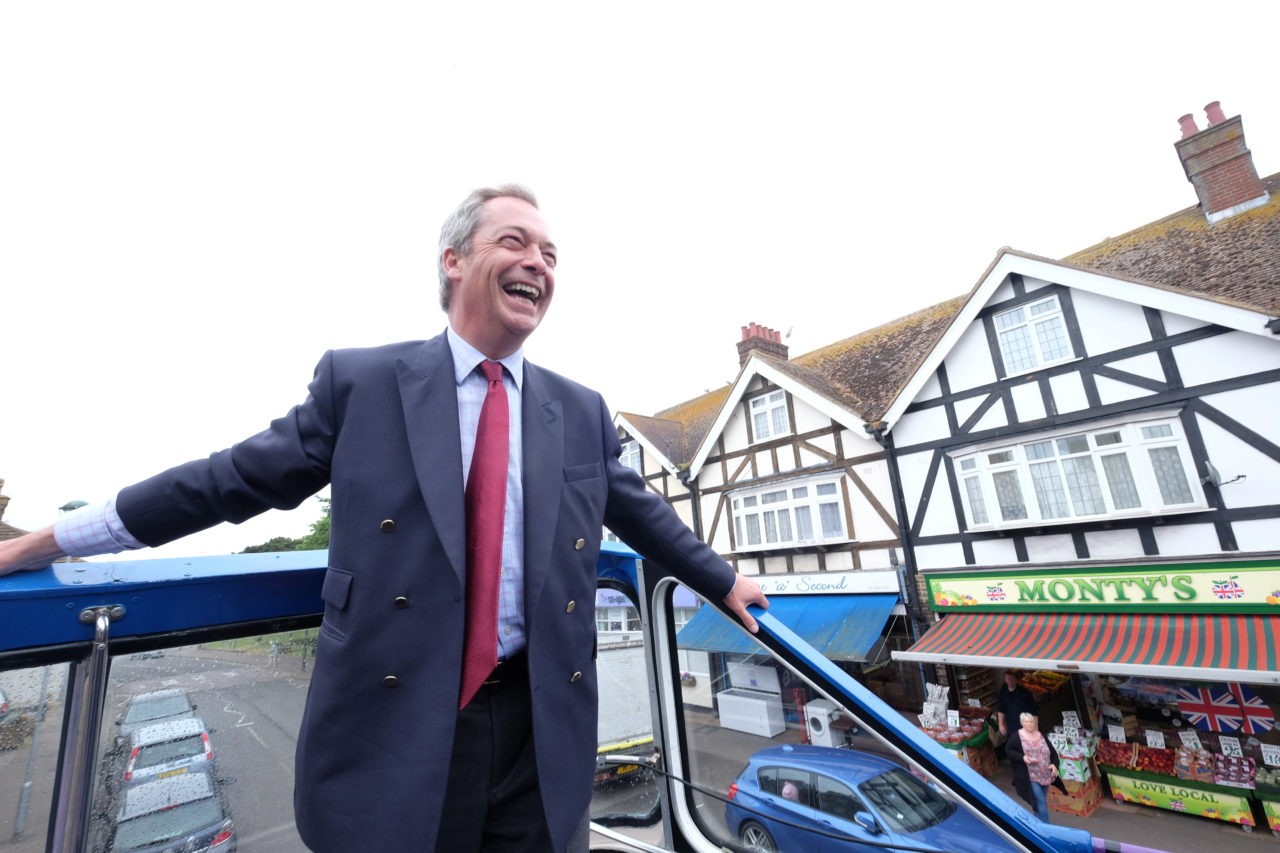 Atop the bus in Birchington

It was there that Nigel showed his eclectic appeal: being dragged into a nail salon one minute and a pub the next.

“That’s a really famous person!” one mother told her child. “I’m actually really surprised. I’m really excited,” she declared as Nigel stopped to talk selfies, bounding into the road as cars honked their horns and stopped, their drivers declaring, “Out! Out! Out!” 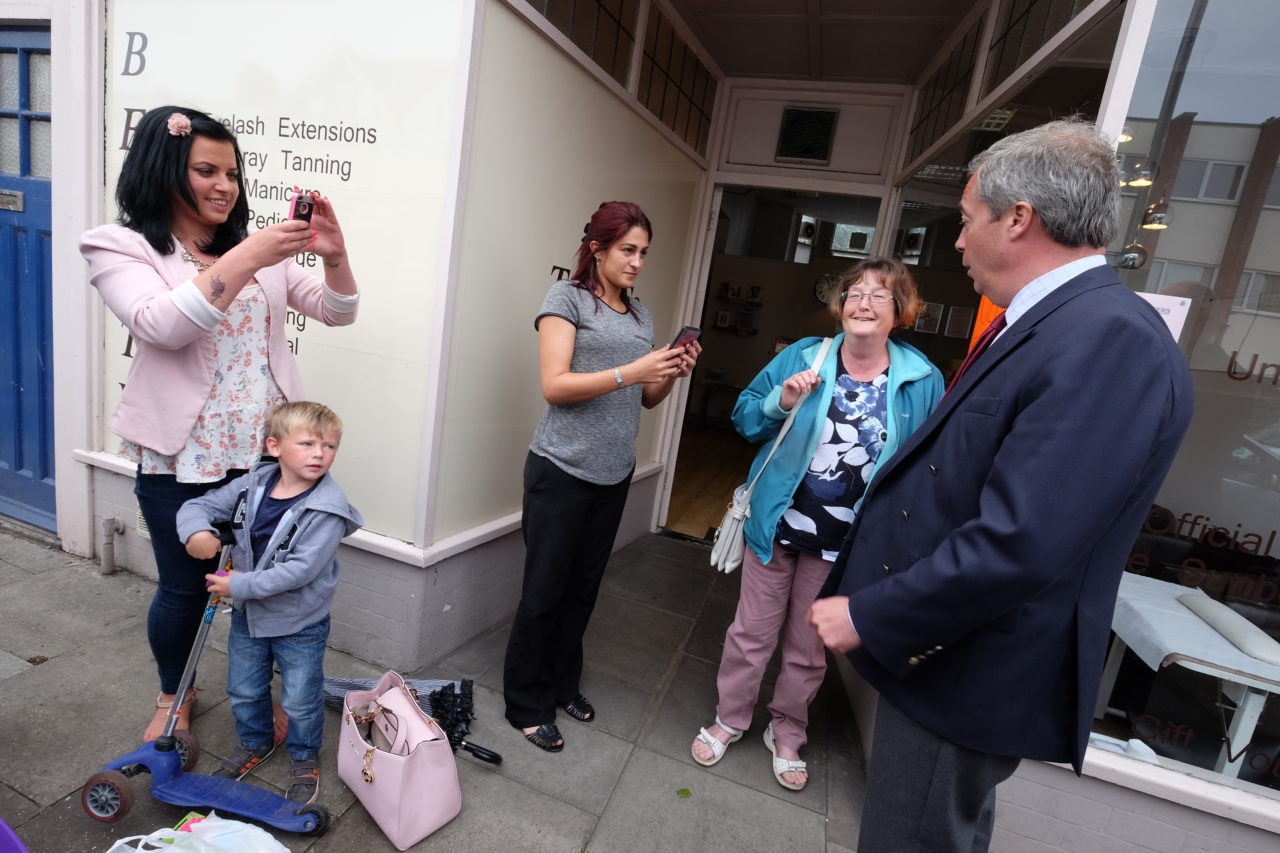 Chatting with the beauty parlour gals

But the best response was in Sittingbourne, where once again (unto the breach) the UKIP bus blasted out the theme from the Great Escape as it trundled over the cobbled high street.

In the crowd of scores of supporters, there was just one person openly against leaving the European Union. She said it was because of “women’s rights and human rights”. Breitbart London noted that she seemed to be the one person that the Times journalist who was also present insisted on speaking to at length.

“You tell ’em, Nigel!” screamed one woman, as throngs of supporters young and old lunged for selfies. One woman even asked him to sign her arm.

And a group of young, black students found themselves face-to-face with Farage, having been reticent to make contact, discussing in amongst themselves whether he was a “racist” or not.

“You know what Nige! Nige! You know what? You’re a decent guy,” said one boy, clutching his “We Want Our Country Back” poster, just after Nigel had signed it. 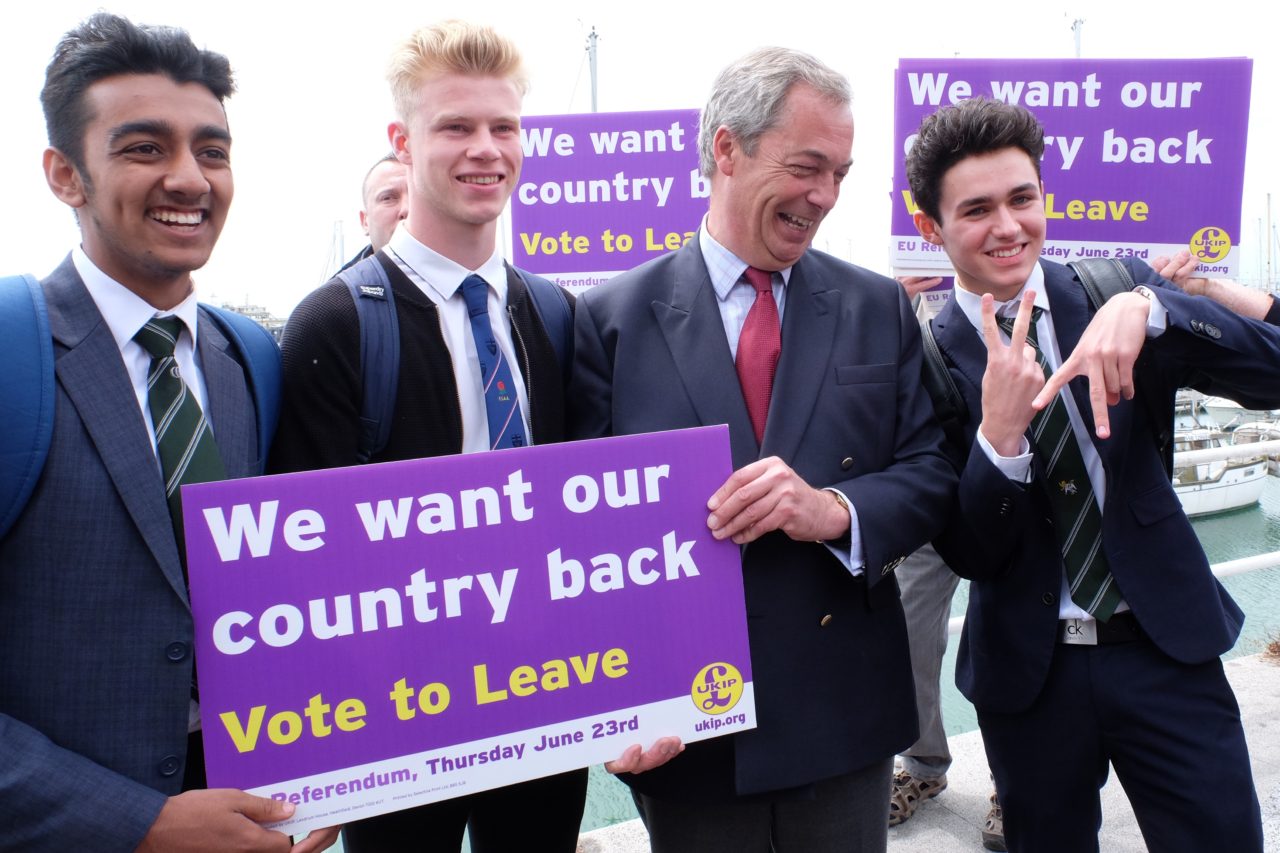 And for those concerned, Nigel also looks refreshed, reinvigorated, and ready to take the fight to the establishment over the closing week of the campaign. 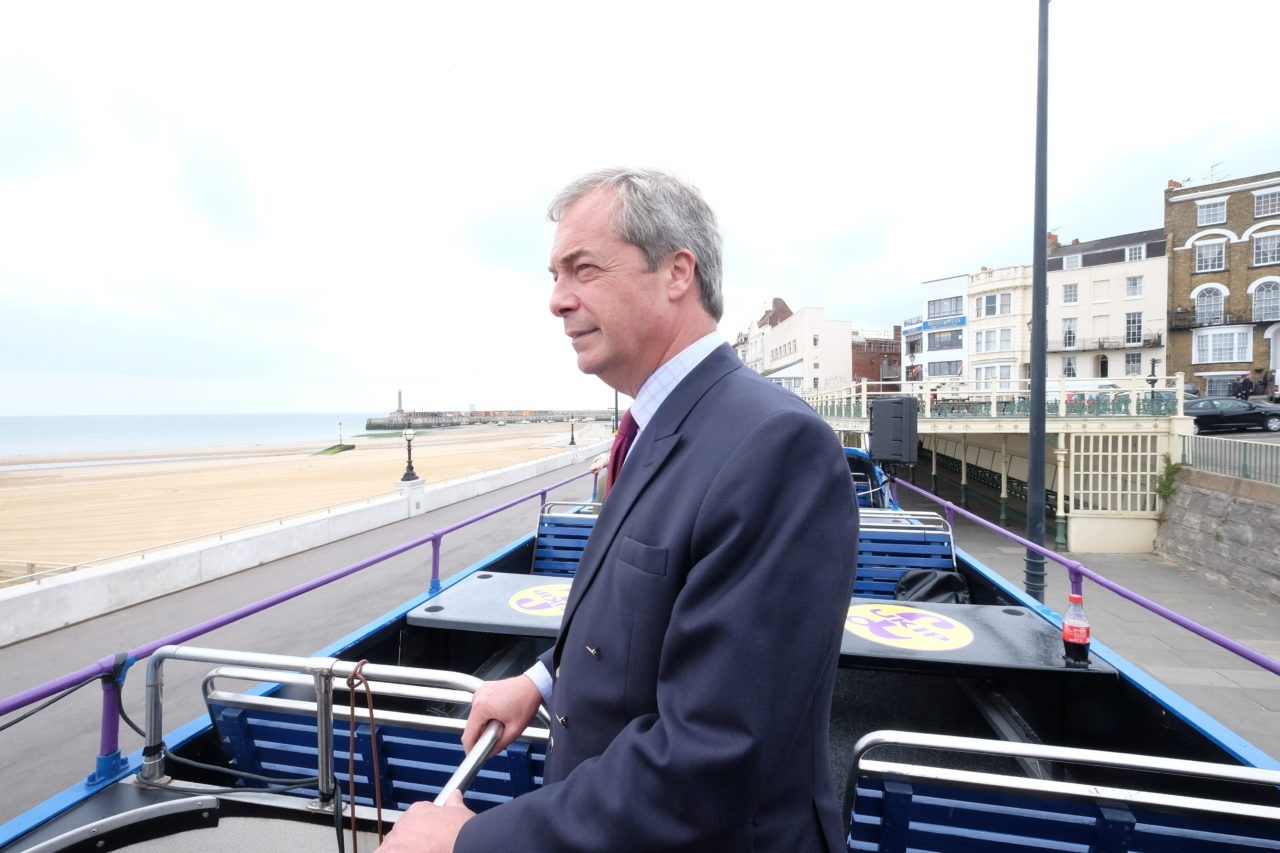 “He looks really well,” one of his aides told me on Saturday afternoon. “I really think we can do this,” he told me.

But of course it is still all to play for, and some things can still go wrong.

The trip was slightly marred when panicked press officers heard about a new graphic from the Farage-backed Leave.EU campaign.

“Islamist extremism is a real threat to our way of life,” the social-media graphic read, alluding to the Orlando terror attacks. “Act now before we see an Orlando-style atrocity here before too long” it concluded. 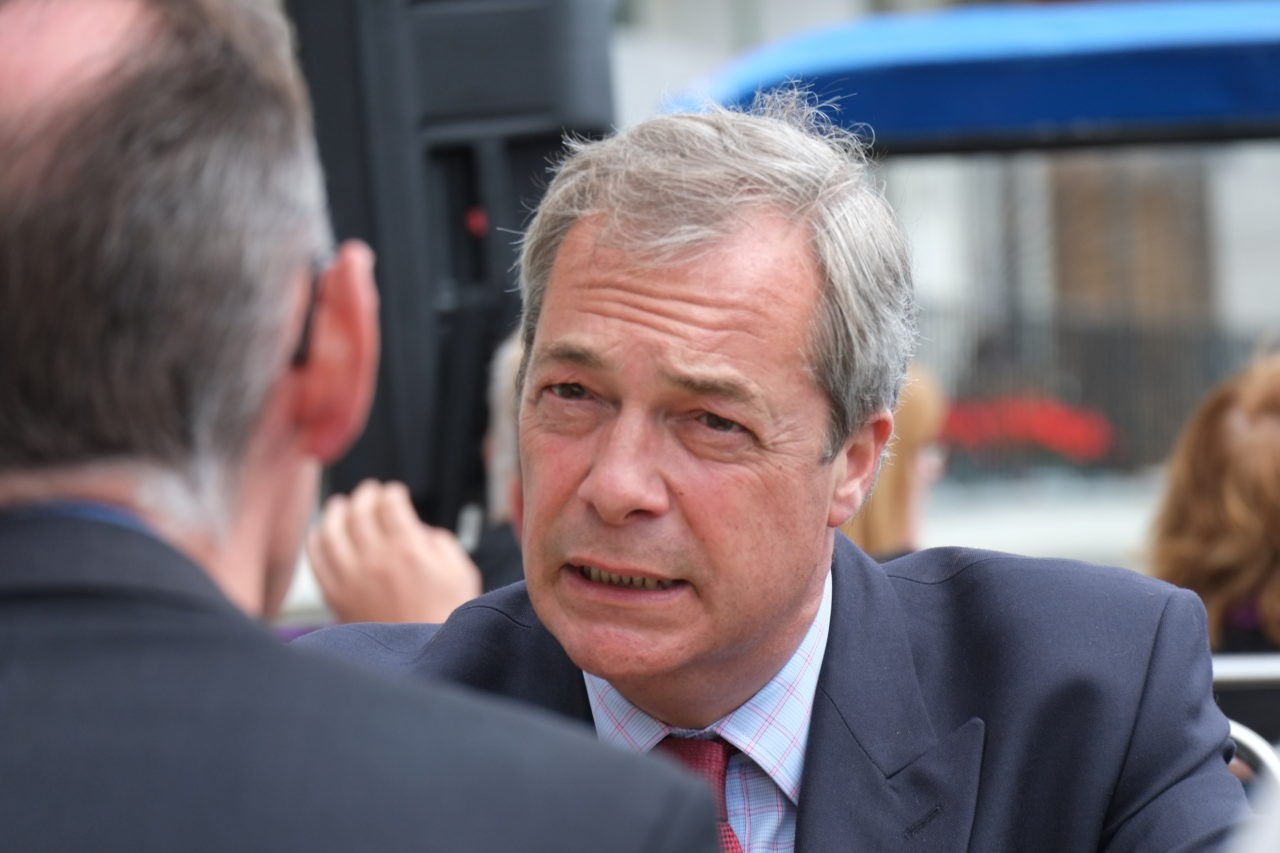 Talking to journalists on top of the Battle Bus

Personally, I saw no problem with the graphic. Those complaining about it were members of the liberal-left media establishment, and throngs of Twitter-obsessed ‘Remain’ campaigners. Nigel and his team, however, distanced himself from Leave.EU. He told the Wall Street Journal and the Times that he supports every Leave group, not specifically Leave.EU.

Whatever you think of the graphic, or rather, the speed at which is was released: the facts are not changed. European Union membership does increase the likelihood of Islamist-inspired terror in the United Kingdom and across Europe. We know Islamists are using Europe’s open borders and Schengen Agreement to travel freely across the continent. Britain remaining in the EU will arguably lead to further integration, perhaps even membership of Schengen and the Euro.

But it was a point that neither Farage, nor the Leave.EU campaign leaders who I spoke to yesterday, seemed keen to make. Instead, Leave.EU removed the graphic and blamed it on an office junior.

These sorts of incidents could hurt the campaign – albeit in a miniscule way – over the next week. But not because of the message. More because they are reluctant to stand by the absolute, hard, and uncomfortable facts surrounding security and terrorism. 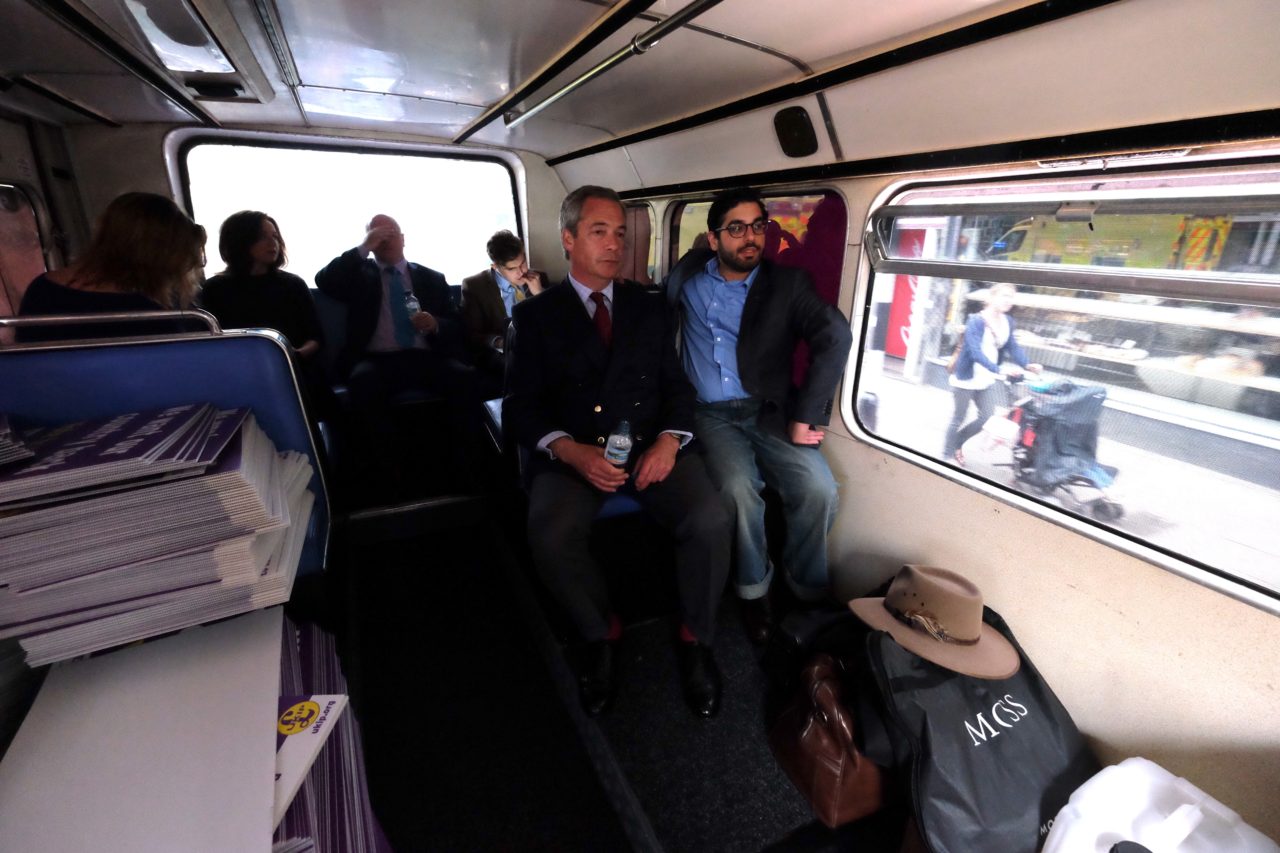 But what was abundantly clear yesterday is that members of the public of all backgrounds, races, religions, and ethnicities are voting to Leave.

Remain campaign assertions, as well as media suggestions that the Leave campaign is constituted solely of old, white, angry men is not played out on the streets of Britain.

And it’s not a idea borne out by the polling either.

And that was evident in Ramsgate from the moment of arrival, when taxi driver Enes, from Turkey, told me he was desperate for Britain to Leave the failing European Union. 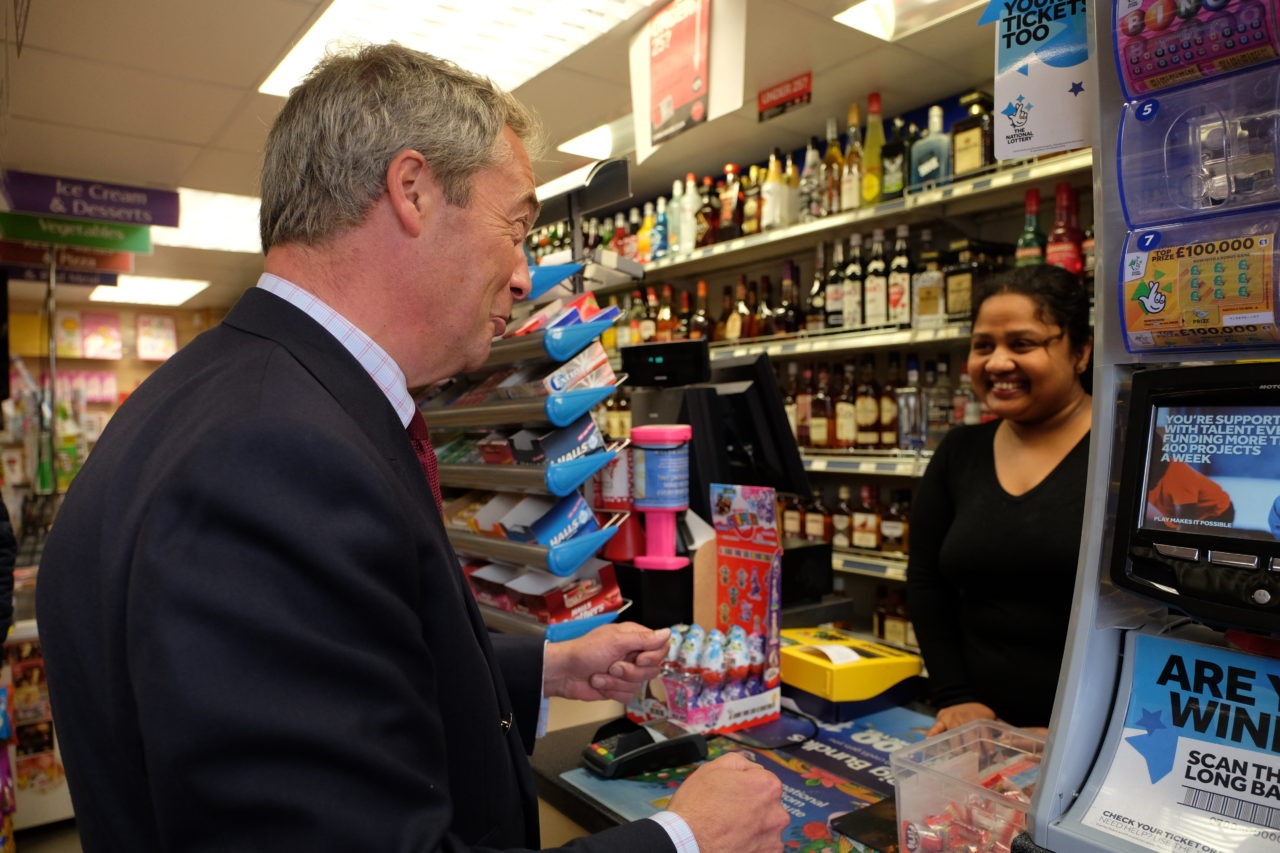 He cited concerns over immigration – not the cultural problems, but primarily the sheer numbers coming into Britain – as his reason for leaving.

So when people say, “It’s all to play for” right now – that’s not entirely true. The Leave campaign has the Farage momentum (Fomentum?) – but it now needs to ramp up the pressure on the Prime Minister and the ‘Remain’ establishment, as voters are, as we know from experience, more likely to vote for the status quo on the day.

So once more unto the breach…

P.S. Farage isn’t the technophobe he’s portrayed as! Here he is using an iPad with some competency. 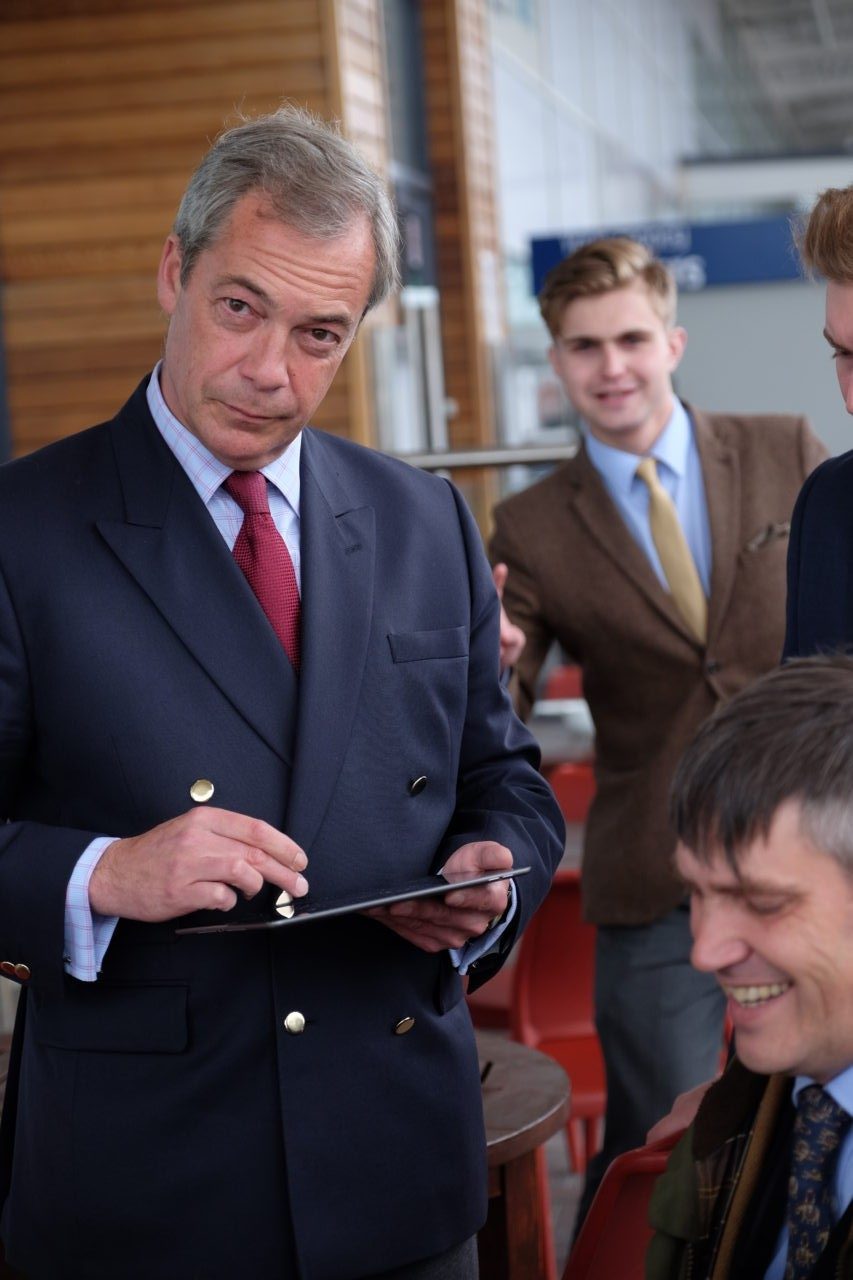