With over 99 per cent of the vote counted, the party of the populist Czech billionaire described by some as the ‘Czech Trump’ has achieved a considerable victory in the national legislative elections — with the mainstream left Social Democrat party achieving their worst result in national history.

With an estimated fortune of over four billion, ANO [YES] party leader Andrej Babis is even wealthier than U.S. president Donald Trump, and has used his wealth since the 2011 founding of his party in a crusade to change Czech politics. Originally founded to oppose government corruption, the party has since come to oppose the Euro currency, European Union federalism, and mass migration.

Businessman Babis was finance minister of the Czech Republic from January 2014 to May 2017, but this election could see him returned as the leader of the largest party and not needing the support of the Social Democrat party he served under.

The count for this remarkable election is now all but complete, with Czech billionaire and populist leader Andrej Babis leading a party commanding 29.66 per cent of the vote — a significant proportion given the largest party in the last election in 2013 only achieved 20.45 per cent of the vote.

That same Social Democrat party — known as the orange party in Czechia for their corporate colour scheme — has this time recorded their worst ever result, reports Czech newspaper Lidovky, at just 7.7 per cent, putting them in sixth.

Ahead now of that former giant of Czech politics are the liberal-conservative Civic Democratic Party in second with 11.31 per cent. Behind them in third are the left-liberal Pirate Party at 10.78 per cent, and the anti-Islamification, anti-mass migration and Eurosceptic Freedom and Direct Democracy party, who have achieved above expectations to come fourth with 10.64 per cent.

The Czech Statistics Office said ANO has received around 30 per cent of the vote after ballots from 80 perc ent of the polling stations have been counted.

The Czech Republic’s most radical anti-Islam, anti-migration, anti-EU party, Freedom and Direct Democracy, is in second with 11 percent of the vote so far. If this figure is confirmed it would put the anti mass-migration party well ahead of recent polls which have put them consistently below the 10 per cent mark, and at times even lower than five per cent.

Trailing in third are the Communists, with 9.5 percent of the vote.

Coalition talks between potential partners are expected to take weeks, with Czech president Milos Zeman having said he was going to give MPs a month to talk before calling a new parliament. Zeman has said the fact Babis has been investigated by police for financial irregularities wouldn’t prevent him from asking the billionaire to form a government. 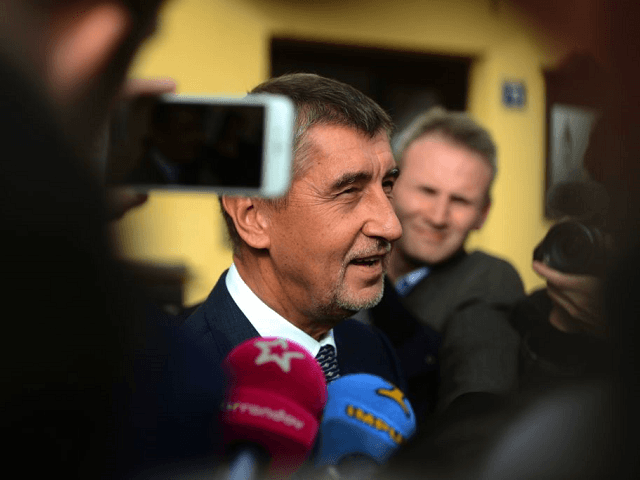 Even after the major victory of right-wing Sebastian Kurz and the strong performance of the Freedom Party in Austria in their recent elections, a Babis ANO — Freedom and Direct Democracy coalition could see Czechia take the crown for the most significant shift to the right in Europe for 2017.

As reported by Breitbart London in June, Babis articulated his anti-mass migration views, and opposition to the forced relocation of migrants by the European Union. Speaking on the importance of national heritage, Babis said: “The biggest added value of the European Union is the national identity of each country.

“We have to fight for what our ancestors built here. If there will be more Muslims than Belgians in Brussels, that’s their problem. I don’t want that here. They won’t be telling us who should live here.”

The latest results also show a remarkable collapse for the previously ruling Social Democrat party, who have slumped to just seven per cent of the vote — behind even the Pirate Party, who are now in double digits.