BELGRADE, Serbia (AP) — Marina Stevanov never doubted she would leave her native Serbia as soon as she earned her medical degree with top grades.

Now, the 25-year-old doctor is packing her diploma, thick medicine books and a German language dictionary for a move to Austria, where an elite hospital offered her a job that will train her to specialize in vascular surgery.

She doesn’t plan to return any time soon.

Rampant unemployment, low wages, corruption and a lack of opportunity to advance careers are driving thousands of young and educated adults to emigrate from Europe’s Balkan nations.

As fresh talent decamps for Western Europe, the United States or oil-rich Persian Gulf countries, the massive brain drain puts their struggling countries on even more uneven footing, with populations increasingly made up of people less educated or elderly.

Bosnia ranked 135th out of 137 countries for “capacity to retain talent” in the World Economic Forum’s 2017-2018 Global Competitiveness Report. Serbia placed 134th and Croatia at 131st.

“My colleagues who are working here are really upset. They are not satisfied,” Stevanov said in her small Belgrade apartment crammed with packed boxes and suitcases. “You don’t have enough time or money for your family and normal life, that’s a big problem.” 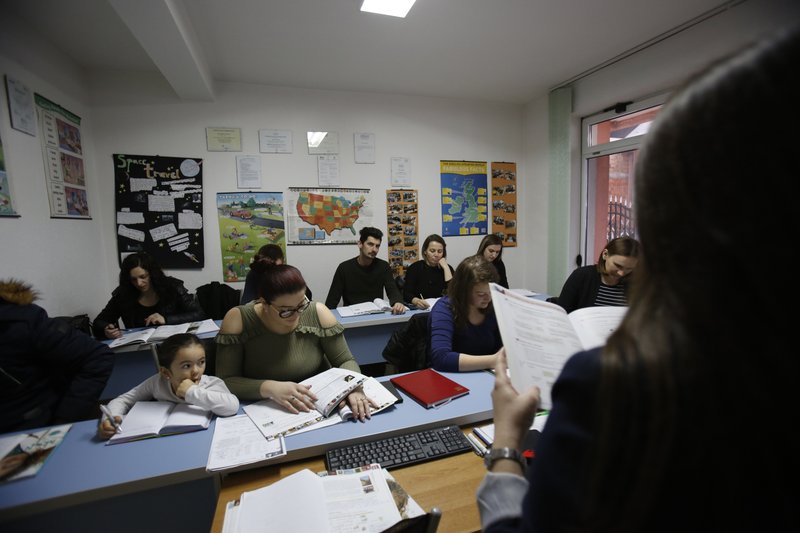 In this photo taken Tuesday Feb. 6, 2018, Bosnian people attend a German language class in Kalesija, Bosnia. Bosnia, which suffered a bloody civil war in the 1990s, has the world’s highest rate of youth unemployment hovering at some 65 percent, forcing young and old alike, to look elsewhere for work. (AP Photo/Amel Emric)

The number of doctors and nurses in Serbia has steadily declined, prompting fears that the already strained health system might collapse. Salaries for young doctors in public hospitals average around 600 euros ($750) a month. Those are the physicians with the luck and connections to land paid jobs in the first place.

In 2007, 27,000 educated people emigrated from Serbia. Only seven years later, this number more than doubled to 58,000, according to the last available official data. The exact numbers are certainly much higher as most of those who emigrate don’t report it to authorities.

Serbia, where mechanical engineers and IT experts are among the 50,000 unemployed university graduates, has done little to stop the outflow except for making occasional appeals for patriotism.

“I’m begging you to stay in our beautiful Serbia,” the country’s President Aleksandar Vucic said last week while handing out scholarships to top students.

In neighboring Croatia, the youth unemployment rate has averaged 35 percent over the past decade. But young people with the motivation and means have more options since Croatia joined the European Union in 2013; its citizens can apply for jobs in other EU countries without needing visas or work permits.

Official government statistics say some 40,000 Croats have left the country every year since Croatia entered the EU. Zagreb University demography Professor Stjepan Sterc estimates the number is more than double that, with most of them young people.

“Something has to be done to stop this emptying of Croatia,” Sterc said. “It’s in the strategic interest of the country.”

Bosnia, the site of a bloody civil war during the 1990s, has a whopping youth unemployment rate hovering at some 54 percent, according to the World Bank figures, forcing young and old alike, to look elsewhere for work. The figure covers those up to 24 years old.

The agency secured employment for close to 3,500 people in Germany and nearly 20,000 in Slovenia during the past five years. It is not helping find jobs outside Bosnia for doctors or other professionals in shortage occupations.

“In this time and age, everyone can find job ads in any country online and apply or seek employment abroad through a privately owned agency,” spokesman Boris Pupic said.

One such is Alphabet InfoCenter, based in the impoverished northern Bosnian city of Tuzla. Along with linking job seekers with potential employers, Alphabet organizes German and English lessons, provides interpreters to help with paperwork, and works with successful applicants to arrange their stays abroad.

Mersudin Mahmutbegovic, the center’s head, said the government in Bosnia has done nothing to retain professionals or to create more jobs by addressing a mismatch between graduates and jobs available on the labor market.

“They complain that there will be no one left to, for example, take care of patients in Bosnia, but it never occurs to them that they should do something to encourage people to stay,” Mahmutbegovic said.

Redzic, who is fluent in German and English, obtained her law degree five years ago and immediately applied for jobs all over Bosnia. She received hardly any responses and thinks the whole process was just for show, echoing the prevailing belief that good connections matters more than a good resume.

Exasperated, Redzic decided to train to be a nurse and look for work in Germany. Once she leaves, she has no intention of returning.

“I would never return other than for a short visit to see my family,” she said. “I want to live in a society that appreciates my hard work and effort.”