Citizen journalist, anti-Islam campaigner, and free speech activist Tommy Robinson is the latest personality to have been suspended by Twitter.

The account of the former English Defence League (EDL) leader went dark overnight into Wednesday, with a holding page now informing visitors the account has been suspended. 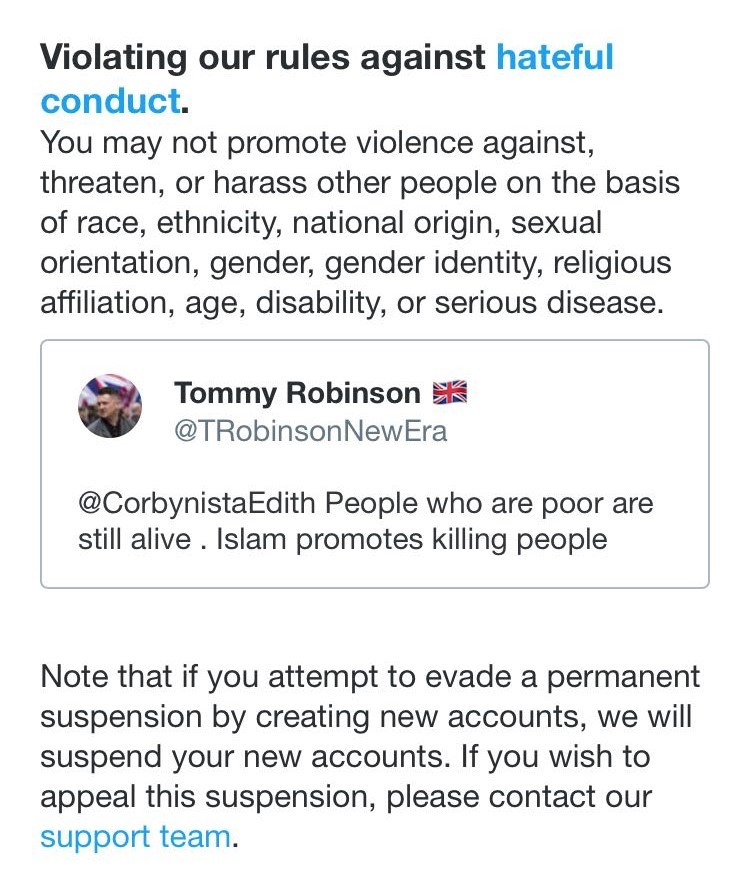 The Quran — the holy book of Islam — is clear about its endorsement of violence and murder for apostates and unbelievers, such as Sura 9 Verse 5: “…kill the polytheists wherever you find them and capture them and besiege them and sit in wait for them at every place of ambush. But if they should repent, establish prayer, and give zakah, let them [go] on their way. Indeed, Allah is Forgiving and Merciful”.

Twitter’s ban of Robinson for pointing this out may therefore be construed as an attack not just on speech, but a revisionist assault on history, truth, and fact.

Robinson’s account was previously stripped of its verified ‘Blue Tick’ symbol during a crack-down in which they noted: “verification has long been perceived as an endorsement [by Twitter]” and said accounts “whose behaviour does not fall within these new guidelines” would be stripped.

The suspension comes just weeks after Robinson was banned from posting to Twitter for seven days for reproducing the findings of the counter-extremism Quilliam think-tank from a study on child sex exploitation gangs. Quoting the study which stated that 84 per cent of convicted child sex gang groomers in the UK were Muslim, the platform declared that Robinson had “violated the Twitter rules” for stating fact.

Robinson told Breitbart London exclusively on Wednesday: “I saw this coming. They’ve been building up to it for some time. It’s coming from politicians who have been threatening social media firms, and telling them who they want on their platforms and who they don’t.

Robinson made explicit reference to London Mayor Sadiq Khan, who recently travelled to Austin, Texas, to threaten social media firms for allowing opinions contrary to his on their platform.

Robinson hinted at hosting another free speech rally, this time outside the London offices of Twitter.

As part of the ongoing campaign for the return of free speech in the United Kingdom, Robinson addressed a crowd at Hyde Park less than two weeks before his Twitter ban, delivering a speech written by Austrian Identitarian Martin Sellner, who himself was banned from entering the United Kingdom to deliver the speech in early March. Detained at Heathrow, Sellner was later deported with his American girlfriend Brittany Pettibone.

Speaking to Breitbart London at the rally at Speaker’s Corner, Hyde Park — a traditional home for free speech in the United Kingdom — Robinson said: “The true battle for free speech started today. This is just the start.”

Just days before the rally, Robinson had been escorted by police away from Speaker’s Corner, claiming the officers had told him that he would not be allowed to speak.