An Iraqi Kurdish migrant who used his shop to “seduce” two young girls before sexually abusing them has been sentenced to 12 years’ imprisonment and faces deportation.

Dilan Amin, 28, described as a “failed asylum seeker” by sentencing Judge Jonathan Bennett at Derby Crown Court, was given 12 years with a further four years on an extended licence for the protection of the public, reports DerbyshireLive.

The Iraqi, who ran the Famous Shop on Pear Tree Road in Normanton, Derby, had pleaded guilty to two counts of sexual activity with a child. One count related to the sexual abuse that took place between November 1, 2012, and October 31, 2013, when the victim was aged 12 to 13.

The other count relates to abuse against a 15-year-old occurring between December 6th and 9th, 2016.

Amin, who came to Britain ten years ago, had also been found guilty of two counts of sexual assault against two women.

At a previous trial he was found guilty of another sexual assault, inciting a person to prostitution, and robbery.

The investigations against the failed asylum seeker began following his arrest in January 2017 following reports of child sexual exploitation (CSE) against seven victims aged 12 to 17. 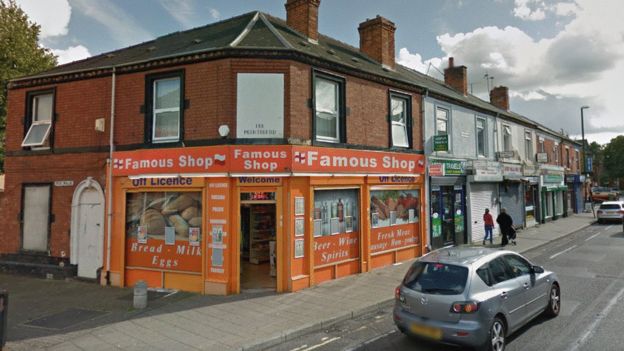 “We’re all aware of other high-profile child sexual exploitation investigations. It was there in the back of my mind. We spoke to one girl who mentioned multiple victims and our investigation took us to them,” he added.

Barrister Ian West described to the court how Amin would supply girls with drugs in return for sexual favours, and used his shop to seduce vulnerable girls.

Judge Bennett told the court that many suspected victims were reluctant to come to court to give evidence.

“You are a dangerous offender to young vulnerable girls,” Judge Bennett told Amin.

“You are a sexual predator. You had complete contempt for these girls. You did this over a lengthy time for about four years. You groomed them,” he said.

This is the second trial to run in relation to the two young victims, then aged 12 to 13 and 15.

The migrant had denied the string of charges, claiming that he was a devout Muslim who goes to the mosque and prays five times a day.

The jury in the first trial did not return a verdict, and the Crown Prosecution Service (CPS) decided to run a second trial, with Crown Prosecutor Rebecca Edwards telling the court: “This decision included a careful balance of the needs of each complainant and consideration of the risk he posed to other children and vulnerable young people.”

Four Afghans, including one asylum seeker, have been found guilty of gang raping a lost 16-year-old girl in Kent. https://t.co/FRmV6m3qAj

It was in April 2018, during this second trial, that he admitted to two counts sexual activity with a child and two counts of sexual assault against two other women.

Defence barrister Tony Stanford said that because of the threat of deportation when he comes out of prison “there is no light at the end of the tunnel” for Amin.

One victim told the court that Amin has “no soul” and the other said she suffers from nightmares and feels “isolated, lonely, and ashamed” because of what happened to her.