Three people were injured, two seriously enough to be taken to hospital, after they were struck by a car following an altercation outside a mosque in northwest London in the early hours of Wednesday morning.

London’s Metropolitan Police launched an appeal Wednesday morning after the incident, which the force said took place after a disagreement between the occupants of the vehicle and a “large group” of people outside the Al-Majlis Al-Hussaini Muslim Community Centre in Cricklewood. 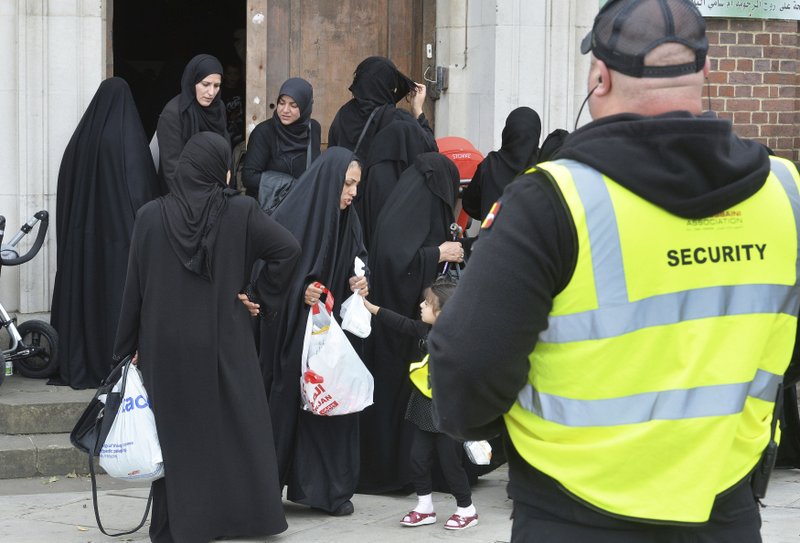 Women and children with heightened security outside The Hussaini Association in the Cricklewood area of London, where two people were injured after a car hit pedestrians leaving the annual Al Hussaini Majlis shortly after midnight Wednesday Sept. 19, 2018 / John Stillwell/PA via AP

The force said the community centre became aware of a group of individuals inside a car parked at the building’s private car park a little after midnight who were “behaving anti-socially, drinking and allegedly using drugs”. After asking the individuals, described as being in their mid-20s, to leave, a confrontation took place between the occupants and “a large group of people visiting the centre”.

After “words were exchanged and comments of an Islamophobic nature were allegedly made by the group in the car”, the vehicle “sustained minor damage” by the pedestrians at which point it sped off, striking three people.

Of those injured, a man in his 50s remains in hospital with a serious leg injury.

The vehicle did not stop despite having been involved in a collision, and no arrests have yet been made. Police say they are not treating the incident as terror-related, but are investigating whether a hate crime may have taken place.

Police are appealing for witnesses or those with information to come forward, and for victims of hate crime to report incidents to them.

This is a very sad and tragic event. There is no room for hate.

Brent is the most diverse constituency in the UK and our diversity is our strength. https://t.co/qIwNmb2OzR

London’s LBC reports the statement of a spokesman for the Al-Hussaini Muslim Community Centre, who said of the incident: “As the attending patrons were leaving, the suspect vehicle turned onto Oxgate Lane from a side road and sped down heading towards the Edgware Road junction. It swerved into innocent people hitting at least five people of which three were seriously injured.

“It is known that the driver a male and three passengers, two males and a female, were of Caucasian origin. They were heard shouting anti-Islamic taunts at the crowd before they started their attack.”

Although police have said they do not believe the incident was terror-related, comparisons have inevitably been drawn on social media to the 2017 Finsbury Park Mosque attack, in which Wales resident Darren Osborne drove a hired van into a crowd standing outside the building in an attempt to kill. One man who had already collapsed due to ill health before the attack took place subsequently died, and Osborne was jailed for life in 2018.