A child of Cuban refugees, who joined hundreds outside the White House on Saturday to demand President Joe Biden aid protesters in the island nation, told Breitbart News that those taking to the streets are enduring “unbearable” oppression.

“The Cuban people, we’re tired, they’re tired of the communist left, the suppression. The oppression that they have is unbearable, and nobody understands more than like the Cuban people, and that is why we fight so hard so that we don’t have communism into this country [sic],” the woman, Barbara, told Breitbart News. Barbara explained that her parents fled Cuba and, while she is an American, she felt the need to join the protests to support those in Cuba.

Barbara posed the question that, “if communism is so great, wouldn’t it sustain itself?” Many left-wing supporters of the communist Castro regime argue Cuba’s woes are due to the United States “embargo” against the island, which does not prohibit all travel there nor limit medical and other humanitarian aid. Cuba is also free to trade with the rest of the world, including economic superpowers like China and the European Union.

“If you see this many people that have risked their lives coming to this country, doesn’t matter of their color, they’re black, they’re white, they’re mixed — every color of the rainbow — you have them in Cuba, and they’re fighting for one thing… freedom and no more communism,” she added.

“[The protests] you can’t do in Cuba,” she said of both the protests erupting this week in Cuba and the massive peaceful assembly in front of the White House. Since Fidel Castro died in 2016, the Castro family continues to control the island through its domination of the military. President Miguel Díaz-Canel, the figurehead of the Castro family regime, called for civilians to violently attack protesters on the streets in an “order of combat” issued late Sunday.

Since the beginning of protests on the island, video of both uniformed and plain-clothed officers beating and opening fire on unarmed protesters has surfaced. As of Sunday, independent media in Cuba confirmed there had been at least 5,000 arrests, Breitbart News reported.

Barbara said that if it were “great,” Cuba would be the “perfect paradise to live in.” She noted there have been so many families that have sacrificed their lives and the lives of their children taking rafts and other homemade vessels across the Straits of Florida to freedom in the U.S. 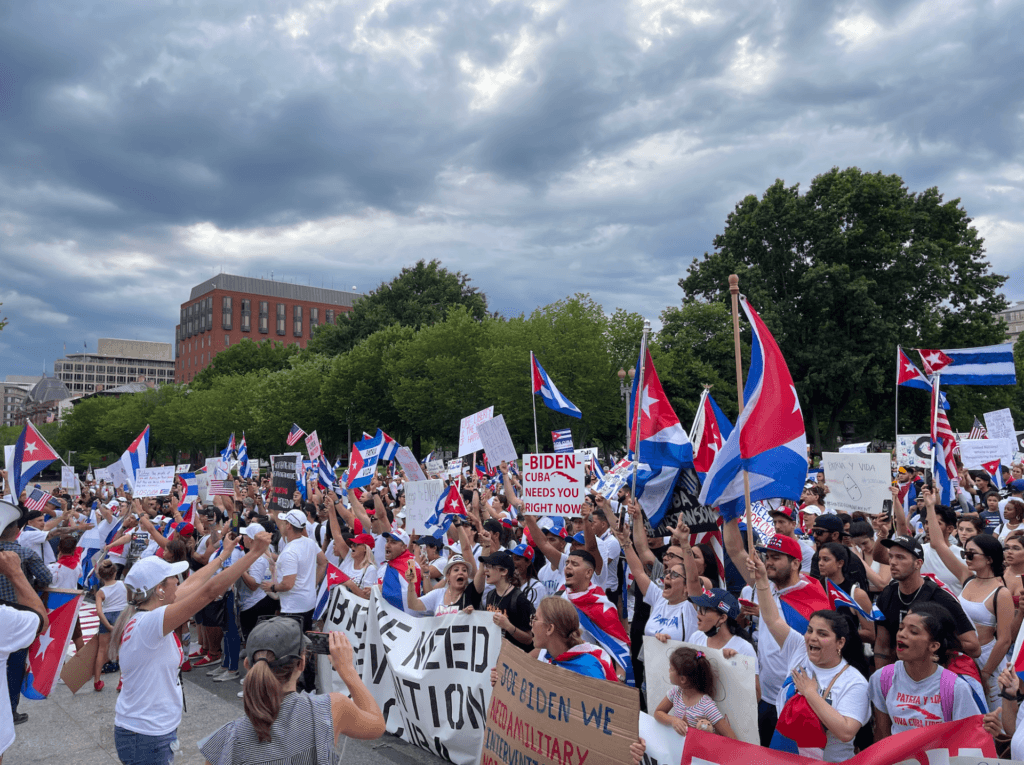 “The flag that [the protestors] are lifting is the American Flag. No other [county’s] flag you see there. The Chinese flag’s not there,” she noted “The Venezuela flag is there searching for the same thing as us, freedom. You don’t see the Russian flag, no other flag but the United States flag, the Cuban flag, and the other countries looking for the same exact thing we want: Freedom for our people.”