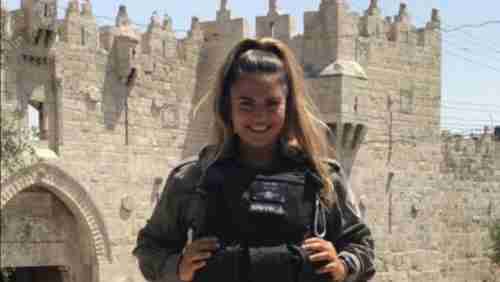 At one location, two Palestinians were shot dead after opening fire at a group of Israeli police officers. One Israeli officer was injured.

At the second location, a Palestinian fatally stabbed Hadas Malka, a 23-year-old Border Police officer. Malka is being called a hero because she fought back against the attacker as he was repeatedly stabbing her. She died during emergency surgery. The attacker was shot dead.

For several months during 2015, these knife attacks by Palestinian teenagers on Israelis were becoming fairly common. Israeli security officials were baffled about how to prevent the knife attacks because, unlike suicide bomber vests, a knife can easily and openly be carried from place to place and wielded at a moment’s notice. It was feared that the number of attacks would grow. However, by the end of the year, it appeared that that the teenage knife attacks had run their course, despite encouragement from Hamas that they be continued.

The teenagers are in what is being called the “Oslo generation,” because they grew up after the 1993 Oslo accords that were supposed to bring peace to the Mideast. Instead, the Oslo accords are perceived as having accomplished nothing, and that perception is completely correct. The Oslo generation see the so-called “Mideast peace process” as nothing more than a failed series of humiliations for Palestinians.

The result is that the youngest generations of Palestinians are pretty much disgusted with all the Palestinian leadership, in both the West Bank and Gaza. Like the youngest generations in many countries today, the Oslo generation are looking forward to replacing their current incompetent leadership with new, young, energetic leadership that will take them to war against Israel, and lead to atrocities, mass killing, rape and torture of both Palestinians and Israelis, and a region soaked with blood. Times of Israel and Reuters and Times of Israel

Hamas, ISIS argue over who gets credit for killing female Israeli officer

In a series of bizarre twists, different terrorist groups are competing for the honor of taking credit for killing Hadas Malka.

First off, the so-called Islamic State (IS or ISIS or ISIL or Daesh) took responsibility for the stabbing and shooting attacks on Friday evening. According to a statement from its Amaq PR agency:

Let the Jews expect the demise of their entity at the hands of the Caliphate soldiers. [The attack is] revenge for God’s religion and for the violated sanctities of Muslims.

ISIS, which is close to being defeated in Raqqa in Syria and in Mosul in Iraq, is increasingly taking credit for terrorist acts it had nothing to do with in order to try to improve the value of its brand name in view of its approaching defeat.

Hamas, the government authority in Gaza, was quick to call say that ISIS are liars and that Hamas should get the credit, because all of the teenage attackers were Hamas members. According to a Hamas official:

The three hero martyrs who executed the Jerusalem operation have no connection to Daesh (ISIS), they are affiliated with the PFLP and Hamas.

The acronym PFLP stands for the Popular Front for the Liberation of Palestine, a long-in-the-tooth terrorist organization formed after the 1967 war between Israel and Egypt, currently a branch of the Palestinian Authority in the West Bank.

The PFLP posted an interesting statement on their website:

The Popular Front for the Liberation of Palestine praised the heroic operation in Jerusalem on Friday evening that led to the killing of one armed occupation Border Police officer and wounding of several more armed occupation forces, saying that this operation comes at a critical time to defend Palestinian resistance.

The Front saluted the martyrs whose lives were taken in the operation as heroes of the Palestinian people who acted to defend the rights of the Palestinian people with unrivaled courage, penetrating Zionist control over Jerusalem to direct the fire of their anger at the occupation’s armed forces and soldiers. The Front emphasized that the resistance is continued, rooted in the homeland and in Jerusalem, the eternal capital of Palestine.

The PFLP also noted that this operation sends a strong, direct message to the defeated leaders of the Palestinian Authority, its polices and approach, that makes clear that the resistance is continuing and is the only path to defeat the occupier. The operation was carried out only meters from the al-Buraq Wall, confirming the Arab identity of Jerusalem. A attempt to undermine Palestinian and Arab rights to their holy sites and to Jerusalem will face strong and firm rebuke.

What’s most interesting about the PFLP statement is that it refers to “the defeated leaders of the Palestinian Authority,” referring especially to Mahmoud Abbas.

All of these statements are pure public relations statements. The purpose of the ISIS statement is to improve its brand name before its defeat in Syria and Iraq. The Hamas and PFLP statements are both targeted at the young Oslo Generation who, polls show, are completely disgusted with all of the leaders of the traditional Palestinian groups – the Palestinian Authority, the PFLP, and Hamas. Each group is hoping that they can feel the love from the generation of Palestinian kids, but that’s not going to happen.

Mahmoud Abbas, head of the Palestinian Authority, put out a statement condemning Israel for killing three teenage Palestinians who killed Israeli police officer Hadas Malka and injured four others. Abbas called their deaths a “war crime.” This is completely laughable, but like many politicians’ laughable statements, it’s just another public relations statement to appeal to the children in the Oslo generation who, as polls have shown, generally hate Mahmoud Abbas.

Israel’s military, the IDF, said that two of the attackers known to be affiliated with a local cell and not working for either ISIS or Hamas. They were imprisoned in Israel in the past for rock and firebomb attacks. So it turns out that all these terrorist leaders were just ordinary politicians lying to their constituents.

As I’ve written many times, Generational Dynamics predicts that the Mideast is headed for a major regional war, pitting Sunnis versus Shias, Jews versus Arabs, and various ethnic groups against each other. Generational Dynamics predicts that in the approaching Clash of Civilizations world war, the “axis” of China, Pakistan and the Sunni Muslim countries will be pitted against the “allies,” the US, India, Russia and Iran. Times of Israel and Yeshiva World News and YNet News and AP