More than 90 percent of establishment media coverage is hostile towards President Donald Trump’s immigration policies, says a report by the Media Research Center.

“The negative tone is a consequence of journalists’ decision to frame nearly all of their coverage around the plight of those adversely affected by the administration’s enforcement program, rather than those harmed by illegal immigration or those who support enforcing existing law,” MRC said. 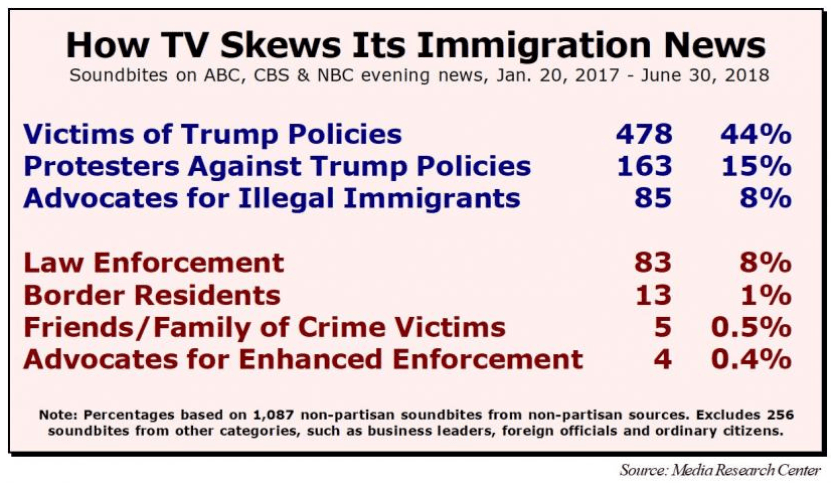 During the 18 months of the Trump presidency, immigration has received more airtime on the three broadcast evening news shows than any other policy topic. The networks’ coverage has been relentlessly hostile to the administration (92% negative, just 8% positive), largely because these newscasts have framed nearly all of their coverage around the plight of those adversely affected by the administration’s enforcement agenda, and have virtually ignored law enforcement or anyone harmed by illegal immigration …

Lopsided as it is, the networks’ preference for soundbites from Trump’s victims doesn’t fully account for the 92% negative news on this topic. Reporters and anchors themselves amplified the messages of “fear,” “dread,” and even “terror” among those barred from entering the U.S. or facing deportation.

On the February 11, 2017 NBC Nightly News, as the lax Obama-era policies were replaced, correspondent Gabe Gutierrez said: “families of undocumented immigrants say they’re now living in fear….An immigration attorney in Atlanta, says there is a sense of panic among her clients.” On March 3, then-CBS Evening News anchor Scott Pelley warned: “There is a growing sense of dread among immigrants in America.”