Brooklyn Nets star Kyrie Irving attended the team’s media day at Barclays Center on Monday virtually, as he remains unvaccinated and not in compliance with the NBA’s and New York City’s coronavirus restrictions.

Irving will travel with the team to San Diego this month to face the Spurs, ESPN reported.

Irving is unhappy that the city of New York recently passed a rule requiring New York-based athletes to show proof of at least one dose of the coronavirus vaccine to be allowed to enter an arena.

“Honestly, I’d like to keep that stuff private,” Irving told the assembled media via SNY. “I’m a human being first. Obviously, living in this public sphere, it’s just a lot of questions about what’s going on in the world of Kyrie. And I think I just would love to just keep that private, handle it the right way with my team and go forward together with the plan.

“Obviously, I’m not able to be present there today. But that doesn’t mean that I’m putting any limits on the future of me being able to join the team. And I just want to keep it that way, so we can keep that private. But if anyone has any further questions about that, it’ll be the same response. I would like to keep that private, and just please respect that — my privacy.” 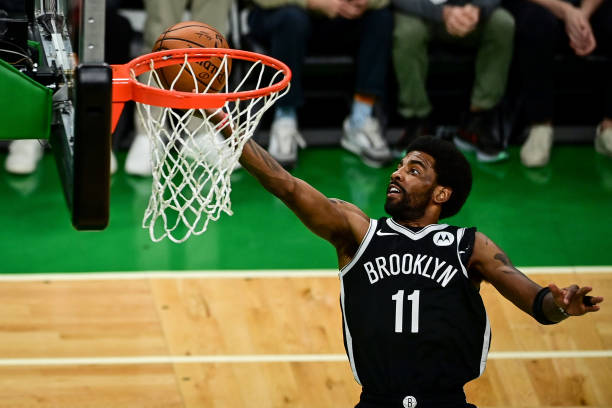 BOSTON, MASSACHUSETTS – MAY 30: Kyrie Irving #11 of the Brooklyn Nets drives to the basket against the Boston Celtics during Game Four of the Eastern Conference first round series at TD Garden on May 30, 2021 in Boston, Massachusetts. NOTE TO USER: User expressly acknowledges and agrees that, by downloading and or using this photograph, User is consenting to the terms and conditions of the Getty Images License Agreement. (Photo by Maddie Malhotra/Getty Images)

Fellow Nets star Kevin Durant sided with his teammate. “That’s on Kyrie, and that’s his personal decision,” Durant said. “What he does is not on us to speculate what may happen. We trust in Kyrie, and I expect us to have our whole team at some point.”

"That's his personal decision, what he does is not on us to speculate. I expect us to have our whole team at some point" pic.twitter.com/opXgYTJsxO

Irving is one of a handful of NBA players who are resisting taking a vaccine despite the major push to get vaxed undertaken by the league.

Indeed, the NBA is becoming afraid that Irving will band together with some of the remaining unvaxxed players and create a coalition that will hinder the league’s vaccine policies.

Irving insists that taking a vaccine is a personal medical decision that should not be mandated by any employer.