On September 11, 2012, by 6 p.m. Eastern Daylight Time, the attack by a terrorist group associated with al-Qaeda was still underway against our consulate and CIA compound in Benghazi, Libya. By this time the whereabouts of Ambassador Chris Stevens were unknown, but the State Department had been informed of the attack and that Sean Smith had been found dead.

The following is a verified timeline of what then-Secretary of State Hillary Clinton, President Obama, the White House and various administration agencies knew, when they knew it, and the now-verifiable lies told by all concerned for more than a week afterwards.

Thanks to new information uncovered by the Benghazi Select Committee, we now know for a fact that, at least in private, Clinton was telling the truth — telling others that an anti-Muslim YouTube video had absolutely nothing to do with what she immediately knew was an organized terror attack, and one that resulted in the murder of four Americans, including our ambassador.

Nevertheless, publicly, the White House, Obama, and Clinton spent more than a week afterwards covering up what they knew was the truth.

6:07 p.m. – “The State Department’s Operations Center sends an email to the White House, Pentagon, FBI and other government agencies that said Ansar al-Sharia has claimed credit for the attack on its Facebook and Twitter accounts.” — Source: FactCheck.org

*****NEW –> 8:00 p.m. – Via telephone,  Clinton spoke with Libyan President Mohamed Magariaf. In a description of the conversation found in State Department email, she said:

We have asked for the Libyan government to provide additional security to the compound immediately as there is a gun battle ongoing, which I understand Ansar as Sharia [sic] is claiming responsibility for.

10:08 p.m. – Referring specifically to Benghazi, Hillary Clinton issues a statement blaming a YouTube video for the violence. She makes no reference to terrorism.

Some have sought to justify this vicious behavior as a response to inflammatory material posted on the Internet. The United States deplores any intentional effort to denigrate the religious beliefs of others. Our commitment to religious tolerance goes back to the very beginning of our nation. But let me be clear: There is never any justification for violent acts of this kind.

A little more than an hour later, Clinton privately tells her daughter the truth.

*****NEW –> 11:12 p.m. – Via an email (no one was aware of until it was discovered by the Benghazi Select Committee), Clinton emails her daughter Chelsea: “Two of our officers were killed in Benghazi by an Al Queda-like group.”

1. In a speech at the State Department, again referring directly to Benghazi, Clinton told the world that the terror attack was “a response to inflammatory material posted on the Internet.”:

Some have sought to justify this vicious behavior, along with the protest that took place at our Embassy in Cairo yesterday, as a response to inflammatory material posted on the Internet. America’s commitment to religious tolerance goes back to the very beginning of our nation. But let me be clear — there is no justification for this, none.

*****NEW–> 2. That same day (less than 24 hours after the attack), according to newly discovered documents uncovered by the Benghazi Select Committee, Clinton told Egyptian Prime Minister Hesham Kandil that the attack “had nothing to do with the film” and that “it was a planned attack — not a protest”:

We know that the attack in Libya had nothing to do with the film. It was a planned attack – not a protest. 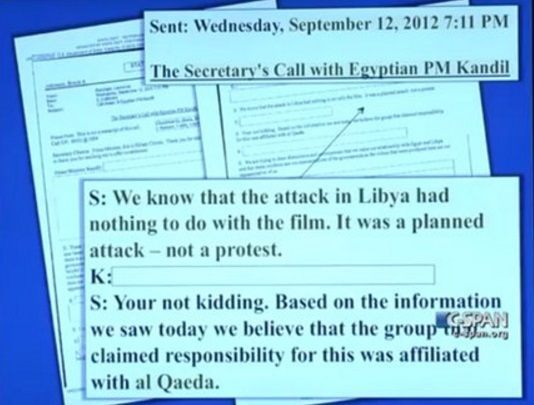 Since our founding, the United States has been a nation that respects all faiths. We reject all efforts to denigrate the religious beliefs of others. But there is absolutely no justification to this type of senseless violence. None.

Kroft: Mr. President, this morning you went out of your way to avoid the use of the word terrorism in connection with the Libya attack.

Kroft: Do you believe that this was a terrorist attack?

Obama: Well, it’s too early to know exactly how this came about, what group was involved, but obviously it was an attack on Americans and we are going to be working with the Libyan government to make sure that we bring these folks to justice one way or the other.

Kroft: It’s been described as a mob action. But there are reports that they were very heavily armed with grenades. That doesn’t sound like your normal demonstration.

Obama: As I said, we’re still investigating exactly what happened. I don’t want to jump the gun on this. But you’re right that this is not a situation that was exactly the same as what happened in Egypt. And my suspicion is, is that there are folks involved in this, who were looking to target Americans from the start.

6:06 p.m. – “Beth Jones, the acting assistant secretary of state for the Near East, sends an email to top State Department officials that reads in part: “[T]he group that conducted the attacks, Ansar al-Sharia, is affiliated with Islamic extremists.” — Source: FactCheck.Org

In prepared remarks at a State Department function, in direct contradiction to what she privately told the Egyptian Prime Minister just a day earlier, Hillary Clinton again blames the anti-Muslim video:

Unfortunately, however, over the last 24 hours, we have also seen violence spread elsewhere. Some seek to justify this behavior as a response to inflammatory, despicable material posted on the Internet. As I said earlier today, the United States rejects both the content and the message of that video. The United States deplores any intentional effort to denigrate the religious beliefs of others. At our meeting earlier today, my colleague, the foreign minister of Morocco, said that all prophets should be respected because they are all symbols of our humanity, for all humanity.

QUESTION:    At Benghazi?  What happened at Benghazi —

CARNEY: We certainly don’t know. We don’t know otherwise.  We have no information to suggest that it was a preplanned attack.  The unrest we’ve seen around the region has been in reaction to a video that Muslims, many Muslims find offensive.  And while the violence is reprehensible and unjustified, it is not a reaction to the 9/11 anniversary that we know of, or to U.S. policy.

United Nations Ambassador Susan Rice goes on all the Sunday shows. What she told Bob Schieffer, is what she told everyone:

But based on the best information we have to date, what our assessment is as of the present is in fact what began spontaneously in Benghazi as a reaction to what had transpired some hours earlier in Cairo where, of course, as you know, there was a violent protest outside of our embassy — sparked by this hateful video. But soon after that spontaneous protest began outside of our consulate in Benghazi, we believe that it looks like extremist elements, individuals, joined in that– in that effort with heavy weapons of the sort that are, unfortunately, readily now available in Libya post-revolution. And that it spun from there into something much, much more violent.

According to FactCheck.Org, Hillary Clinton did not publicly refer to Benghazi as a terror attack until September 21, more than a week after she privately told her daughter and the Egyptian Prime Minister the truth.

Just weeks before the Benghazi terror attack, in the waning days of his 2012 re-election campaign, Obama sought to reassure the country that he had Al Qaeda “decimated” and on the run. By covering up the truth of the Benghazi terror attack, by blaming it on a spontaneous protest caused by a video and not terrorism, with the help of a DC media eager to see him re-elected, Obama and Clinton effectively muddied the waters surrounding the truth of this preventable tragedy.

The DC media’s lies continue to this day.

Although the Select Committee uncovered two smoking gun documents proving Clinton knowingly and repeatedly lied to the American people in 2012, today the DC Media is covering this fact up beneath a narrative celebrating her performance before the committee and the verifiable lie that the committee failed to come up with anything new.

When confronted with this fact, Politico’s Glenn Thrush summed up the DC media as a whole: “Meh.”