Skip to content
Campaigning website Nope, Not Hope have published details of 319 councillors from Labour, Conservatives and Liberal Democrats who have been involved with the police over criminal activity or investigated for their behaviour.
The document lists all 319 Lib Dem, Labour and Tory councillors researchers have found  since 1st January and which they are updating regularly.
Site founder Dave Briggs wrote, “We have received a number of enquiries about downloadable versions of our list of councillors from other parties who have escaped national media attention for crimes and actions far worse than anything done by the odd UKIP candidate. We have therefore consolidated the list into a pdf document which features all the links, with a breakdown by crime.”
“Our Facebook page will feature rolling updates, and we will update the downloadable version as appropriate. As the document stands, it runs to 24 pages.”
The list includes 21 reports relating to paedophilia, 2 rapists, 1 terrorist, 13 involved in race hate crimes, 6 sexists or homophobes, one relating to drugs and one of abusing people with mental health.
They also detail eight expenses cases, 4 counts of benefit fraud, 28 relating to theft or fraud, 13 assaults and 3 sex scandals along with 190 falling into the ‘general misconduct’ category which mean they did not go to trial.
The site, which shines a spotlight on the hypocrisy of groups such as Hope Not Hate, say the list includes two of the group’s activists: one who raped an under-age girl and the other who broke his wife’s jaw. 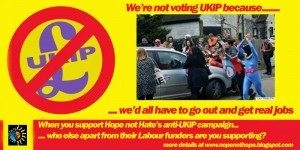 Speaking to Breitbart London Mr Briggs said: “These 319 cases are just this year. Last year there were cases such as the Labour cabinet member in Rochdale who was convicted of a homophobic assault on a fellow Labour councillor, and then resigned from Labour ‘because they did not give him enough support’.”
“Ukip pose a much bigger threat to the establishment than it wants to admit. Finding this information is not difficult, but it doesn’t fit the media narrative which is designed to protect the status quo.
“There is a big money campaign bankrolled by a strange combination of fat cat unions barons and multi-national corporations who are determined to see Ukip destroyed whatever the voters might think.”
“The media long ago gave up reporting on facts. It is now in the business of reporting its own metropolitan opinions to the exclusion of reality”
Ukip Deputy leader Paul Nuttall responded to the findings, saying it was “Incredible that these 319 councillors from the legacy parties, all convicted or stood down since January 1st have gone virtually unreported in the national media.”
“If one of these were from Ukip there would be wall to wall media coverage for days.
“It demonstrates how selective and partial some reporting has been in the run up to the General Election.
“Ukip welcome scrutiny but expect there should be a level playing field. This has not been the case in recent months.”