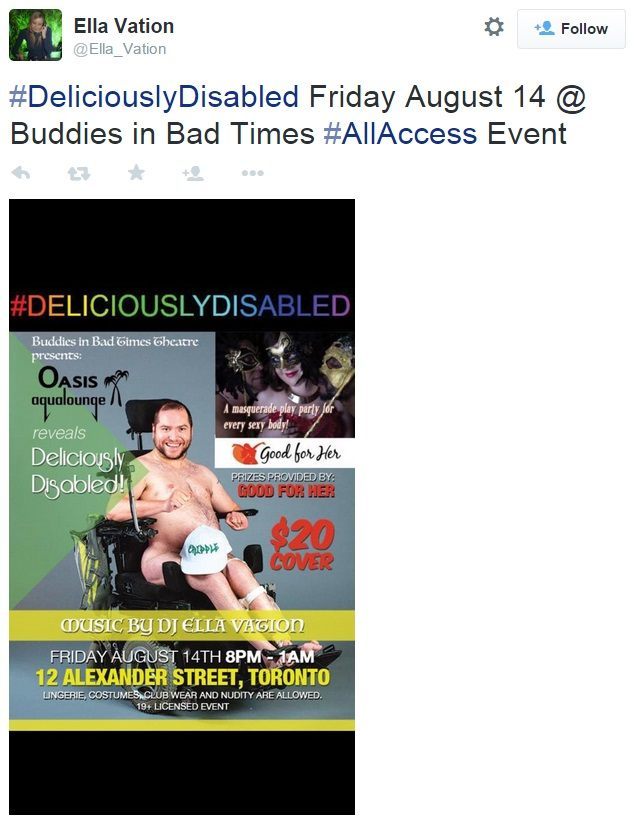 Canadian government disclosures show BIBT, who are hosting the event in conjunction with private Toronto “water themed” sex-club Oasis Aqualounge, received $50,000 from Canadian Heritage, the national equivalent of the United Kingdom’s Arts Council, between 2011 and 2012. From Toronto City Hall, the group received money through ‘arms length’ funding body the Toronto Arts Council amounting to $519,400 between 2011 and 2014.

Although taxpayers may be presently unaware of what their hard-earned money is funding today, there have been protests against BIBT receiving money from the government before. Never Going Back: A History of Queer Activism in Canada recalls activism group Concerned Citizens of Toronto campaigning against, and temporarily suspending funding for the group in 1993. The group was at the time attempting to stage a lesbian event called the ‘Female Ejaculation Pyjama Party.

The Toronto Sun reports that tickets are $20 each for the 125-capacity event – significantly less than the club’s more regular events where men can pay as much as $50 for entry (although single women pay nothing). ‘Caretakers’ for the disabled participants go for free – and the organisers are even providing an interpreter to facilitate dialogue for the deaf.

It is by no means unusual for groups, which ostensibly exist for the purpose of creating art, to use taxpayers money to promote their own unique views on sexuality. Breitbart London reported last year on a British artist who was commissioned with £100,000 of taxpayers money to create a bronze statue representing the modern family. The final work, cast in monumental form represented two women, one heavily pregnant, with their two sons. Turner-prize winning Gillian Wearing said the absence of fathers showed what “constitutes a family isn’t fixed”.

Should you be a Toronto resident, and you want to learn more about Oasis Aqualounge’s “beautifully restored 19th century mansion”, you can watch their own promotional video here: