A Czech truck driver passing through Calais has narrowly avoided being killed by migrants when they hurled a long wooden stake through the window of his cab before mobbing his vehicle. The driver was able to speed away, but police at the port said they were unable to offer assistance as he was not hurt during the attack.

But the attack, which took place on Wednesday night, has taken its toll on the driver’s career, as the frightening experience has left him unwilling to make the cross-channel journey again.

His boss has laid the blame for the attack at the feet of the European Union (EU), as he believes it’s not within the power of any one country to stem the tide of the migrant flow while tied into the wider union. However, he had some choice words for German Chancellor Angela Merkel, who has refused to back down on Germany’s open door policy to migrants holding Syrian passports. 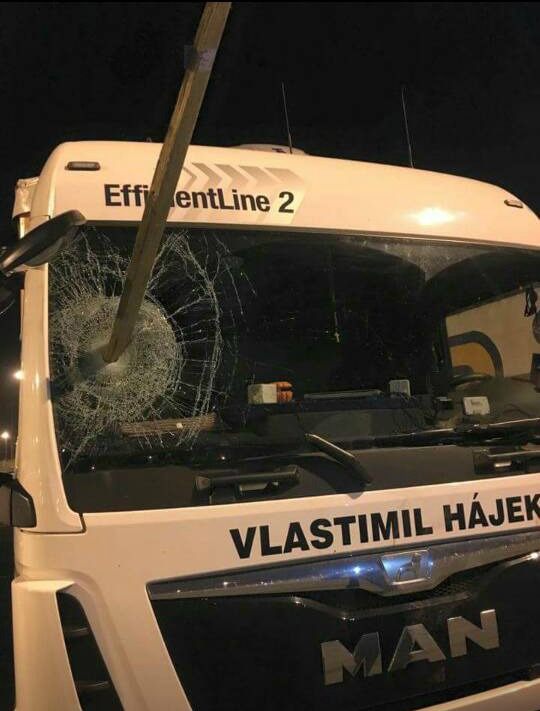 Describing the attack, Radek Novak, managing director of freight company Vlastimil Hajek told Breitbart London exclusively: “It attack happened on Wednesday night. Our driver was heading into the port when a group of immigrants – I’d like to use a stronger word but I won’t – shouted at him to stop. They asked him for food, for clothing, and for money.

“When he refused, that was when they threw the wooden stake through his window.

“Then five or six people on each side climbed up onto the cab and were trying to break in. They tried to destroy the cab.

“He was unarmed and defenceless so carried on driving with the wood in his window to get away. When he got to Calais he stopped and asked for assistance, but the police told him that as no one was injured they wouldn’t do anything.

A picture of the lorry with the stake through its window has been widely shared by haulage drivers on social media. One driver, who passes through Calais regularly commented: “This has got to stop. The authorities MUST do something about it to protect our lives, our safety and our vehicles. I can’t think of any other modernised and civilised European country that would allow this to happen.”

Others have pointed out that it was lucky it wasn’t a British right hand drive vehicle, as the driver would have been killed. The stake was about six to eight feet in length.

Novak said, following the stressful attack, his driver has decided to stop taking cross-channel loads, as it’s just too risky: 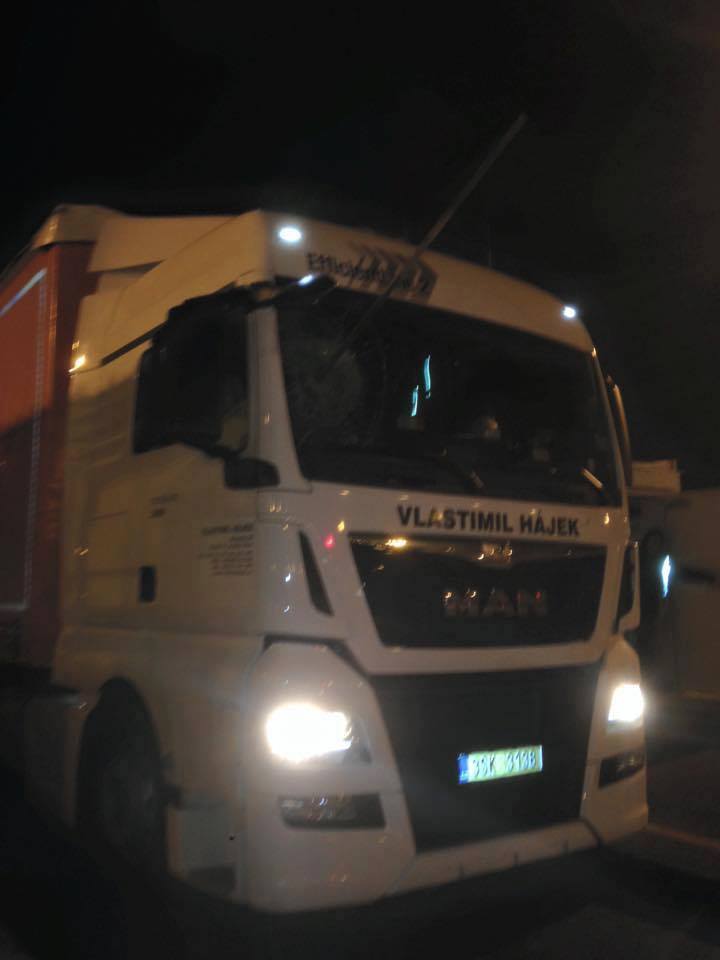 “This is now his last journey to England, he’s refusing to go again. He has been working for me for 14 years, he’s one of my best drivers.”

Radek says it’s not a problem for the English or French governments alone to sort out as it’s a global problem, although he apportions some of the blame to German Chancellor Angela Merkel. Above all, however, he’s adamant that the European Union is at fault. “I would like to see us leave the Union” he says, adding. “I’m worried for my country, I’m worried for my children.”

And, he says, he’s worried for Britain, which he believes should also leave the EU. “I visited England about five years ago,” he said. “For the first three or four days I was there, I didn’t meet a single British person. Everyone was an immigrant, at the hotels, at the car hire, not a single person was English.”

Hundreds of migrants have been rioting all this week outside the French port, causing delays to ferry services and long traffic tail-backs. Although riot police have been intermittently forcing the crowds back using tear gas, many of the migrants have retaliated by hurling stones and rocks, at the police – and at lorries, smashing cab windows.

Some drivers have taken a more proactive approach to defending themselves from migrant attack. Breitbart London reproduced today the remarkable dash-cam footage of a Hungarian driver who was determined to not become a victim — and used his lorry to charge migrants by the side of the road.