Dusseldorf, the neighbouring city to migrant sex attack capital Cologne is the first German city to see a new citizen protection league since the new year’s attacks, with thousands signing up to do their part.

Declaring “one for all, and all for one”, the motto of Sweden and a saying commonly associated with the Three Musketeers the new ‘Dusseldorf is Watching’ group already had 2,300 members after it was launched on Facebook last night. The group intends to provide protection at major events and in city centres at weekends to ensure the safety of their fellow Germans, reports the Rheinische Post. 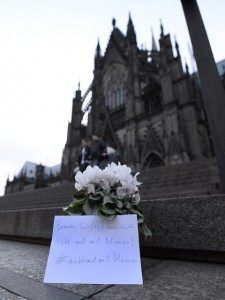 Flowers and a letter reading “One doesn’t beat women – not even with flowers” are laid down in front of Cologne’s landmark, the Cologne Cathedral, near the main railway station, on January 7, 2016, to commemorate victims of the apparently coordinated sex attacks in the western city during New Year’s Eve / ROBERTO PFEIL/AFP/Getty Images

While the desire to “protect our ladies future” appears sincere the group has already come under attack not only by police who maintain law enforcement should remain firmly their own responsibility, but also by the press who have labelled the group “absurd” and criticised it for including members of biker gangs.

A spokesman for Dusseldorf police told local media of the emergence of the vigilante group: “for public security in Germany the police are responsible… deliberately searching for offenders is not a job for the citizen”. He added the police had no problem with individuals acting courageously when confronted with crime, but they were against “self proclaimed vigilantes”.

Yet the group founder insists vigilante justice or any kind of violence are not what the group is about. All they intend to do is be “present and attentive” at major public events and on weekend evenings.

There has not yet been any comparable group established in Cologne itself, which has been described to Breitbart as being one of Germany’s most ‘progressive’ cities. The city elected an independent mayor last year who stood on a platform of pro-migrant policies as she lay in a coma, having been stabbed in the neck the day before the vote by an anti-migrant campaigner.

Breitbart London has contacted Dusseldorf, and Cologne police for comment.