Britons have reacted with outrage this morning after the front page of the Daily Star newspaper – the sister paper of the Daily Express – conflated yesterday’s brutal murder of Member of Parliament Jo Cox with the Brexit campaign. 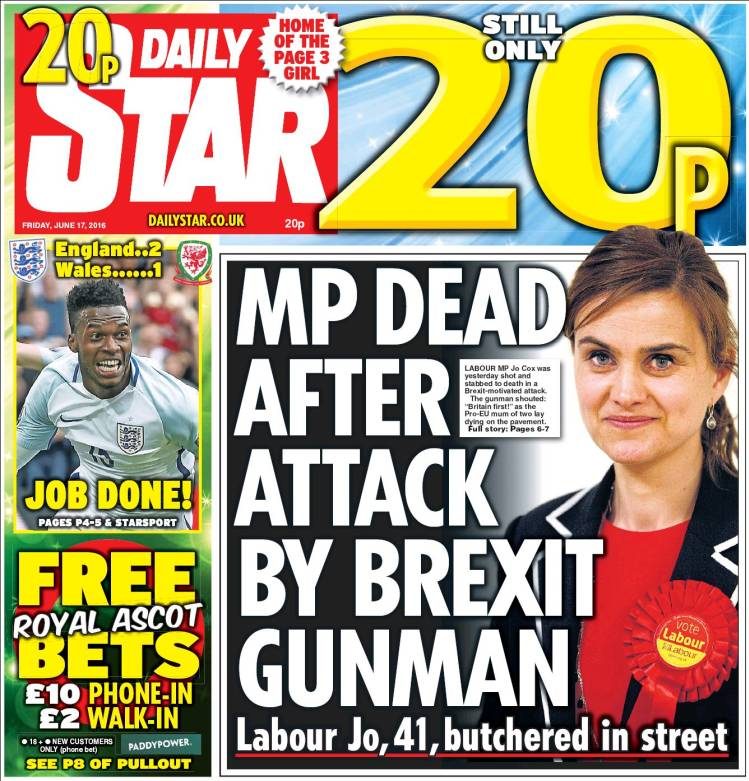 The Star, which is owned by billionaire UKIP donor Richard Desmond, splashed Mrs. Cox’s face, a Labour rosette, and the words: “MP Dead After Attack By Brexit Gunman”.

At the point of publication last night, the Star had no further information as to the motive of the killer, and doubts have now been cast on the claim that the killer shouted “Britain First”, though one eyewitness maintains he may have said “Britain First” or “put Britain first”. Britain First is the name of a nationalist political party in the UK.

Despite this, the Star chose to splash the Brexit claim on its front page, in an image reminiscent on the immediately politicising of Mrs. Cox’s death by ‘Remain’ campaigners and even European Commissioners.

Overnight it became apparent that Mr. Mair – the alleged killer – had been a subscriber to the Springbok magazine. This was the first time any political links had been made with the man, who neighbours had previously said had expressed no views on the subject.

Springbok magazine is a South African, anti-ANC, pro-“civilised-rule of Africa” outlet which has long been based out of London. Mr. Mair’s subscription was cancelled ten years ago.

There is still no indication that Mr. Mair had any links or sympathies to Britain First or the Brexit campaign, though police are understood to be still questioning the man and attempting to find his motive.