ANKARA (AFP) – A Turkish pro-government newspaper on Friday depicted Chancellor Angela Merkel on its front page in Nazi uniform with a Hitler-style moustache, labelling the German leader “She Hitler” amid a bitter war of words between Ankara and Berlin.

Right-wing tabloid-style daily Gunes (“Sun”) printed the picture along with the words in German: “#Frau Hitler” and called her an “ugly aunt”.

The mocked-up image took up most of the front page of the daily, with a Nazi swastika on Merkel’s “uniform” and another swastika next to her head while she is shown holding a gun.

Turkey and Europe are locked in a bitter spat after Germany and the Netherlands blocked Turkish ministers from holding rallies to campaign for a ‘yes’ vote in next month’s referendum on expanding President Recep Tayyip Erdogan’s powers.

Erdogan has repeatedly accused Germany and the Netherlands of acting like “Nazis”, and claimed Merkel is “supporting terrorists”. 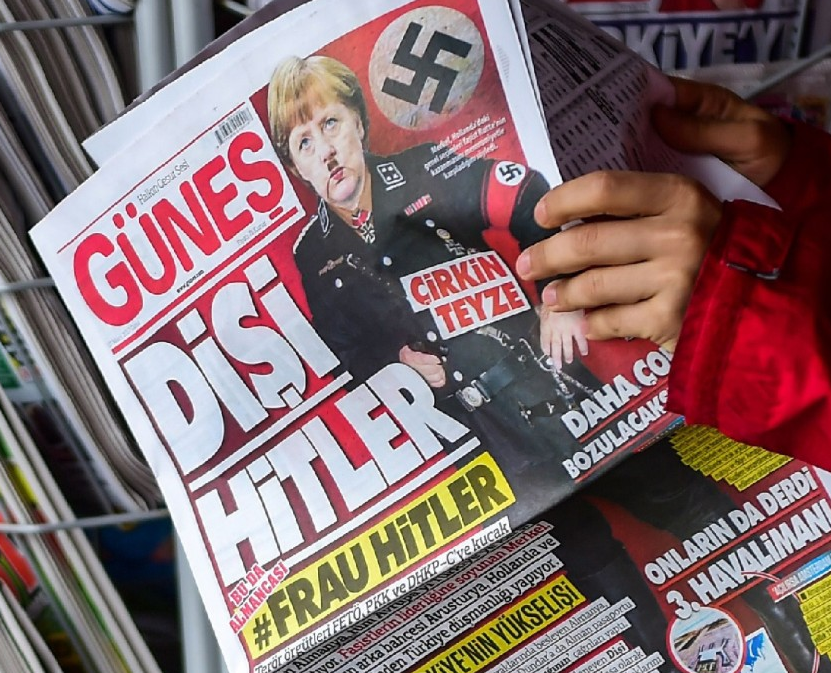 His behaviour has prompted an angry reaction from Europe, with Merkel and French President Francois Hollande lashing the comments as “unacceptable” on Thursday.

The front page also accused Merkel of trying to be the leader of fascists, creating anti-Turkish enmity using Austria, the Netherlands and Belgium in “Germany’s backyard”.

“Germany, which has open arms for terrorist organisations… is trying to instigate the whole of Europe against Turkey,” the daily said.

German deputy government spokesman Georg Streiter refused to be drawn into the controversy, only saying: “We are not taking part in a game of provocation.”

The front page was published two days after German mass circulation daily Bild lashed out at Erdogan, accusing him of “endangering Europe’s stability through his lust for power”.

“Bild tells the truth to Erdogan’s face — you are not a democrat! You are hurting your country!” the German daily had said.

Bild’s front page hugely upset Ankara and the foreign ministry issued a statement describing the article as “mind-boggling” and part of a mindset “hinging on hatred”.

The media outlets that publish such articles are “are doomed to take their places in the trash of history,” the foreign ministry said.