Ten have been killed and more than a dozen more injured after a white rental truck mounted the pavement in central Toronto, Canada, and “deliberately” mowed down pedestrians.

Read updates on this developing story. The original story is below:

Update, 16:00 British Summer Time: Attack Suspect Alek Minassian has been charged with ten counts of murder and 13 counts of attempted murder as he appeared in a Canadian court Tuesday morning, following the attack in Toronto in which dozens were run down on a busy street.

In a major development surrounding the mental state and potential motive of the suspected killer, Canada’s CBC has reported Facebook confirmed the authenticity of a post left on Minassian’s account before the attack, in which he referred to an “Incel Rebellion” and gunman Elliot Rodger who killed 14 in 2014 during a vehicle ramming attack.

“Incel”, a label referring to the ‘involuntarily celibate’ who have failed to make a connection with members of the opposite sex may link Minassian with Rodger, who wrote in his manifesto before embarking upon killing about his failure to find a girlfriend and hatred of those who had succeeded.

The Facebook message now confirmed as genuine read: “The Incel Rebellion has already begun! We will overthrow all the Chads and Stacys [online jargon for ordinary, popular young people]! All hail the Supreme Gentleman Elliot Rodger!”

UPDATE: Facebook confirms to CBC's Matthew Braga @mattbraga that the post from Alek Minassian referencing "The Incel Rebellion" and Elliot Rodger is real, and was posted publicly on his profile before Facebook shut it down.

Update, 12:00 British Summer Time: Suspect Alek Minassian, 25 years old, of Richmond Hill Ontario will appear in court Tuesday at 1000 Eastern Time. Nothing is known about the motive of the suspect yet, although Canada’s Globe and Mail newspaper reports the remarks of former classmates of the accused killer who said he suffered from a “social disability”.

The first named victim of the attack is Anne-Marie D’Amico, who worked for investment management company Invesco in the city, reports CBC. 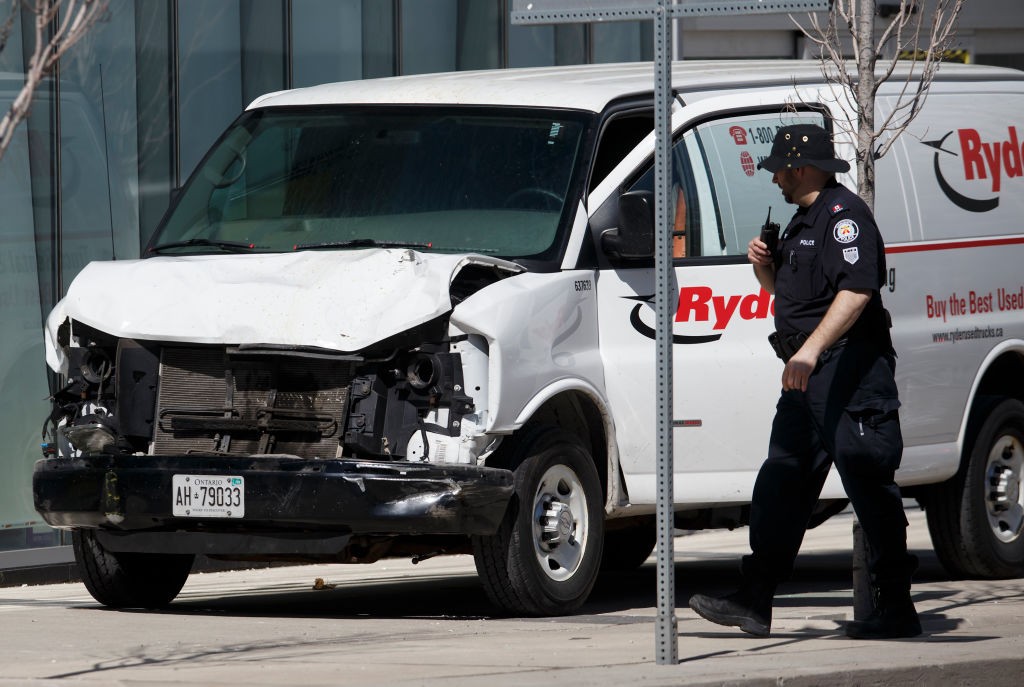 TORONTO, ON – APRIL 23: Police inspect a van suspected of being involved in a collision injuring at least eight people at Yonge St. and Finch Ave. on April 23, 2018 in Toronto, Canada. A suspect is in custody after a white van collided with multiple pedestrians. (Photo by Cole Burston/Getty Images) 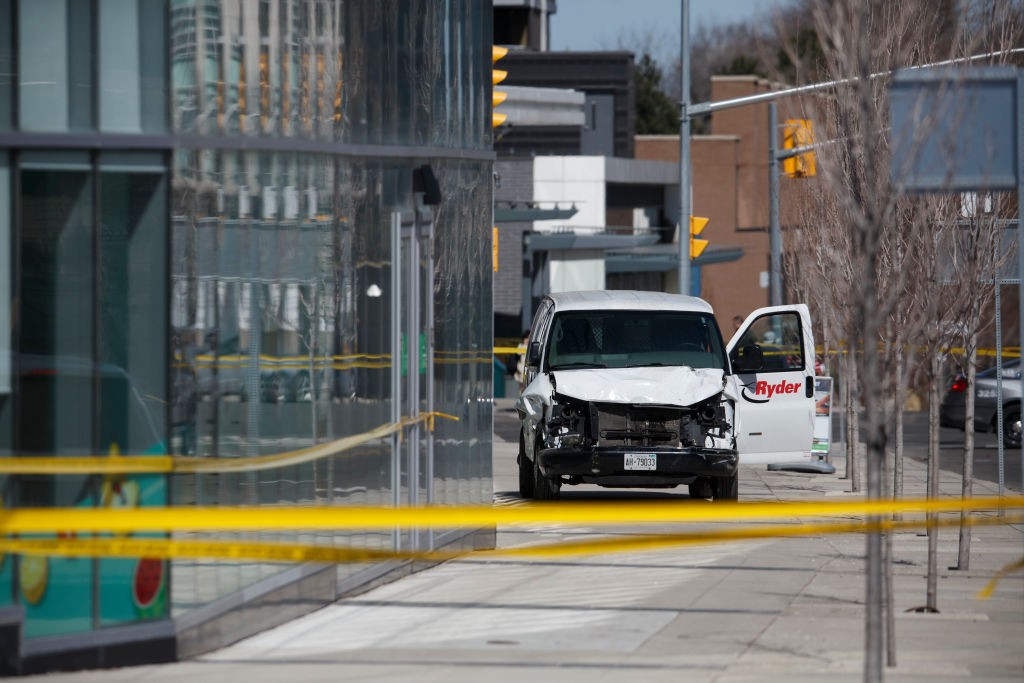 TORONTO, ON – APRIL 23: Police inspect a van suspected of being involved in a collision killing ten / Photo by Cole Burston/Getty Images 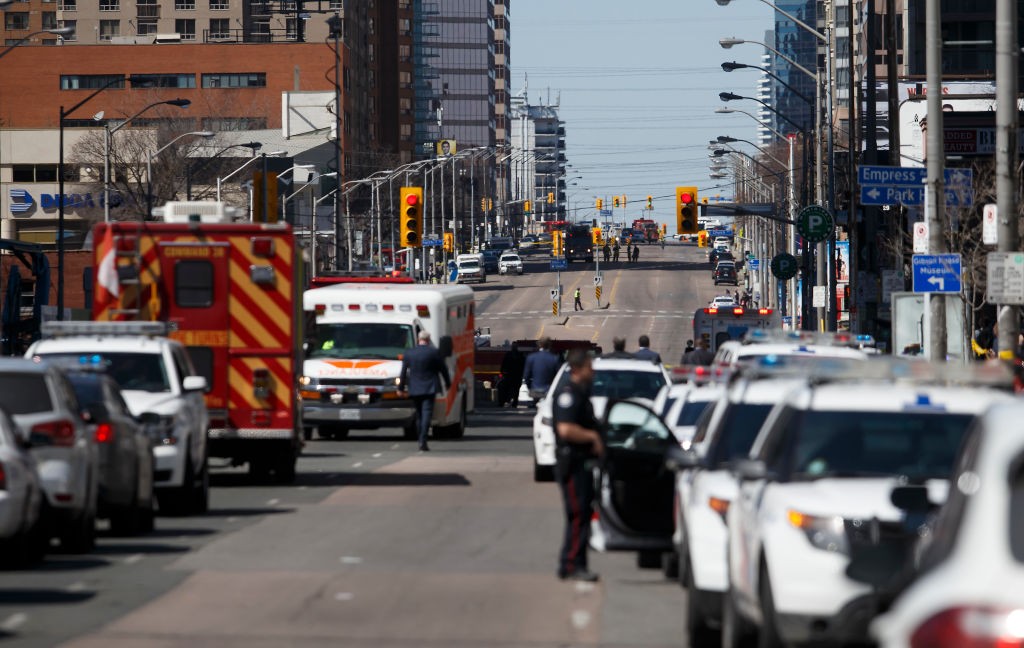 TORONTO, ON – APRIL 23: Law enforcement and first responders on scene at Yonge St. at Finch Ave. after a van plows into pedestrians April 23, 2018 in Toronto, Ontario, Canada. A suspect is in custody after a white van collided with multiple pedestrians. (Photo by Cole Burston/Getty Images) 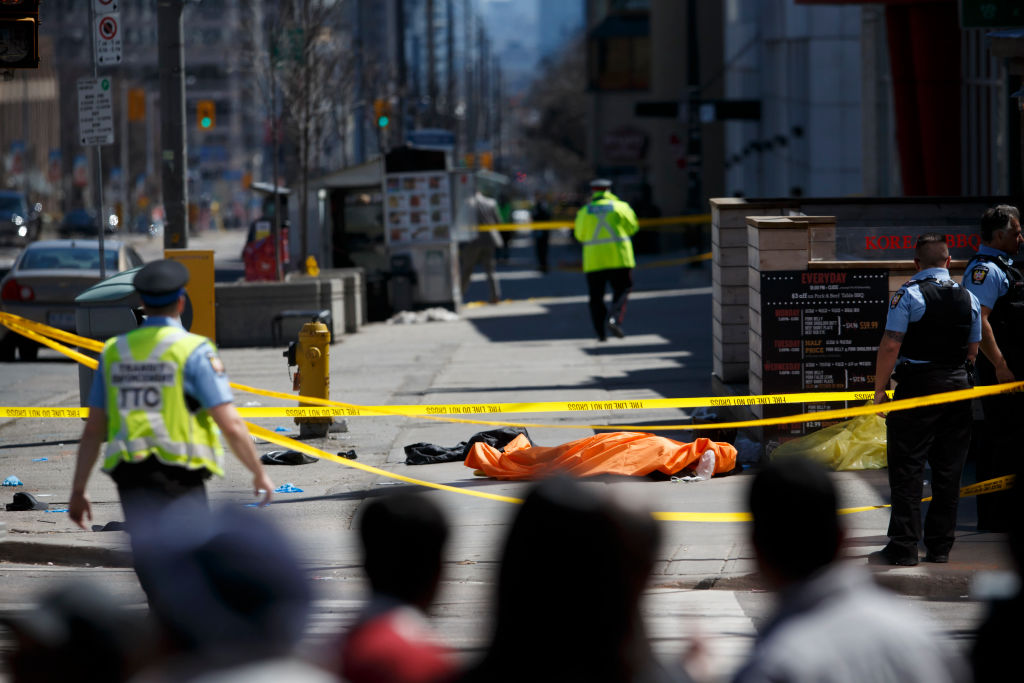 TORONTO, ON – APRIL 23: A tarp lays on top of a body on Yonge St. at Finch Ave. after a van plowed into pedestrians on April 23, 2018 in Toronto, Canada. A suspect is in custody after a white van collided with multiple pedestrians. (Photo by Cole Burston/Getty Images)

Update, 8:25 PM Eastern: At the evening press conference, Public Safety Minister Ralph Goodale stated there is currently no reason to believe the suspect is connected to international terrorism or poses a threat to national security.

Toronto Police Chief Mark Saunders said his department is still working on identifying the victims and establishing a motive for the attack. Contrary to some earlier media reports, he said the suspect was not previously known to the police. Saunders praised the responding officers for taking Minassian into custody without resorting to deadly force but deferred most other questions from reporters by saying the investigation is ongoing.

Update, 8:15 PM Eastern: Police report that a tenth person has succumbed to their injuries from the van attack. At a press conference, the authorities confirmed that 25-year-old Alek Minassian is the suspect in custody.

Update, 7:40 PM Eastern: CBC reports that according to Alek Minassian’s LinkedIn profile, he is a student at Seneca College. Anonymous officials cited by CBC said that Minassian “is not associated with any organized terrorist group and he does not represent a larger threat to national security.”

Update, 7:15 PM Eastern: CBC News posted video of the police confrontation with the suspect, who can be heard yelling “Kill me, I have a gun in my pocket, shoot me in the head!” and brandishing an object at the officers.

Update, 7:05 PM Eastern: “Our thoughts are with all those affected by the terrible incident at Yonge and Finch in Toronto. Thank you to the first responders working at the scene – we’re monitoring the situation closely,” Canadian Prime Minister Justin Trudeau said via Twitter.

Sunnybrook Hospital reports that ten victims were brought to its trauma center. Two of them died, five are in critical condition, two are in serious condition, and one is in fair condition.

Public Safety Minister Ralph Goodale described the incident as an “attack,” but would not confirm whether it has been classified as a terrorist attack. As a precaution, security has reportedly been increased at the Air Canada Center in downtown Toronto for the Stanley Cup playoff game tonight.

Update, 6:45 PM Eastern: CBS news has claimed to have identified the driver of the van as 25-year-old Alek Minassian while U.S. sources have told Reuters that terrorism is the leading theory for the motivation for the attack. Toronto police have not confirmed the identity of the suspect in the attack and a press conference is scheduled for later this evening.

Canadian broadcaster CTV has confirmed that Minassian is the suspect in police custody, though Toronto police claim that he was not previously on their radar.

#BREAKING: CTV News has confirmed the driver of the van allegedly involved in this afternoon's deadly incident is named Alek Minassian. Sources say he is not known to police and motive for the incident is not yet known.

Police in Toronto reported multiple injuries and fatalities after a white van struck pedestrians at the busy intersection of Yonge Street and Finch.

The incident occurred in the early afternoon at the intersection which lies close to the Finch subway and bus station, one of the busiest transport hubs in the city of Toronto. One suspect appears to have been arrested.

Newstalk 1010 reports that up to 9 people are dead following the attack.

Witnesses told local TV crews that the driver was traveling at around 45 miles per hour, “crumbling up people” and taking the action “intentionally”.

Eye witness telling local TV the driver was driving at least 70 or 80km an hour on the sidewalk. Witness in tears said driver was “crumbling up people” “this person was intentionally doing this”

Photos, which has been posted online show multiple people on the ground as a result of the incident. The Toronto subway system, known as the TTC, has shut down service to Finch station in response.

Toronto police are now reporting multiple fatalities following the incident which has seen a man, described as being “Middle-Eastern” in appearance, arrested a short distance away.

The van used in the incident appears to have been rented from the Ryder truck rental company according to photos posted on social media.

After multiple pedestrians plowed down on Toronto sidewalk, driver gets out holding what appears to be a gun. Police arrest him. No shots fired. pic.twitter.com/xWHeylS1d8

Canadian Prime Minister Justin Trudeau gave a brief statement to the media in the houses of parliament in Ottawa, sharing his condolences for the victims and their families. “Obviously we’re just learning about the situation in Toronto. Our hearts go out to anyone affected. We’re going to obviously have more to learn and more to say in the coming hours,” he said.

#UPDATE: Toronto Police confirm a van mounted the curb and hit a number of pedestrians. The driver fled the scene. Police later located the vehicle at Yonge and Sheppard. Driver is in custody, alive, and no motive at this point @Citynews

Alex Shaker, who was driving at the time of the incident and witnessed the van hit multiple people, told CTV News: “He started going down on the sidewalk and crumbling down people one by one. He just destroyed so many people’s lives. Every single thing that got in his way.” Shaker also claimed that one of the victims had been pushing a children’s stroller.

BREAKING: Police in Canada say van that struck 8 to 10 people in Toronto found and driver in custody.

BODIES ALL OVER YONGE ST: Multiple pedestrians struck by van in Torontohttps://t.co/APqGMQLwJc pic.twitter.com/OqIgZQigOu