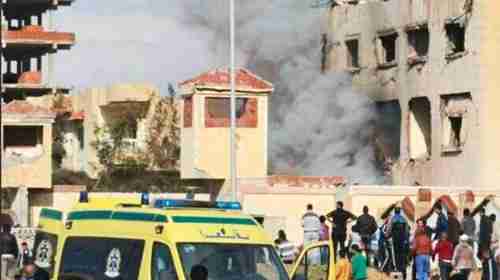 From November 2017: Rescue personnel at the site of the bomb blast at Al-Rawda mosque in North Sinai. (Gulf News)

Egypt’s army announced the launch of a major military operation in the Sinai Peninsula. The operation will be targeting several jihadist terror militias, but it is expected that the major target will be the Bedouin-based Sinai terrorist group Ansar Bayt al-Maqdis (ABM – Ansar Jerusalem – Champions of Jerusalem), which changed its name to al-Wilayat Sinai (Province of Sinai) when it changed its allegiance in 2015 from al-Qaeda to the so-called Islamic State (IS or ISIS or ISIL or Daesh).

In November, at least 235 people were killed when ABM terrorists stormed the Al-Rawda mosque in Bir al-Abed in Egypt’s Northern Sinai with explosives and gunfire with heavy weapons.

At that time, Egypt’s president Abdel-Fattah al-Sisi promised revenge for these “vile and treacherous” attacks:

The army and police will avenge our martyrs and return security and stability with force in the coming short period.

In 2014, al-Sisi declared a state of emergency in northern Sinai following a suicide bombing that killed 33 soldiers. He said at the time that “the war in Sinai will last for a long time, as there are a lot of terrorists hiding in the peninsula, but this new level of attacks has put us in a new level of planning too in order to combat the terrorism there.”

The operation announced on Friday is called “Comprehensive Operation Sinai 2018.” The operation is said to be unprecedented in its scope, coordination, and size, involving thousands of troops. According to the army’s announcement:

[This] morning the law enforcement forces began to implement the Comprehensive confrontation plan of terrorist and criminal elements and organizations in North and Central Sinai and other areas of the Delta of Egypt and the Western Desert linebacker. [The objectives are] clearing areas where there are terrorist hotbeds, and to fortify Egyptian society from the evils of terrorism and extremism in parallel with other crimes affecting security and internal stability.

As part of ongoing law enforcement efforts, elements of the Air Force have targeted some of the hotspots, dens, weapons and ammunition depots used by terrorist elements as a base for targeting law enforcement forces and civilian targets in Northern and Central Sinai.

The timing of the operation is probably related to Egypt’s 2018 presidential election, in which el-Sisi is running for reelection. The election will be held on March 26-28. Al-Ahram (Cairo) and Egypt Today

Multiple reports indicate that Egypt and Israel are cooperating in Sinai

For several years, there have been reports that Egypt and Israel have been cooperating in Egypt’s Sinai region. These reports were not confirmed, and some readers criticized me for mentioning them at all. Nonetheless, I always believed that they were true because they made sense. Terrorists in Northern Sinai were killing Egyptians, and they were also shooting missiles across the border into Israeli towns. It seemed logical that the two countries would cooperate military to destroy their common enemy.

Now, in the last two weeks, there have been a flurry of new reports about this. Once again, the reports have not been officially confirmed, but they are now widely believed.

Egypt and Israel signed a peace treaty in 1979. The treaty included the provisions that neither Israel nor Egypt can mass military forces or take military actions in Northern Sinai.

Several years ago, Israel and Egypt announced that Israel was waiving the restriction on Egypt’s military in Sinai, so that Egypt’s army could fight the jihadist militias. However, the possibility of Israeli airstrikes into Sinai is clearly forbidden by the treaty, and if permitted by Egypt would be a very controversial issue in the Arab world, and could expose Egypt to criticism from its Arab allies.

For more than two years, unmarked Israeli drones, helicopters and jets have carried out a covert air campaign, conducting more than 100 airstrikes inside Egypt, frequently more than once a week — and all with the approval of President Abdel Fattah el-Sisi.

The report has been dubbed “fake news” by some Arab media, but there seems to be little doubt that it’s true. BBC and Middle East Eye and VOA and Jerusalem Post