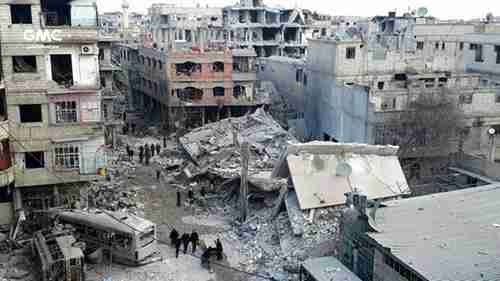 Western leaders are expressing horror at the siege of Eastern Ghouta in Syria, which is amounting to mass extermination of innocent civilians, potentially including tens of thousands of innocent women and children. The siege and the mass extermination are being led by Syria’s president Bashar al-Assad and backed by Russia’s president Vladimir Putin and Iran’s Supreme Leader Seyed Ali Khamenei. All three of these people – al-Assad, Putin and Khamenei – are massively committing war crimes and crimes against humanity, and all three should be condemned as the worst kinds of war criminals, the worst war criminals so far this century.

Hundreds of people have been killed just since Sunday from missiles, shell fire, and barrel bombs packed with explosives and metal and laced with chlorine gas. The war criminals are particularly targeting bakeries, so people will starve, and hospitals, so the wounded cannot be treated, as well as food and aid convoys. Bashar al-Assad, who considers the 400,000 residents of Eastern to be cockroaches to be exterminated, wants to make sure that the baby cockroaches, in his view, won’t grow up to be adult cockroaches.

The siege is a repeat of the similar attack on East Aleppo at the end of 2016. There were 275,000 people in Aleppo, and it took al-Assad, Putin, and Khamenei six months to destroy the city enough to “take control.” By the end, the city was almost completely deserted, since thousands of people had been able to escape from the city and flee to the countryside.

According to reports, Syrian army forces are massing and could enter Ghouta for the final slaughter at any time.

The justification used by al-Assad, Putin, and Khamenei is that among the 400,000 civilians there are some jihadists. An analogy in America would be if an American city contained some people from the Black Panthers or Black Lives Matter, then it would be OK with al-Assad, Putin, and Khamenei for the army and air force to exterminate all the people in the black neighborhoods in that city. United Nations and AP and BBC and Middle East Eye 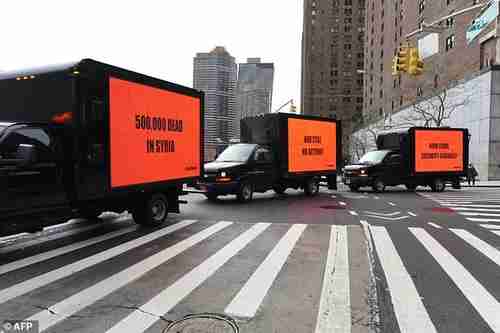 Inspired by the Oscar-nominated film ‘Three Billboards Outside Ebbing, Missouri,’ three billboards circle the United Nations on Thursday for three hours to demand action on Syria from the Security Council (AFP)

Sweden and Kuwait presented a draft resolution to the United Nations Security Council for a 30-day ceasefire in Eastern Ghouta, during which food and humanitarian aid could be delivered to the residents.

This, of course, is completely laughable, since al-Assad, Putin, and Khamenei are interested in exterminating people, not a ceasefire. Ironically, Eastern Ghouta is already a ceasefire zone, having been designated by Russia as one of the four “de-confliction zones,” based on the agreements signed with Turkey and Iran in Astana, Kazakhstan. Putin said that it would be a ceasefire zone, but as with everything that Putin says, it was a lie designed to cover up future extermination plans. This lying as a cover-up has been used repeatedly by Putin in Syria, Ukraine, Crimea, Georgia, and elsewhere.

Needless to say, Russia has done everything possible to sabotage the draft resolution by offering numerous amendments to do things like exempt jihadists and terrorist. However, since al-Assad, Putin, and Khamenei consider everyone in Ghouta, including innocent women and children, to be “terrorists,” these amendments make the resolution meaningless. If there is ever a vote on a meaningful resolution, then Russia will veto it.

It never ceases to amaze me how the original principles of the United Nations have been turned on their head, and the UN is now used as a cover and a tool to support war crimes and genocide rather than prevent them.

As I wrote in 2011, Russia adopted a specific policy of using the UN Security Council as a tool to control the foreign policy of the United States, Europe, and NATO, while leaving itself free to pursue any policy it wanted. ( “22-Apr-11 News — Russia seeks to cripple Nato through Libya United Nations politics”)

The way it works is that Russia demands that all actions taken by NATO be approved by the U.N. Security Council, where Russia has a veto, giving Russian an effective veto over all NATO operations. The Russians then can invade Ukraine, invade and annex Crimea, and commit war crimes in Syria with complete freedom and impunity, because of the double standard – they never ask approval of the UNSC, while they insist that NATO do nothing without getting UNSC approval.

Russia has worked with China to carry this policy even further. Russia and China have been invaded and annexed other countries’ regions, just as Hitler did. This is something that the United Nations was formed specifically to prevent. But all the UN can do now is whatever Russia and China force it to do, using vetoes and ignoring international law. Incredibly, China is building massive military bases in the South China Sea and completely ignoring United Nations court decisions that declare them illegal. And yet they insist that the United States and all other countries be completely restricted by UN laws.

It is absolutely incredible how Russia and China have now only completely crippled the United Nations, but actually done worse – they are using the United Nations as a tool to subvert and enable the crimes that the UN was formed to prevent. It is a truly remarkable historic event, and it shows again how the world is headed for World War III.

North Korea is insulting and provoking the South Koreans by saying that it has selected Kim Yong-chol to head the North Korean high-level delegation to the closing ceremony of the Olympics games on Sunday.

Incredibly, Kim Yong-chol is the man that the North will send to lead the festivities on Sunday, and South Korea’s president Moon Jae-in is expected to roll out the red carpet for him. Kim Yong-chol has been blacklisted and sanctioned by both South Korea and the U.S., and he is currently in charge of North Korea’s department in charge of the regime’s agitation against South Korea.

The families of the victims of the Cheonan and Yeonpyeong attacks are furious at what is happening. It appears that North Korea’s latest charm offensive is suddenly over. Chosun Ilbo (Seoul)