Over the past year, the number of children adopted by lesbian, gay, bisexual, and transgender (LGBT) couples and individuals reached a record high, comprising more than one in 12 of adoptions in the UK.

This year marks the 10th anniversary of the Adoption and Children Act which gave LGBT adopters the same legal rights as heterosexual adopters. The new figures, released by the department of education, reveal consistent year on year rises over the past decade.

In 2007, the first year with recorded figures, same sex couples adopted just 90 children across Britain. There were five and a half times as many this year, with the number standing at 497. 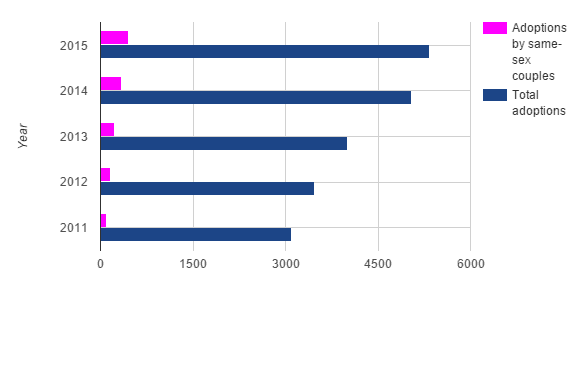 The total number of adoptions has also risen dramatically over the same period, meaning the growth in the number of same-sex couples has also outstripped the more general rise.

However, there are still thousands of children up and down the country waiting for a home, and research published in 2013 indicated that there could be up to four million people in England likely to consider adopting or fostering at some point in the future.

The rising number of adoptions has been boosted by raft of new government measure, brought in over the last two years, designed to make the process quicker and easier.

The state now offers support through every step of the adoption and fostering process, from filling in the forms to becoming an approved adoptive or foster parent, to bringing the child home for the first time.

Around £17 million has been invested in voluntary adoption agencies – which recruit and support adopters – including £400,000 to launch the first adoption service exclusively for LGBT people.