The parents of baby Charlie Gard have delivered a petition with more than 370,000 signatures to Great Ormond Street Hospital for Children imploring hospital administrators to allow them to take Charlie to the U.S. for potentially life-saving treatment.

After delivering the petition, Charlie’s father Chris Gard told press Sunday afternoon: “We just want to thank you all for being here… Our special thanks goes to everyone in America and everyone in Rome who has supported us and who believes that Charlie deserves this treatment as we believe he rightly does.

“We are trying to take our son from one hospital where they do a lot of specialities there. It’s a fantastic hospital. They do great things there. Unfortunately, they are not specialists in Charlie’s condition. The specialists are in America.” 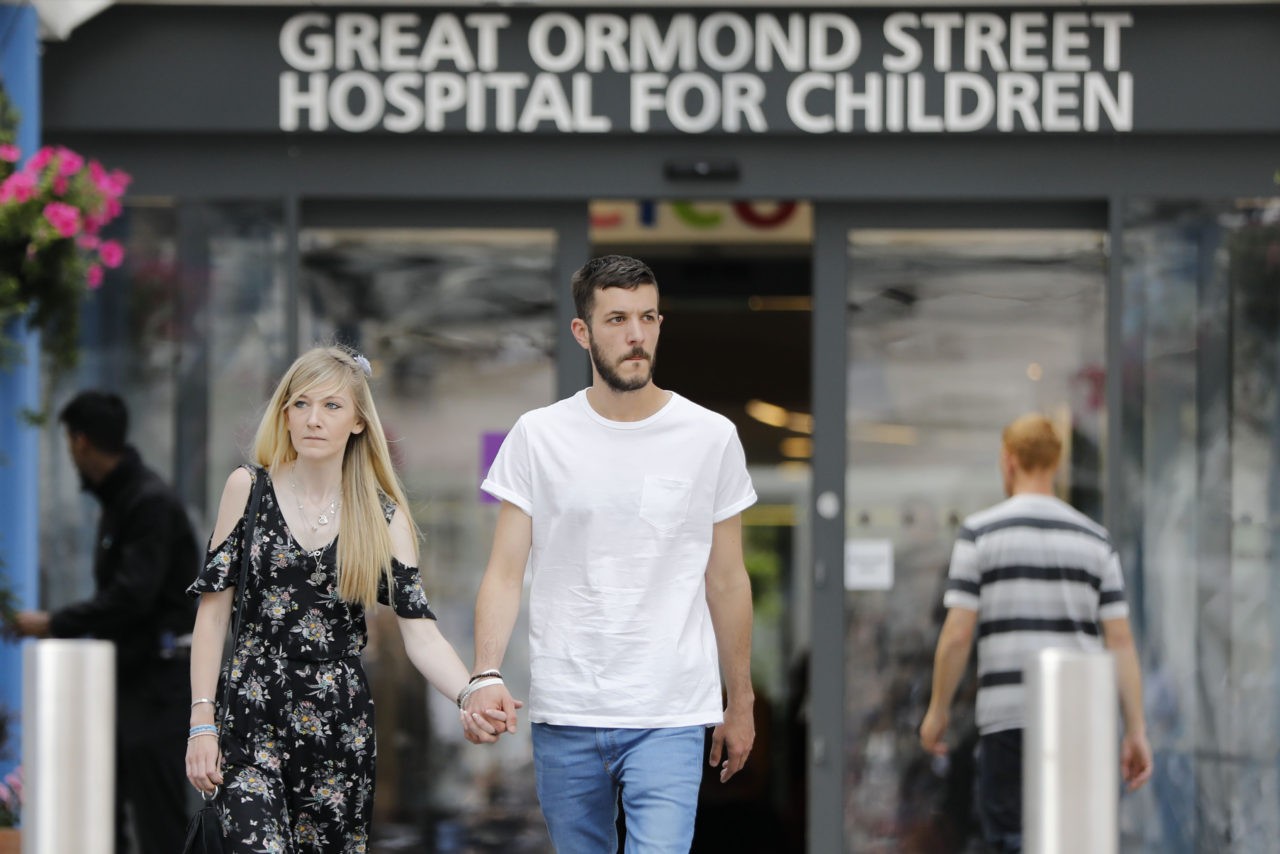 Connie Yates (L) and Chris Gard, parents of terminally-ill 10-month-old Charlie Gard, walk out of the Great Ormond Street Hospital for Children after delivering a petition of signatures supporting their case, in central London on July 9, 2017. The British hospital treating a terminally ill baby boy said on July 7, 2017 it would examine claims that he could be treated after US President Donald Trump and Pope Francis drew international attention to the case. / AFP PHOTO / Tolga AKMEN (Photo credit should read TOLGA AKMEN/AFP/Getty Images)

Charlie’s mother Connie Yates added: “There are now seven doctors supporting us from Italy, America, and England, as well, that think that this [treatment] has a chance. There is an up to 10 per cent chance [of success] and we feel that is a chance worth taking. We’ve been fighting for this medication since November. We are now in July.”

Iterating her fight for parental rights, Ms. Yeats said: “He’s our son, he’s our flesh and blood. We feel it should be our right as parents to decide to give him a chance at life. 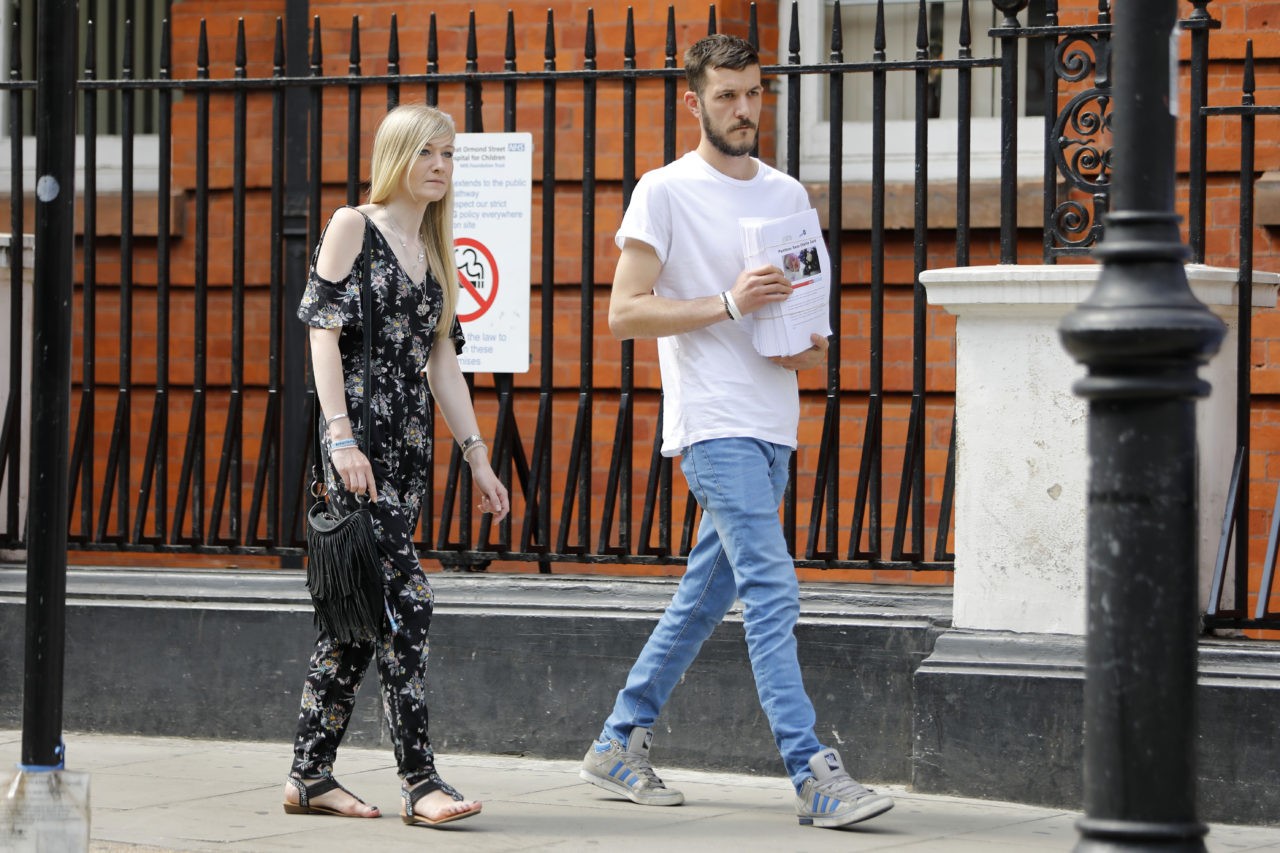 Charlie’s fight for life received high-profile support from U.S. President Donald Trump and Pope Francis, with U.S. lawmakers planning to introduce legislation next week that would grant lawful permanent resident status in the U.S. to the child so he can receive treatment. The Vatican’s children’s hospital also offered to treat the child, but the move was barred by “legal reasons”.

The delivery of the petition comes after Great Ormond Street Hospital on Friday applied to the High Court for a new hearing after “claims of new evidence relating to potential treatment for his condition”. 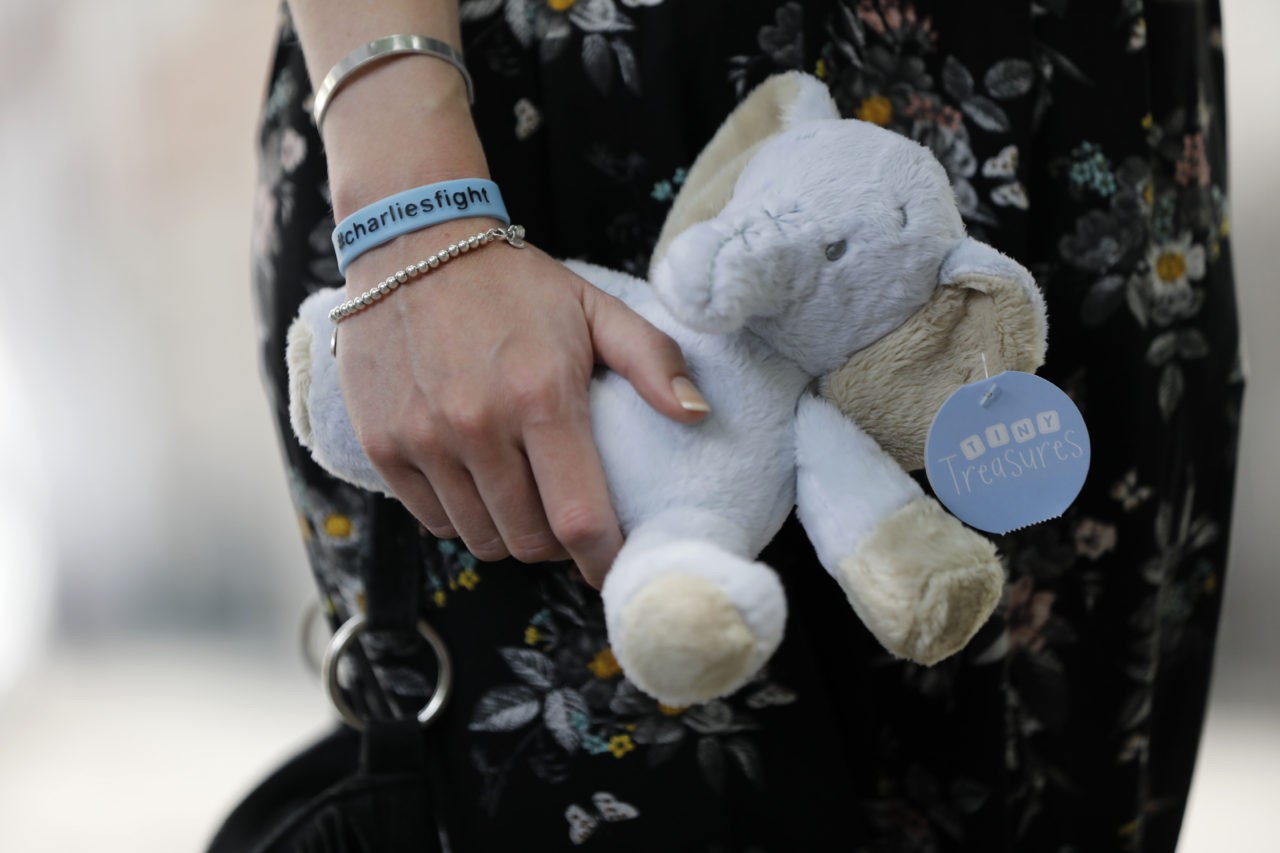 Sky News’s Ashish Joshi spoke to a leading American pro-life lawyer who is close to the family, the chief executive of Americans United for Life, Catherine Glenn-Foster, about the new High Court hearing, who said it was “very, very, promising”.

“It gives [Charlie] a few more days and it means that the court can, in fact, rule that the hospital does not have the right, after all, to remove his ventilator and his feeding tube, and in fact should be transferred to another hospital to receive this cutting edge therapy or in fact even provide it right here,” said Ms. Glenn-Foster. 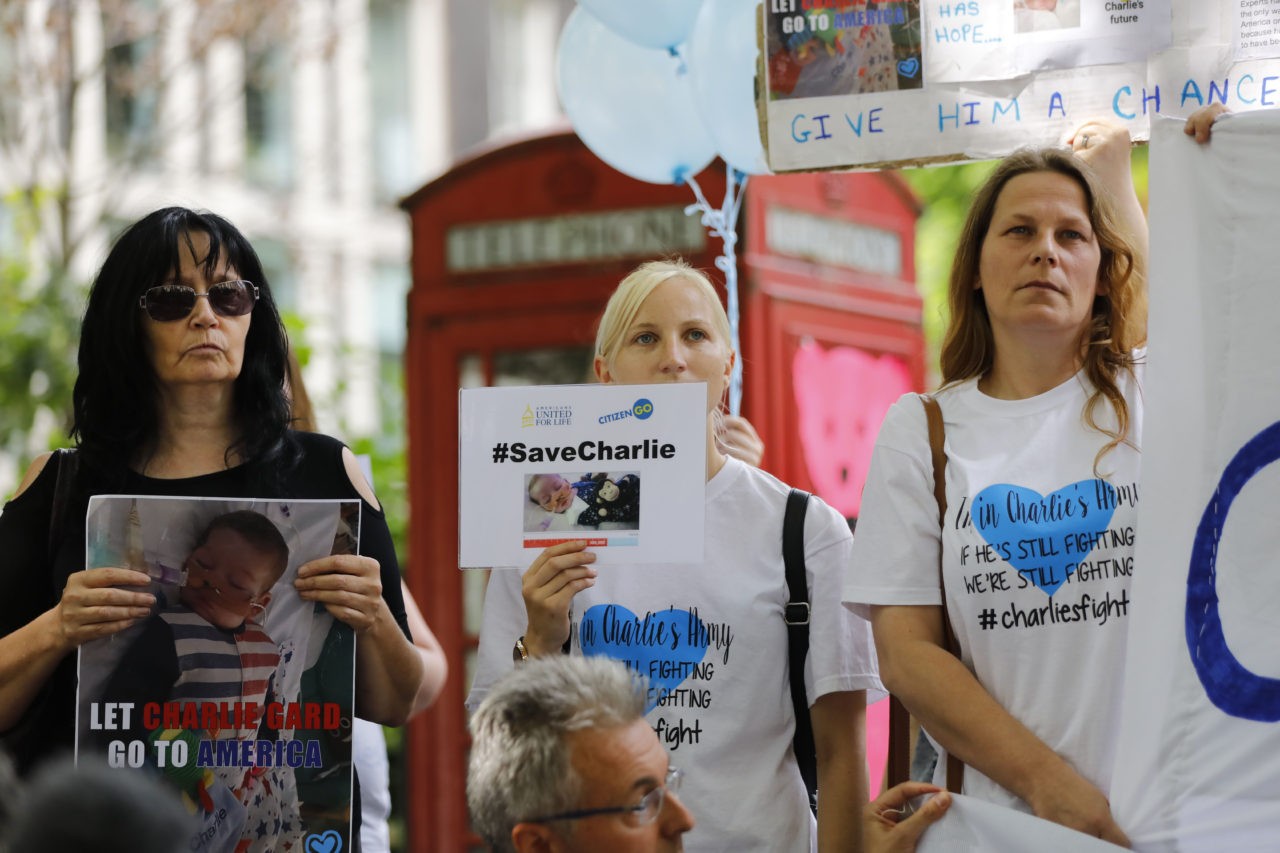 Supporters hold placards as they wait for Connie Yates and Chris Gard, parents of terminally-ill 10-month-old Charlie Gard, prior to his parents delivering a petition of signatures supporting their case to the Great Ormond Street Hospital for Children in central London on July 9, 2017.  (Photo credit TOLGA AKMEN/AFP/Getty Images)

Asked how Charlie’s parents were feeling, the pro-life advocate said: “They are stressed as anyone would be in this situation, where their own parental rights are being stripped away by an institution that was hired to care for their son and instituted to care for the most vulnerable among us.

“That very institution hired to care for Charlie is trying to strip him of his rights and his parents of their rights to even just take him to get a second opinion.” 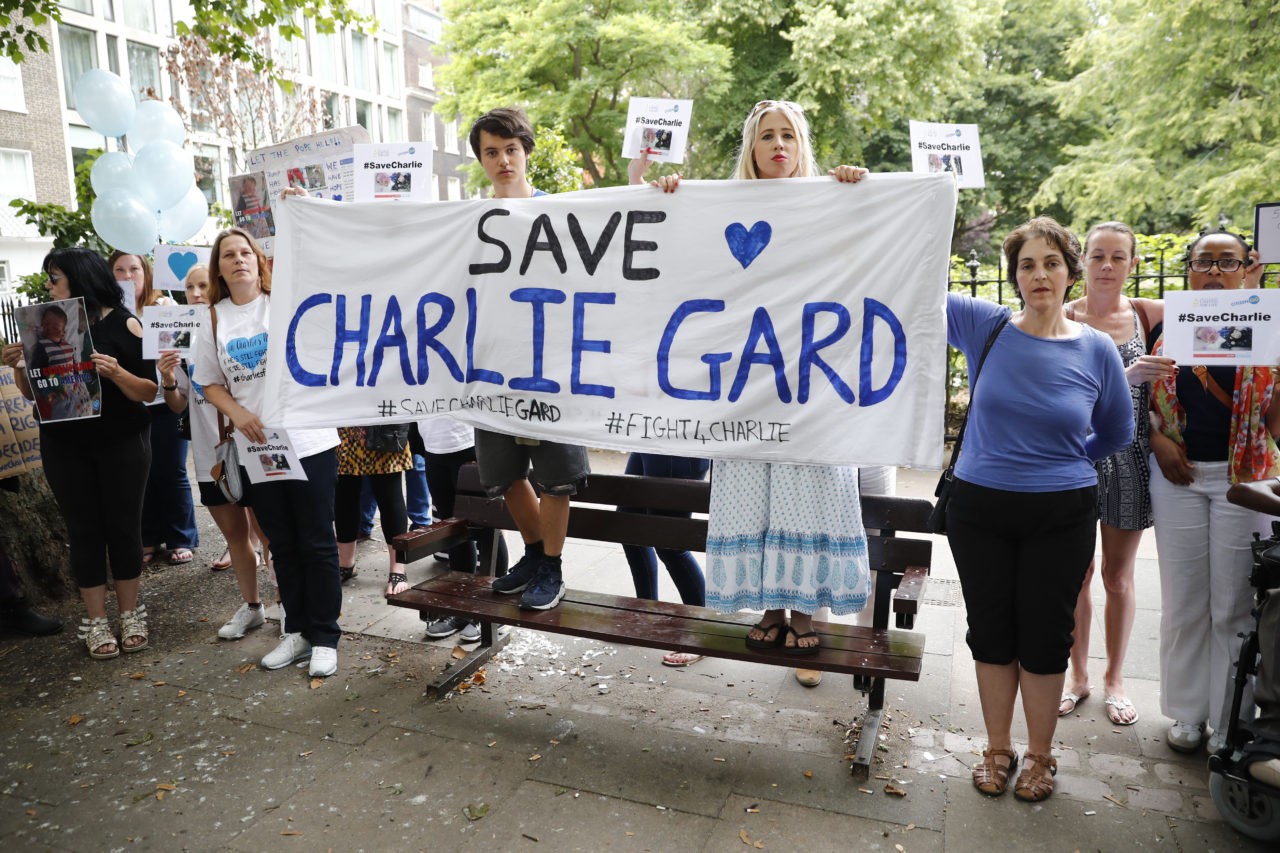 Charlie’s parents want to bring Charlie to the U.S., where a specialist is willing to offer him an experimental treatment for his rare condition called infantile onset encephalomyopathic mitochondrial DNA depletion syndrome, or MDDS. They have raised £1.3 million to pay for Charlie’s treatment and transportation themselves through an online appeal. Baby Charlie has his U.S. visa, and is “fit to fly“. 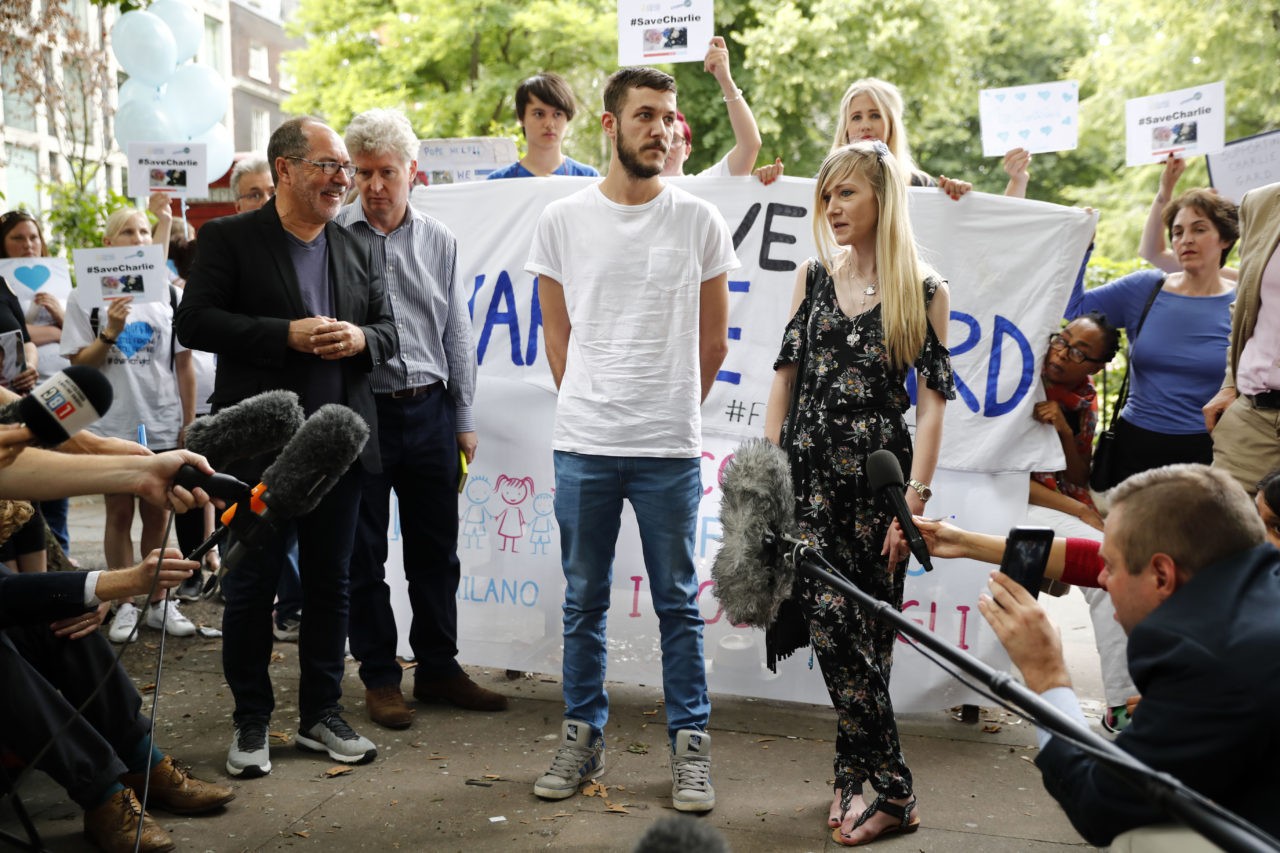 Doctors at the hospital in London, however, are determined to block the trip and ensure that Charlie’s life support should be withdrawn. Hospital administrators had kept him for months whilst fighting Charlie’s parents in the High Court, Court of Appeal, Supreme Court, and even the European Court of Human Rights for permission to withdraw his life support without their consent.

Charlie’s case will be heard again by Mr. Justice Francis on Monday at 2 pm. 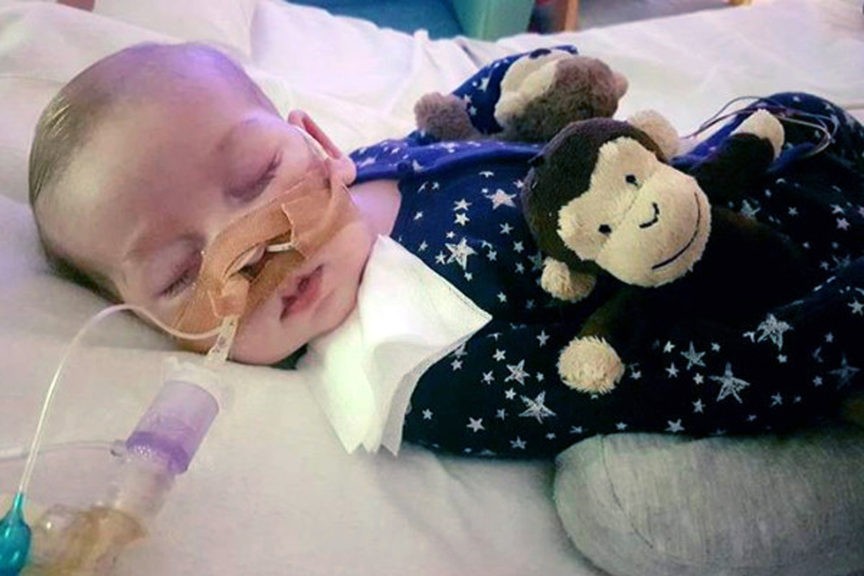