ROME (AP) — Police in southeastern Italy have arrested four suspects and seized weapons to head off more gangland-style murders in a region popular with vacation-goers where four people were killed, authorities said Saturday.

Carabinieri Col. Marco Aquilio told Sky TG24 TV the arrests Friday night were part of a crackdown ordered by the national government in the Puglia region after a pair of innocent witnesses and two others were slain earlier in the week in the Gargano area, the “spur” of the boot-shaped peninsula.

Italy has sent in nearly 200 police, including Carabinieri that specialize in anti-mafia operations in the mountainous and forested terrain of Sardinia and Calabria.

“They are an elite corps, expert in (criminal) roundups and searching for fugitives,” Aquilio said.

He said the four suspects who were nabbed Friday were “about to carry out executions” of rival mobsters. “They were armed to the teeth,” Aquilio said.

The alleged target of Wednesday’s deadly ambush was a suspected mobster who was gunned down along with his brother-in-law as they drove along a country road. Two local farmers who were believed to have accidentally witnessed the slayings tried to flee in their vehicle, but the alleged attackers gave chase and fatally shot them. 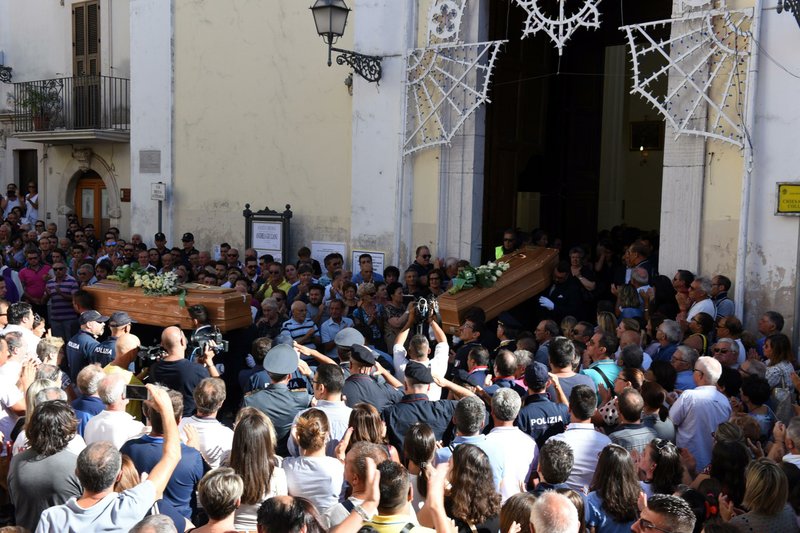 People attend the funeral service of Luigi and Aurelio Luciani, two brothers who were killed by gunmen after they apparently witnessed other two murders, in the southern Italian town of San Marco in Lamis, Friday, Aug. 11, 2017. Italian news agency ANSA quoted investigators as saying that the brothers were chased down by four of five killers and shot to death. (Annamaria Loconsole/ANSA via AP)

Milan’s Corriere della Sera newspaper reported Saturday that shortly after the slayings, a frightened French motorist stopped police to report she had just seen four hooded men with automatic weapons. It was unclear if the tourist had witnessed the slayings.

But anti-mafia prosecutors say the region also is home to mobsters whose dangerousness is often underestimated. For generation’s, Italy’s southern Adriatic coast, across from the Balkans, has been a landing area for smugglers.

Local criminals formed their own clans or sometimes formed alliances of convenience with members of Italy’s internationally known crime syndicates, including the Calabrian-based ’ndrangheta and the Casalesi clans from the Naples-area Camorra, to smuggle arms, drugs, bootleg cigarettes and other contraband, according to investigators.