Up till recently, Chipotle used to be by far my favourite fast food chain. But then it started venturing into areas which have nothing whatsoever to do with tasty, overstuffed burritos – making straight people feel bad about not finding crude, leering, gay penis jokes funny; making legitimate gun-owners feel bad about carrying guns; campaigning against GMOs; etc.

Unfortunately, all this has had the effect of raising my consciousness to such high levels that I can no longer eat their produce for fear that I might be endorsing the cultural appropriation of honest peasant food which should rightfully only be consumed by peoples of Mexican heritage; or that the workers who ask you whether you want black beans or brown beans on your tortilla may be being exploited; or that some animals might inadvertently have been harmed during the making of its pulled pork and shredded beef fillings.

In this spirit, I hope you will join me in signing this Change.org petition – kindly brought to my attention by Steve Milloy – urging Chipotle to remove from its menu such known carcinogens as pork and beef, which we now know from the World Health Organization belong in the same terrifying risk category as tobacco, asbestos and plutonium. 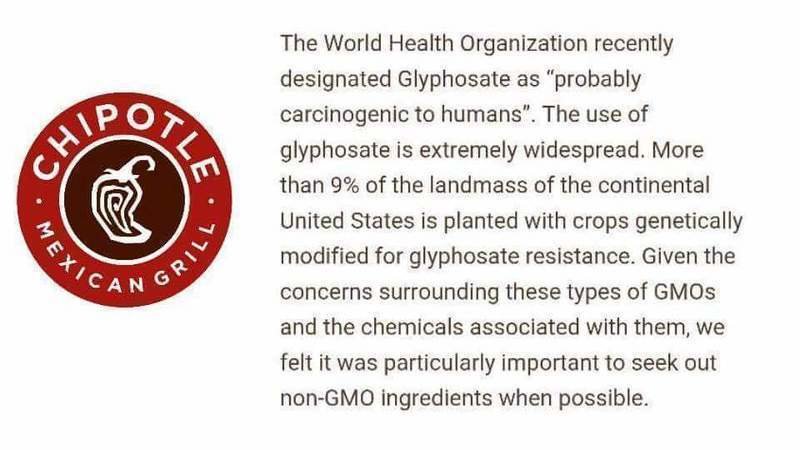 Just as GMOs were removed from most of their menu items because glyphosate is a class 2A carcinogen, pork and beef now need to be removed as well. Given the concerns surrounding red meat, and the herbicide tolerant mutagenic sun flowers used to cook it in, we feel it is particularly important to seek out alternative ingredients.

My only concern is that some of the signatories of this noble and worthy petition appear to be doing so in a spirit of snark rather than wholesome earth-caringness.

Here are some of the comments so far:

I’m signing because “Stupid” has got out of control and Chipotle is leading the parade of stupid down the path of fear. Yes Chipotle, responding to the demands of idiots only makes you an idiot (and your shareholders are starting to notice!)

I’m signing this petition because I want Chipotle to know how absurd your marketing is – find a REAL cause that will make a REAL difference in our great Nation. Your marketing has been sadly pathetic and now the double standard you face will just dig you in deeper.

Get off the ridiculous ideological rant and just sell your food – those who you were trying to market to will be the first to throw you under the bus. The rest of us who like your food — are just hungry. Don’t chase us away.

End the pandering to hipster bs crowds who think they’re getting better or “healthier” product because of the way they misrepresent it. One for all, all for science!

Please, stop poisoning the environment and THE CHILDREN!!

I hate class 2A carcinogens! I will not put up with any of them in my food!

Are you listening, Chipotle?