The declaration by Poland’s most powerful politician, Jaroslaw Kaczynski, aimed to damage the prospects of his long-term political rival just days before a decision is made on Tusk’s future.

Tusk’s 2 ½-year term ends in May. He is the only candidate for the position and enjoys general support. Tusk was Poland’s prime minister from 2007-2014, coming from a centrist, pro-EU party that is the main opponent of Kaczynski’s ruling conservative Law and Justice party.

Kaczynski claimed that now, against “elementary EU rules,” Tusk was interfering in Poland’s internal affairs and backing the opposition.

Tusk “cannot count in any way on our backing or on a lack of our objection,” he said. 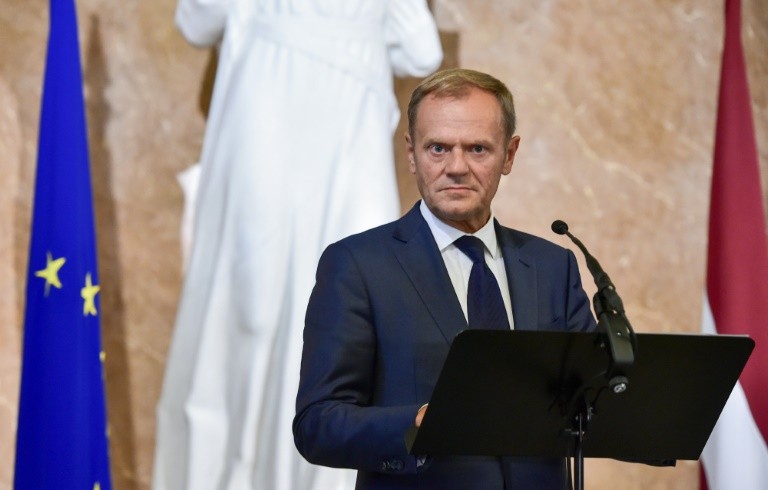 Poland’s objection alone could not prevent Tusk from getting a second term confirmed at the March 9-10 summit – and not even if Poland’s political ally Hungary also objected, which does not seem likely. But a general consensus is always preferable in the appointment.

During his first term, Tusk helped guide the 28-member bloc through difficult Greek bailout negotiations as the nation was facing the risk of being relegated from the shared euro currency zone. He has also kept a relatively steady EU ship in the wake of Britain’s surprising decision to leave the bloc.

In the eyes of many in Brussels, Tusk’s frank statements on top policy issues have brought new energy to the EU and his sometimes halting English has given a human touch to an institution often seen as too bureaucratic.

The only minor complication to his reappointment seem to be EU’s political mathematics: the European People’s Party that backs Tusk already has other members in top EU positions, with Jean-Claude Juncker heading the European Commission and Antonio Tajani as president of the European Parliament.