Queen Elizabeth II and U.S. President Donald J Trump have delivered speeches at the Royal Banquet praising the enduring American-British alliance which was forged over 70 years ago during the Second World War.

On Monday evening, President Trump and the First Lady arrived at Buckingham Palace and participated in a procession with the Queen before dining with 170 guests from the political, business, and economic world.

Before dinner commenced, the Queen delivered a speech and offered a toast to President Trump and the First Lady.

Recalling that visits by American presidents always remind her of the “close and long-standing friendship between the UK and the U.S.”, the Queen said she was “so glad” to have “another opportunity to demonstrate the immense importance that both our countries attach to our relationship”. 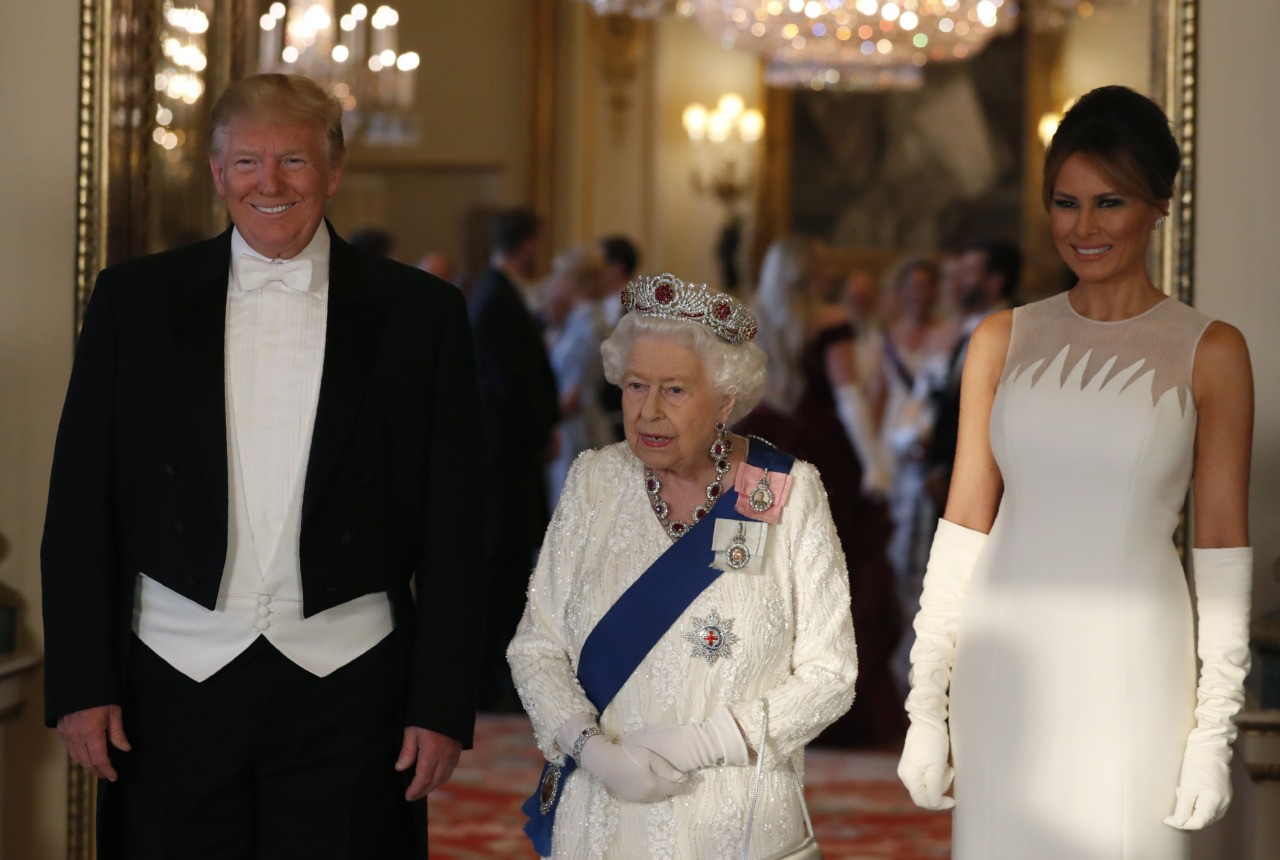 LONDON, ENGLAND – JUNE 03: Queen Elizabeth II (C),U.S. President Donald Trump (L) and First Lady Melania Trump (R) attend a State Banquet at Buckingham Palace on June 3, 2019 in London, England. President Trump’s three-day state visit will include lunch with the Queen, and a State Banquet at Buckingham Palace, as well as business meetings with the Prime Minister and the Duke of York, before travelling to Portsmouth to mark the 75th anniversary of the D-Day landings. (Photo by Jeff Gilbert – WPA Pool/Getty Images)

The President’s State Visit has been timed to coincide with commemorations for the 75th anniversary of the D-Day landings, which took place on June 6th, 1944.

The Queen recounted that she had paid her first State Visit to the United States during the presidency of Dwight D. Eisenhower, the war-time army general, and said: “In his headquarters in St James’s Square, not far from Buckingham Palace, British and American officers worked closely together to plan the freedom of a continent, and it would be no exaggeration to say that millions of lives depended on their common endeavour.”

Remarking on the two countries’ “strong cultural links and shared heritage” — including the President’s own “particular connection to this country” through his Scottish mother — and economic ties, the Queen said: “Mr President, as we look to the future, I am confident that our common values and shared interests will continue to unite us.

“Tonight, we celebrate an alliance that has helped to ensure the safety and prosperity of both our peoples for decades and which I believe will endure for many years to come.” 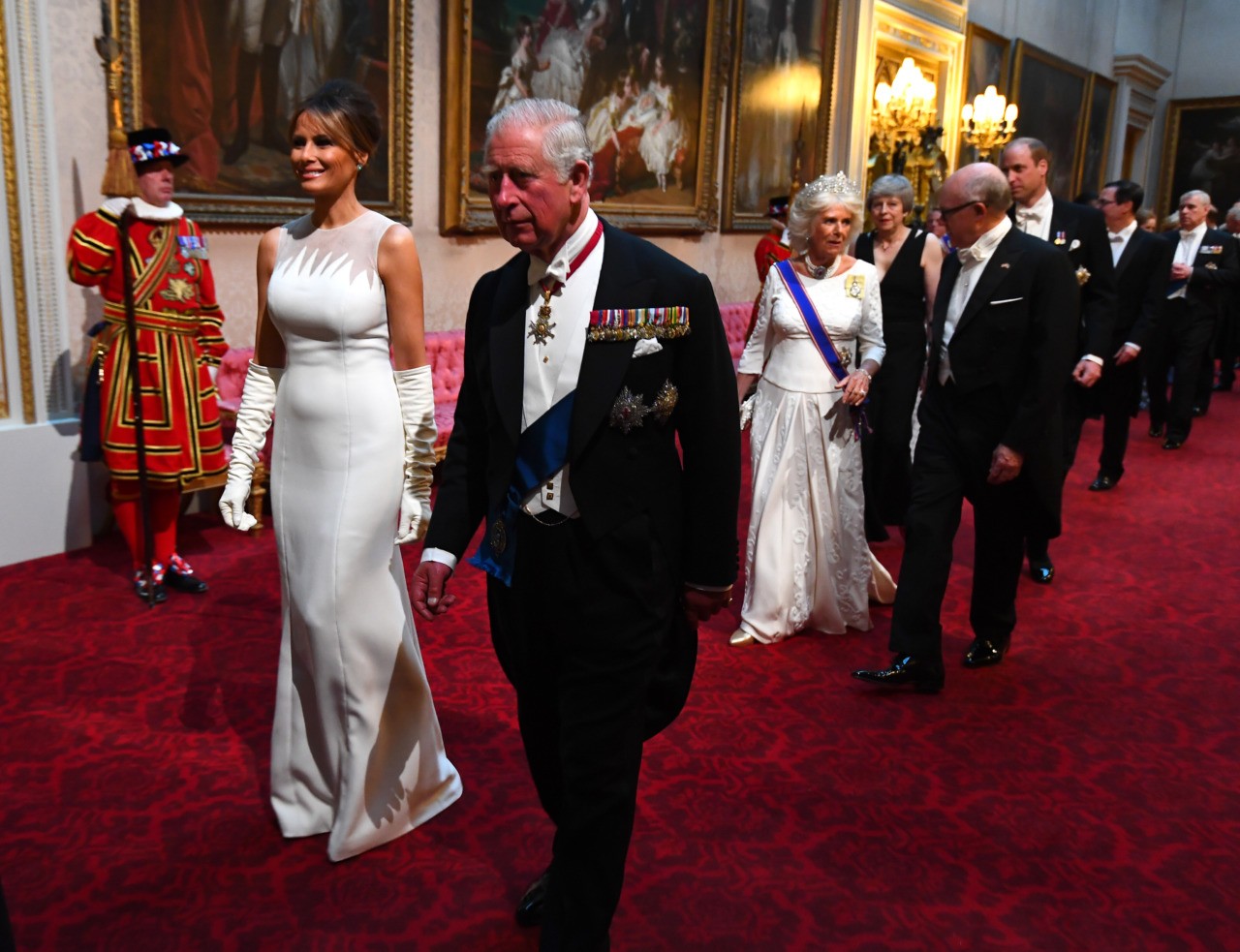 Britain’s Prince Charles, Prince of Wales (2R) walks with US First Lady Melania Trump (L), followed by Britain’s Camilla, Duchess of Cornwall (3L) and US Ambassador to the UK Woody Johnson (5L), Britain’s Prime Minister Theresa May (4L) and Britain’s Prince William, Duke of Cambridge (6L) and other guests as they arrive through the East Gallery during a State Banquet in the ballroom at Buckingham Palace in central London on June 3, 2019, on the first day of the US president and First Lady’s three-day State Visit to the UK.  (Photo by VICTORIA JONES/AFP/Getty Images)

The Queen then invited guests to rise and drink a toast to the President and Mrs Trump, “to the continued friendship between our two nations” and to the “health, prosperity, and happiness of the people of the United States” as the U.S. national anthem was played by the orchestra.

After a brief interlude, President Trump replied to Her Majesty the Queen that he and Melania were “profoundly honoured” to be her guests.

He then thanked the Queen for her “warm welcome and beautiful weather” and for Her Majesty’s “nearly seven decades of friendship with the United States of America”.

The President returned to the theme of the D-Day landings, saying:

“This week, we commemorate a mighty endeavour of righteous nations and one of the greatest undertakings of all of history.

“Seventy-five years ago more that 150,000 allied troops were preparing on this island to parachute into France, storm the beaches of Normandy, and win back our civilisation. Your Majesty will remember the British people had hoped and prayed and fought for this day for nearly five years.

“When Britain stood alone during the Blitz in 1940 and 1941, the Nazi war machine dropped thousands of bombs on this country…

“In that dark hour the people of this nation showed the world what it means to be British. They cleared wreckage from the streets, displayed the Union Jack from their shattered homes, and kept fighting on to victory. They only wanted victory.

“The courage of the United Kingdom’s sons and daughters ensured that your destiny would always remain in your own hands.” 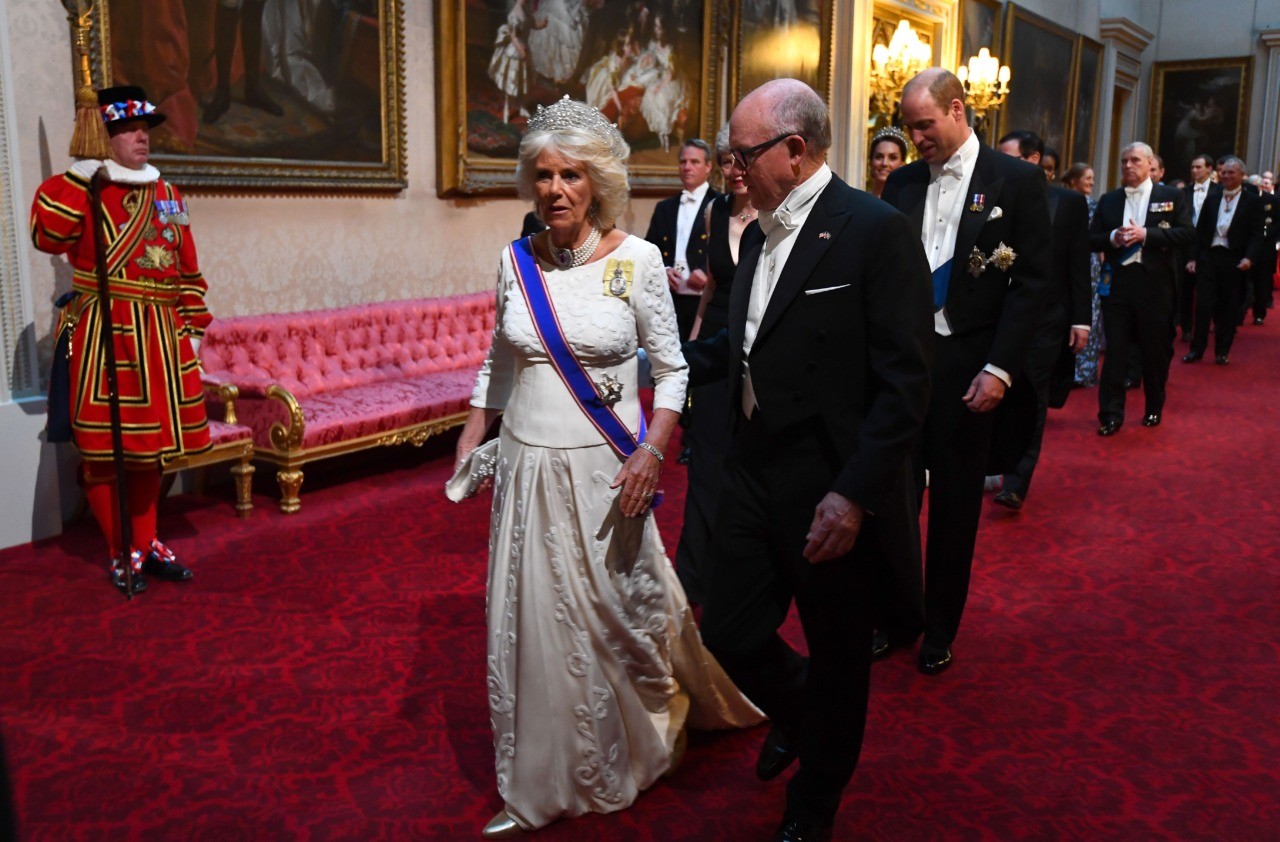 Britain’s Camilla, Duchess of Cornwall (L) walks with US Ambassador to the UK Woody Johnson (3L), Britain’s Prime Minister Theresa May (2L), Britain’s Catherine, Duchess of Cambridge, (6L) and Britain’s Prince William, Duke of Cambridge (4L) and other guests as they arrive through the East Gallery during a State Banquet in the ballroom at Buckingham Palace in central London on June 3, 2019, on the first day of the US president and First Lady’s three-day State Visit to the UK. (Photo by VICTORIA JONES/AFP/Getty Images)

President Trump paid tribute to the Queen as a “great, great woman” and also honoured her husband’s, Prince Philip’s, “distinguished and valiant service” in the Royal Navy during the war.

President Trump continued: “This evening, we thank God for the brave sons of the United Kingdom and the United States who defeated the Nazis and the Nazi regime and liberated millions from tyranny. The bond between our nations was forever sealed in that great crusade as we honour our shared victory and heritage.

“We affirm the common values that unite us long into the future: freedom, sovereignty, self-determination, the rule of law, and reverence for the rights given to us by Almighty God,” he said, adding that the Queen represented “a constant symbol of these priceless traditions”.

“She has embodied the spirit of dignity, duty, and patriotism that beats proudly in every British heart. On behalf of all Americans, I offer a toast to the eternal friendship of our people, the vitality of our nations, and to the long-cherished and truly remarkable reign of her Majesty the Queen.”

‘… to the health, prosperity and happiness of the people of the United States.’ 🇺🇸 pic.twitter.com/xmHDUEzSnX