Cities across Europe have been ravaged by Black Lives Matter protests and riots, ostensibly in support of protests over the death of George Floyd, a citizen of the United States in the city of Minneapolis.

Activist groups across the European continent and in the United Kingdom have used the death of Mr Floyd to stage large scale protests in clear defiance of national lockdown regulations imposed on regular citizens during the Chinese coronavirus pandemic.

Leftist groups have taken the opportunity to link instances of police violence in the United States with the situation faced by illegal migrants in Europe. Yet the protests seem to have taken on a life of their own, divorced from the original pretext. As British journalist and author Douglas Murray told the UK’s Talk Radio on Monday:

“The protests now are completely divorced from the original issue. Almost everybody I can think of, I have heard from, is united in being horrified by the manner in which George Floyd was killed, by the policeman who detained him. But the death of one man in Minnesota at the hands of one policeman is not a reason for people to — in their thousands — to turn out in cities across the world, certainly across all of Europe… repeatedly day after day.”

Cities across Europe that have seen such protests include: 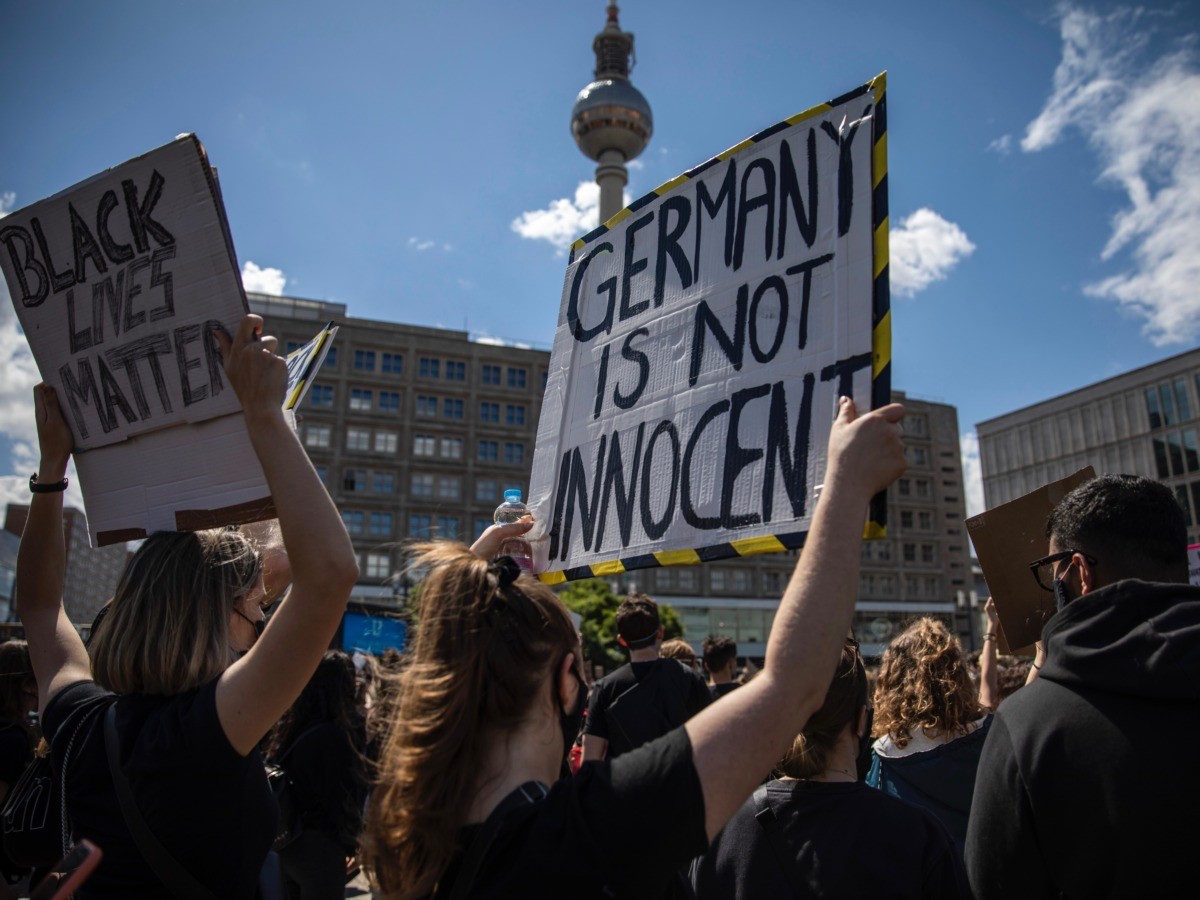 BERLIN, GERMANY – JUNE 06: People protest against racism and police brutality on June 06, 2020 in Alexanderplatz in Berlin, Germany. Over 10.000 people attended a demonstration in German capital. (Photo by Maja Hitij/Getty Images)

On Saturday, an estimated 14,000 people gathered in the German city of Hamburg, with similar protests emerging in cities such as Berlin, Frankfurt and Munich. In Berlin, agitators threw stones and bottles at officers, resulting in the injury of a police officer and a press photographer, who suffered a blow to the head.

The Black Lives Matter protests in Hamburg saw 47 people arrested for breaching the peace and some for violating the Explosives Act.

The protestors shouted slogans such as “No to racism! Together we are strong”, while proclaiming their “solidarity” with the wider protest movement against racism, the black community, and migrant refugees in Germany, according to the German newspaper Die Welt.

The Hamburg police said that they were forced to use pepper spray against the “aggressive and disguised” mob during the BLM protest, saying: “with all understanding for emotions: attacks on police officers are not acceptable!”

Elsewhere in Germany, soccer players for the German Bundesliga league took a knee before the opening of a match between Borussia Dortmund and Hertha Berlin, mimicking the protest led by American football player Colin Kaepernick and other athletes in the United States. The footballers donned t-shirts with the phrases: “no peace, no justice” and “united together”. 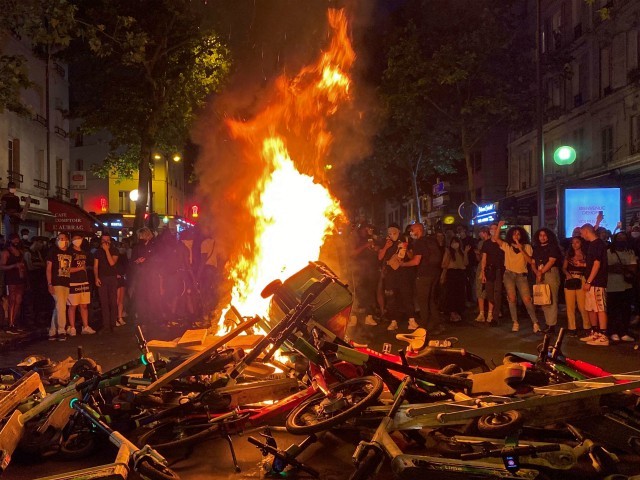 TOPSHOT – Protesters burn trash bins, shared scooters and bicycles on June 2, 2020 after a demonstration against police violence and in memory of late US citizen George Floyd who died a week before after a Minneapolis police officer knelt on his neck. (Photo by MOHAMMAD GHANNAM/AFP via Getty Images)

In Paris — the city that birthed violent left-wing radicalism during the French Revolution in the late 1700s — an estimated 20,000 Black Lives Matter protesters took to the streets over the death of George Floyd on June 2.

As is typical in the French capital, the protests quickly turned violent, with demonstrators setting fires in the streets, attacking a police station, and injuring officers.

The protesters attempted to link the death of George Floyd with the death of a 24-year black man Adama Traoré, who died after fleeing from French police in 2016. Contrary to the narrative presented by the activists, an official report found that Mr Traoré died from heart failure as a result of an underlying health issue rather than at the hands of the police.

The large scale protest turned riot was organised by a total of 195 pro-migrant activist groups, who sought to link supposed racial injustice in the United States with the situation of illegal migrants in France.

The government of French President Macron reportedly took a lax approach to the riots and protests over fears that enforcing the coronavirus national lockdown rules would result in more widespread violence.  Ministers were also instructed to refrain from publicly condemning the left-wing violence to prevent adding “fuel to the fire”. 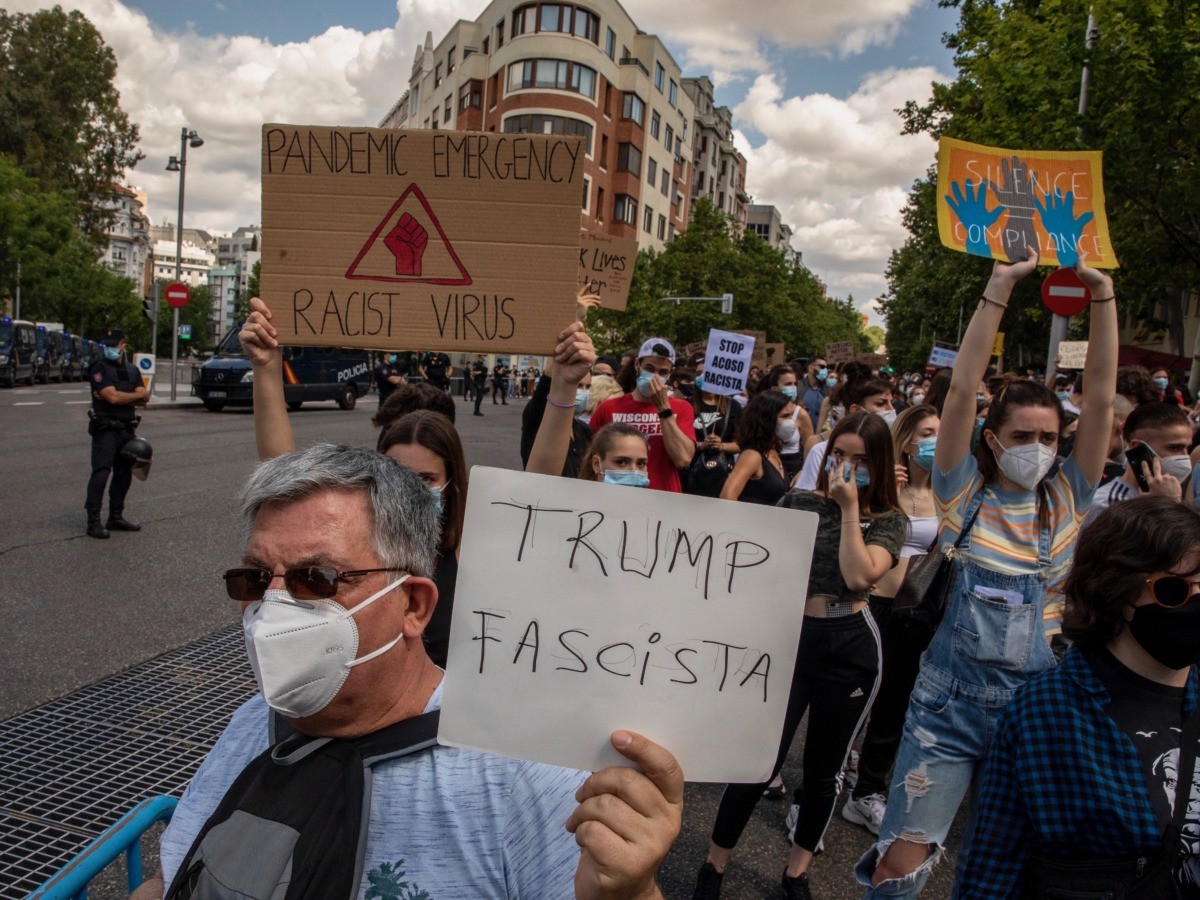 In Madrid, thousands gathered outside the United States embassy on Sunday, calling for an end to “fascism” and the alleged racism of President Donald Trump, clearly violating the government’s instructions which permitted the protest but forbade the gathering of more than 200 people.

A student activist leader, Coral Latorre, said in a speech to the crowd: “We are here to unite with the brothers and sisters from the United States, to point out the racists, Donald Trump. Santiago Abascal,” she said tying the leader of the populist right-wing Vox party with the American president.

The protestors chanted slogans such as “No human being is illegal,” and “Here are the anti-fascists”.

The demonstrators again attempted to link instances of police brutality in the United States with the conditions illegal migrants face in Europe, with chants of “the immigration law kills people every day” heard throughout the Spanish capital.

“It’s easy to link the death of George Floyd with the deaths in the Mediterranean of 14 people in El Tarajal,” remarked a protester, referring to a group of illegal migrants that drowned in 2014 while trying to swim to Spanish territory.

The local branch of Antifa in Madrid urged on their members to join the protest calling for justice for “all murders to racialised communities by the United States and the system”. 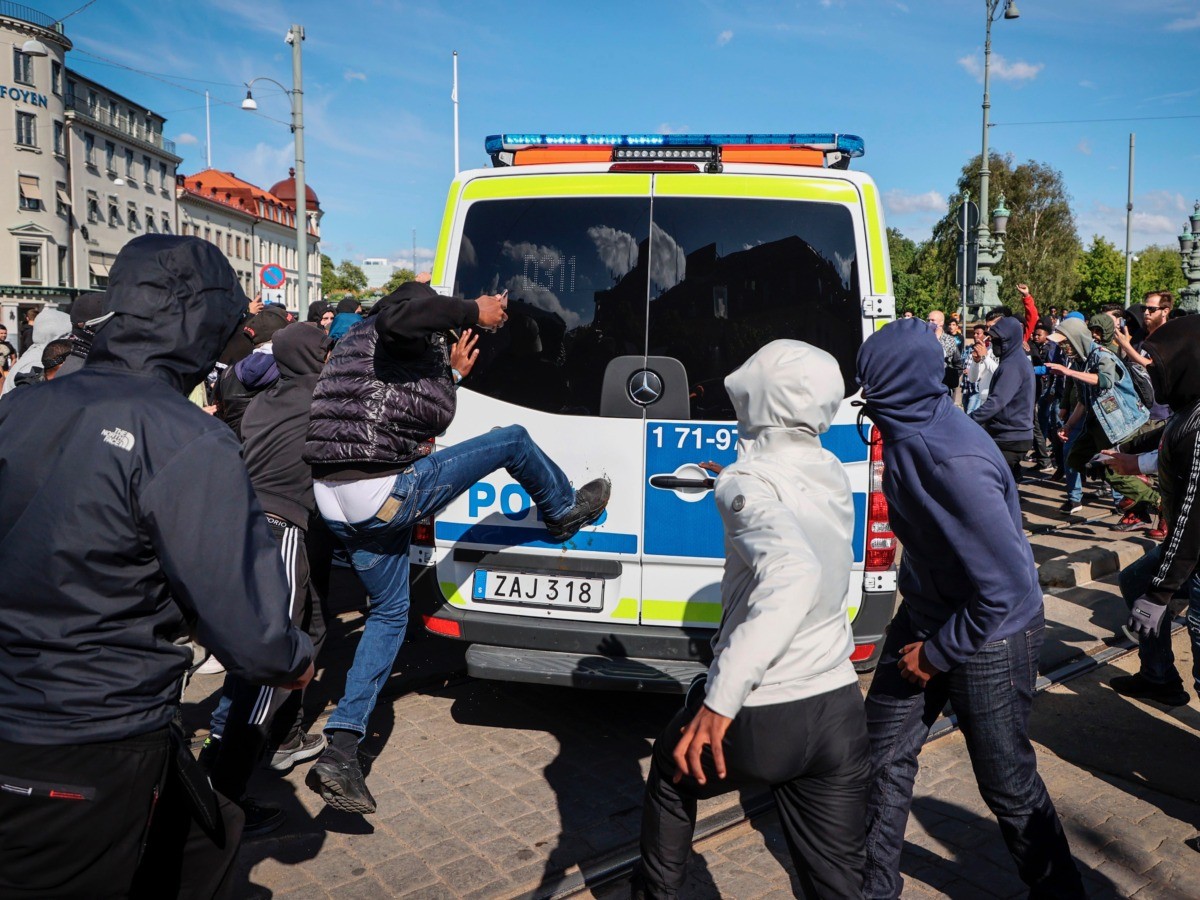 Demonstrators attack a police car during a anti-racism demonstration on June 7, 2020 in Gothenburg, Sweden (Photo by ADAM IHSE/TT News Agency/AFP via Getty Images)

In Gothenburg, Sweden riots broke out during a Black Lives Matter protest and thugs took to shattering glass window storefronts and looting valuables.

The police had permitted the protest, with the caveat that the gatherings could consist of no more than 50 people to keep in line with the government’s policy on the Chinese coronavirus.

However, after police attempted to enforce the social distancing measures the protesters turned violent, attacking police officers and vehicles, as well as attempting to pull up pavement stones in order to use them as projectile weapons, according to Swedish paper Expressen. The local police chief defended the force’s record, insisting he had not foreseen the fact there could have been violence at the protest and was caught unprepared.

Footage of the riots were widely shared on social media, with one clip allegedly showing a group of men attacking a moving van of a Swedish family and destroying their possessions.

The protests in Gothenburg followed similar demonstrations in the multicultural city of Malmö and the Swedish capital of Stockholm. During the Stockholm protest, a female officer was pictured taking a knee in front of activists, parroting similar moves by law enforcement in the United States.

Horrific. Peaceful Black Lives Matter and Antifa rioters punch a police woman in the head and keep beating her while she's on the ground while other officers flee in Gothenburg, Sweden. pic.twitter.com/u5WnlblTrj 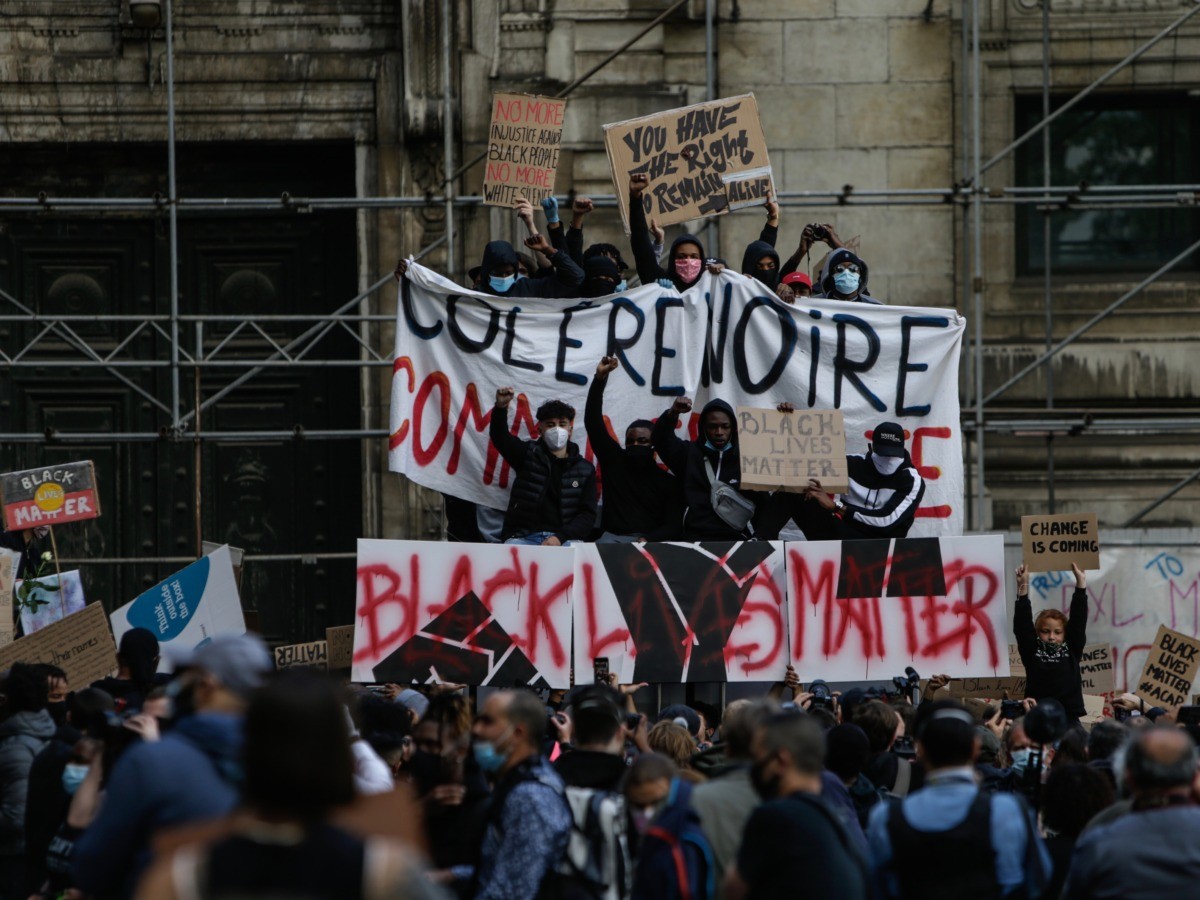 People take part in an anti-racism protest, in Brussels, on June 7, 2020, as part of a weekend of ‘Black Lives Matter’ worldwide protests against racism and police brutality in the wake of the death of George Floyd, an unarmed black man killed while apprehended by police in Minneapolis, US. (Photo by ARIS OIKONOMOU/AFP via Getty Images)

Brussels, the home of the institutions and headquarters of the European Union, which often touts its credentials as a racially tolerant institution, was not spared from the riots ravaging European nations over the death of George Floyd.

At least 150 people were arrested during the rioting that ensued from the Black Lives Matter protest. Thugs were witnessed setting fires, breaking windows, and looting stores in the racially diverse Matonge area of the city.

Police were forced to use water cannons to disperse rioters after being attacked by the violent mob.

A further 100-150 protestors were arrested in the city of Antwerp during another BLM protest on Sunday.

Fire and smashed windows on Chaussee d’Ixelles in #Brussels as police move in on a small group of protesters. #BlackLivesMatter #Belgium pic.twitter.com/2FFXDLMW1k 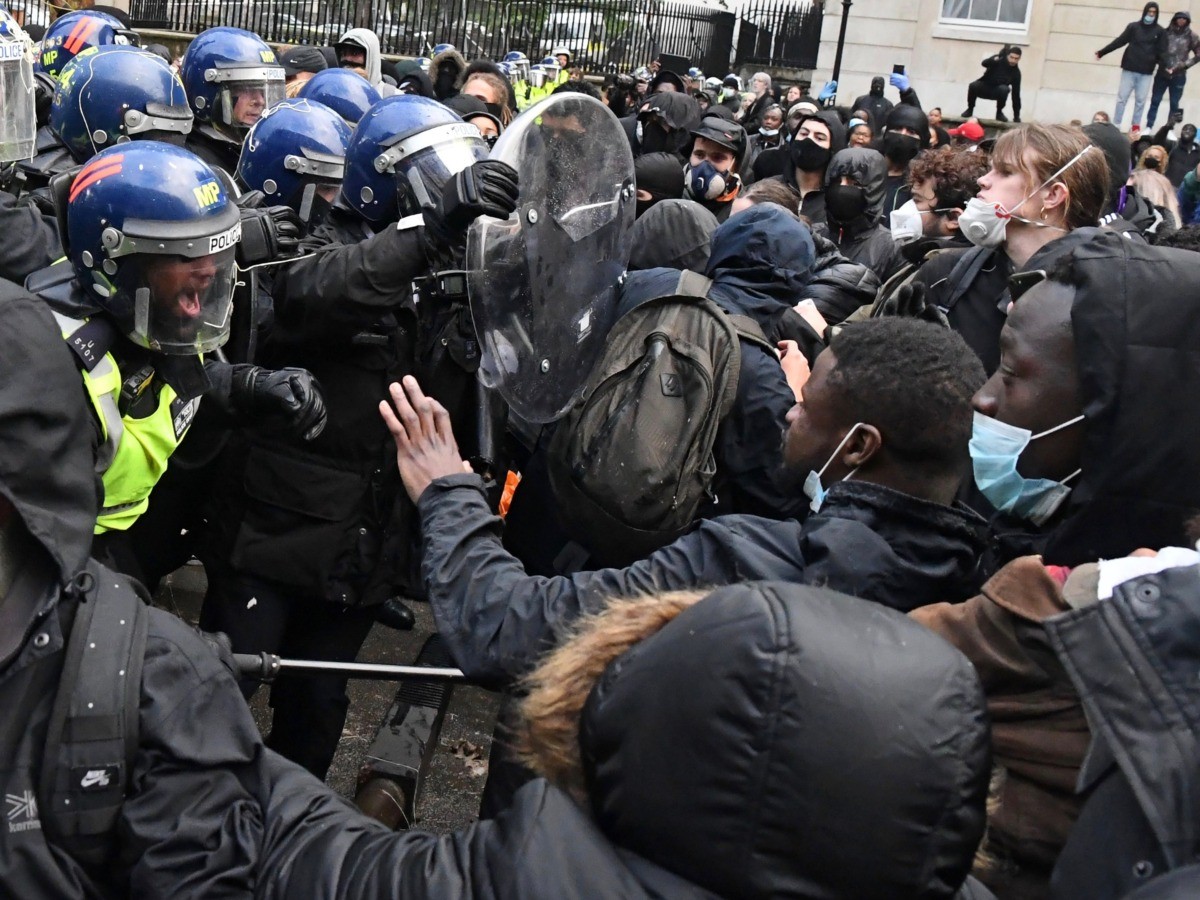 Protestors scuffle with Police officers in riot gear near Downing Street, in central London on June 6, 2020, during a demonstration organised to show solidarity with the Black Lives Matter movement in the wake of the killing of George Floyd, an unarmed black man who died after a police officer knelt on his neck in Minneapolis. (Photo by DANIEL LEAL-OLIVAS/AFP via Getty Images)

The British capital was also racked by violence over the weekend, with protests descending into anarchy on Saturday and Sunday.

The mainstream media in the UK attempted to gloss over the acts of violence and vandalism by those in attendance, notably by the BBC which characterised the protests as “largely peaceful” despite 14 police officers being injured during the fighting.

Activists vandalised London with Black Lives Matter graffiti and defaced national monuments including statues of Sir Winston Churchill and Abraham Lincoln, as well as the Cenotaph, the United Kingdom’s national war memorial, where protesters were filmed attempting to burn the British flag.

Black Lives Matter demonstrators in Bristol tore down a statue of Edward Colston, a 17th century British parliamentarian and philanthropist over his ties to the slave trade.

On Sunday, police in London were chased through the streets by the left-wing radicals who chanted “run, piggy” as they pelted officers with makeshift missiles.

There have also been calls from self-proclaimed ‘radicals’ to defund the British police, as has been floated by leftist activists and politicians in the United States.