President Donald Trump left the White House on Saturday afternoon for a round of golf after spending four days watching the election returns come in.

But he did have a message for his followers.

“I WON THIS ELECTION, BY A LOT!” he wrote on Twitter before arriving at his golf course in Sterling, Virginia, at 10:39 a.m.

I WON THIS ELECTION, BY A LOT!

The Associated Press captured a photo of the president on the golf course.

The president spent the days since Election Day watching his big leads in states he needed to win shrink as Joe Biden ultimately flipped them in his favor.

Currently, Biden leads in Georgia, Pennsylvania, and Arizona — key states the president needs to get the 270 votes necessary to win.

The president left the White House as corporate media outlets remained hesitant to call the race, as uncounted ballots remain in the states of Nevada, Arizona, Georgia, North Carolina, and Pennsylvania.

Earlier Saturday, the president expressed his frustration with the voting in Pennsylvania in a series of tweets, quickly censored by Twitter: 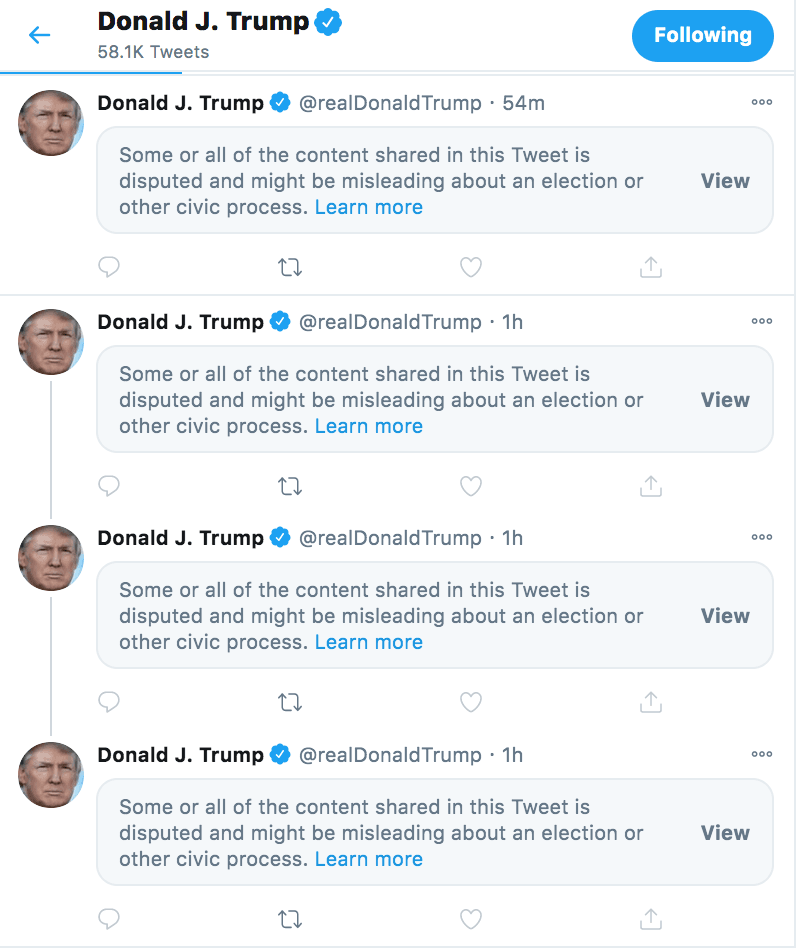 The president also wrote a message on Facebook: “Tens of thousands of votes were illegally received after 8 P.M. on Tuesday, Election Day, totally and easily changing the results in Pennsylvania and certain other razor-thin states. As a separate matter, hundreds of thousands of Votes were illegally not allowed to be OBSERVED. This would ALSO change the Election result in numerous States, including Pennsylvania, which everyone thought was easily won on Election Night, only to see a massive lead disappear, without anyone being allowed to OBSERVE, for long intervals of time, what the happened. Bad things took place during those hours where LEGAL TRANSPARENCY was viciously & crudely not allowed. Tractors blocked doors & windows were covered with thick cardboard so that observers could not see into the count rooms. BAD THINGS HAPPENED INSIDE. BIG CHANGES TOOK PLACE!”