Oregon Connections Academy, a K-12 online public school supported by digital learning giant Pearson, posts on the “enrollment” page of its website that due to Gov. Kate Brown’s (D) Executive Order 20–08, as of March 27, no Oregon public school students may “withdraw or enroll” in any schools during the school closure due to the coronavirus pandemic. 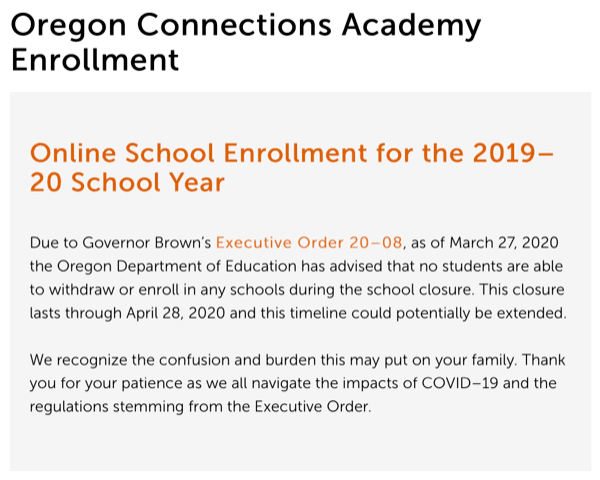 The report continued that online public charter schools were required by the governor’s order to stop providing their regular instruction to their online students because brick-and-mortar public schools had to close to prevent spread of the infection caused by the current coronavirus:

Marc Siegel, a spokesman for the Oregon Department of Education, confirms that although Brown’s order did not explicitly call for the closure of online charters, state education officials believe that is the intent of the governor’s order.

“Executive Order 20-08 closed all public schools, including virtual charter schools,” Siegel says in an email to WW. “Virtual public charter schools can continue to provide supplemental education and learning supports just as other public schools have been asked to do.”

On March 30, Willamette Week reported the ODE was now informing all schools to prepare for full at-home instruction of children.

“The about-face comes as the department concedes a ‘strong possibility’ that kids will have to remain at home for the remainder of the school year,” the report noted.

“We now have a moral imperative to meet the changing nature of the pandemic and evolve our approach to serving our children,” Colt Gill, director of ODE and deputy superintendent of public instruction, told the Willamette Week. “This calls for a shift from providing supplementary education to a formidable effort to provide Distance Learning for All.”

Nevertheless, the Wall Street Journal editorial board observed Tuesday that the “Oregon Education Association and its labor allies” had blocked children from learning online.

While all Oregon public school children may now learn online, the governor’s order bans traditional public school students from transferring permanently to online charter schools, should their parents determine that education option works best for them.

The WSJ editorial board added:

Under pressure from the unions, the Oregon Department of Education stopped allowing transfers on March 27. At Oregon Connections Academy, this means some 1,600 students who had sought to transfer won’t be able to, says Jeff Kropf, the school’s founder and president of the board of directors.

The Oregon teachers’ union makes no mention of delivering instruction to students in its “three key priorities” during the coronavirus crisis. The union’s priorities are: protecting students and teachers from exposure to the virus; maintaining the delivery of meals to children who were provided with them when school was open; and ensuring teachers are kept “financially whole.”

U.S. Education Secretary Betsy DeVos weighed in on the report of the Oregon teachers’ union’s attempt to rein in charter schools:

Surely this must be an April Fools' Day joke or just #FakeNews, right? No one would deny kids access to education right now because the unions asked them to, right? https://t.co/9USviy10AJ

Breitbart News reached out to Siegel at the ODE, who responded:

The state uses an equitable, weighted funding model to ensure schools and districts receive funding to support their students. Under guidance published by the Department on March 26, 2020, virtual public charter school enrollment was paused beginning March 27, 2020 through the remainder of the extended closure. The primary reason for this closure is to ensure students are able to access the supports they need locally without creating further school funding disruptions that would be created by the transfer of students from one school to another.

Union President Alex Caputo-Pearl, in a letter sent to Los Angeles schools Supt. Austin Beutner on Thursday, said it would be unfair to approve new charter schools without an opportunity for board members to hear from community members. Currently members of the public are unable to gather and it could be difficult for them to participate in scheduled board meetings, which probably would take place by video- or audio-conferencing.

The union has historically attempted to clamp down on charter schools in Los Angeles.

Luis Vizcaino, spokesman for the California Charter Schools Association, said, according to the Times, that the union’s stance was “shameful and offensive”:

UTLA leadership needs to get its priorities straight during this unprecedented health crisis, focus on all students, and apologize to the kids and families they have continuously targeted. We are better together, and we need leaders who unite, not divide, our community to meet this moment.

In Pennsylvania, while online charter schools were already delivering instruction to students when the coronavirus outbreak hit, state officials warned the charter schools they should not attempt to recruit new students during the shutdown of the brick-and-mortar schools.

According to Pennlive, an emergency bill approved by the Pennsylvania House and Senate and signed by Democrat Gov. Tom Wolf, froze payments to school districts based on enrollments on March 13, the day schools were shut down.

“That means cyber charter schools could accept new students during the shutdown, but they would not get compensated for those students until the shutdown is lifted,” the Pennlive report added.

The PA Coalition of Public Charter Schools said while online charters were not attempting to profiteer, they should not be punished for their expertise in online learning at a time when that type of instruction is in demand.

“We accept that cyber charters will not get paid for any new students,” said Ana Meyers. “Are we happy about it? No. We would like to be paid for kids we’re educating.”

The pressure by teachers’ unions and advocates of brick-and-mortar public schools to suppress the influence of other education options during the pandemic comes as DeVos recently announced new rules clarifying that distance learning opportunities should be offered to all students during the school closures, including those with disabilities.

It was extremely disappointing to hear that some school districts were using information from the Department of Education as an excuse not to educate kids. This is a time for creativity and an opportunity to pursue as much flexibility as possible so that learning continues. It is a time for all of us to pull together to do what’s right for our nation’s students.

“Nothing issued by this Department should in any way prevent any school from offering educational programs through distance instruction,” DeVos added. “These are challenging times, but we expect schools to rise to the occasion, and the Department stands ready to assist you in your efforts.”